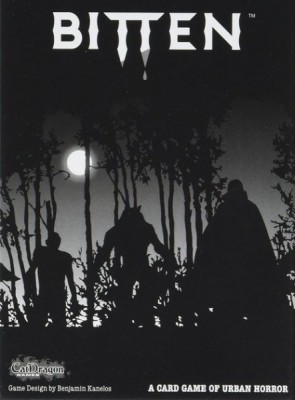 Does this look infected to you?

I was headed to game night via my usual route, you know, cutting across the moor at midnight. When, all of a sudden, some...thing...bit me. I'm not exactly sure what it was. Might have been a werewolf, they are thick this time of year. Then again, it did make a squishy kind of sound, so could have been a zombie. Of course, it may have been a vampire, they have been migrating further and further south each year....That, in a nutshell, is exactly how Bitten: A Card Game of Urban Horror DOESN'T start. It does, however, put you in the role of one of the three mentioned factions. And one of the keys to winning is keeping your true allegiance (and appetite) hidden in this social deduction/card drafting title.

The card drafting mechanic seems simple enough, each player is dealt a hand of five recruit cards. One, two or three of the factions are represented on the cards. Each player picks one card and then plays them to one of the five starting locations. Each location has a set number of cards (usually 5) that are required to fill it. Once that number is reached, you add up the total showing for each faction and the highest number takes control of that location. Securing three locations triggers the end game. Of course, it isn't REALLY that simple.

Bitten, despite being about securing sites for your clan, is more about deception than domination. In addition to these hands that you draft from and then pass to the player to your left each round, you also have your "Lair." It starts with a single card, the role you have been assigned. However, each round instead of playing a recruit card into a location, an opponent can choose to add it to your lair. If you are outnumbered by a rival faction in your lair when you trigger the Control the City Victory condition, you lose, giving your opponents a Destroy your Enemies victory. This is why the Hidden Role/Social Deduction portion plays a key part in the game. Since every card you play to a location is open information, players will quickly deduce which faction you are aligned with...or will they? This leads to a weird dynamic of attempting to disguise your true motives. It might start with something as simple as playing a card with both a Werewolf and Vampire to a location, letting the other players try to deduce which faction you are actually aligned with. But how far will you take it? Will you secure a location for the Werewolves when you are truly a Vampire just to "sell" the werewolf narrative? With the inclusion of Slayer cards, which allow you to remove any card from a location, it almost becomes a game of chicken to see how long you can impersonate another faction before attempting to pull it back to your side.

If anything, the game is too reliant on the hidden role mechanic. All three win conditions hinge on your lair. The Secure your Lair win involves having at least three cards played into your lair and managing to outnumber the other factions on those cards. The rub is that you can't play cards into your own lair. You can, however, get rid of them. You can choose to play cards out of your Lair at the beginning of your turn by deciding not to look at the drafted hand but, instead, view your lair and play a card from there instead. If your opponents have correctly guessed your faction, these cards are going to be skewed against you, making them painful to play into an open location, since it will usually assist your enemies.

Supporting 3 to 6 players, you never know (except in a 6 player game) if you have a "teammate," someone who is aligned with the same faction you are. Calling them a teammate is too strong of a word; there can be only one winner in a Control the City victory, the person with the most of their legion in the lair. And, with everyone trying to keep their allegiance a secret, it rarely even feels like you are working together.

The gameplay leads to some interesting situations. I've seen players forced into a Control the City victory by an opponent after they had overloaded them with Liar cards, causing them to lose via the Destroy Your Enemies condition. Or players engaging distinctly as one faction only to declare a Secure your Lair victory because of the cards played on them by opponents. It may take a few games before everyone catches on that it is more about conning than conquest. And some players never will be won over the "Victory by technicality" win conditions. It has plenty of "Why did you?" and "I should have..." moments to fuel discussion regardless of the outcome.

With a stark black and white art style, each monster represented in silhouette. It looks like something that would flit across the screen while you were adjusting the rabbit ears to bring in the late, late show off of some distant UHF station. I guess it fits the classic black and white aesthetic of horror movies but it reminded me more of Xeroxed concert flyers from the 80's. With its lo-fi aesthetic adding some atmosphere, Bitten clocks in at about 10 minutes per player and plays well at all player counts, making it excellent filler on game night.

ETA: Also it is only like $6 on Amazon - Bitten on Amazon

Sagrilarus replied the topic: #275842 20 Jun 2018 14:46
I'll get this for my daughter. She's playing a whole bunch of games in the Ultimate One Night Werewolf genre, this should fit in nicely. Sounds more interesting too.
Read More...