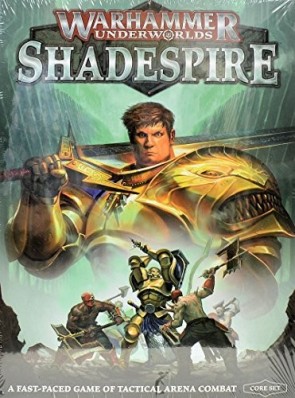 One of the best tactical games on the market.

My first play of Warhammer Underworlds: Shadespire was a disaster. It was at GenCon; I sat down to learn the game and found myself mostly frustrated. My Bloodreavers seemed designed to charge in and get to bleeding, but they could barely scratch the Stormcast and were getting 1-shot left and right. As I played I found myself wondering why multiple people had texted me to find time to play. By the end of the game I was fascinated. I wanted to play again but didn't know why.

In many ways, Shadespire feels like a box full of contradictions. It's advertised as the ultimate competitive game and yet it's full of pivotal moments decided on a roll of a single d6. It's a game of tactical movement and positioning, yet your activations are limited to a scant 12 in an entire game. Move and you can't move again that round. Charge and you can only attack once. A key element of strategy is building a deck, but you can't duplicate any cards and you won't draw through it unless you sacrifice actions. The same holds for your objective deck, ostensibly the strategic focus of your deck.

How does this game even work?

Brilliantly, as it turns out. All those constraints and seeming contradictions pack more tension and meaningful decisions into a 30-minute skirmish than most 2-hour games I've played. With such a limited set of actions and options, every single move you make deeply matters. With so many 50/50 - or worse - rolls, it's a game won in the in margins. The player who manages to position just right will bend the odds in their favor at just the right time. Drawing that card you needed becomes so much more powerful than a single attack.

This game rocks. Fast paced and tactical, the action starts early and never lets up. I've seen leaders taken out on the first action. Warbands eliminated by the end of Round 2. Reactive card play that burns a full hand of cards and leaves the board a tortured mess of rattled dice and broken dreams. I've played every warband, in almost every matchup. I've played at home in the basement, and in local tournaments. I've never had a bad game.

It's been almost a year since Shadespire hit shelves and it's changed quite a bit. Games Workshop kept up a regular release schedule that brought us to a total of 8 warbands. With one exception, none of them can be neatly packed into descriptive boxes like "Aggressive", "Defensive", or "Mobile". That exception are the Ironjawz and I'll forgive the design team for ensuring that the Orruks is best at krumpin' and smashin'. That began in the core set. Where most games might balance around an offensive faction and a defensive one, the Stormcast are actually better at both. It's odd to get used to but offers ample opportunity to dig into a faction and crack open a few strategies.

Shadespire has a few flaws, but they're relatively minor. Card templating is inconsistent creating the perception of rules ambiguities where none exist. There are a few universal cards that perform the same effect as a faction specific one, only better. When reaching for a particular card effect, I'd rather grab a faction-specific card than a general one as it reinforces faction identity. I'm splitting hairs however.

We've reached the point where the initial Shadespire product is complete. All of the existing cards and warbands were designed together, and the balance is sharp as a knife. There's more coming but GW is holding their cards close to the vest. An announced cards-only expansion is going to add effects that focus on each faction's leaders, and rumors of a new core set abound. I'm in for all of it; no game has hooked me as hard as Shadespire since my first few rounds of Netrunner. That's a game I played competitively for 3 years. I swore off competitive scenes and yet now find myself circling tournament days on the calendar and even competing for the painting awards.

I've yet to regret a moment spent on this game. From playing, to painting, to building decks in the passenger seat of a car on the way to an event, Shadespire has dominated my gaming life since it came out. It's no exaggeration when I say that every game of Shadespire has one of those stand-up dice rolls, where you get up out of your chair and rock back and forth hoping to imbue that damn stupid cube with just the right amount of juju. It's a damn good thing I listened to those GenCon texts and sat down to play.

Raf Cordero tripped over a SmallWorld box about 3 years ago and fell face first into a pile of Netrunner cards. He discovered a world of cardboard and plastic that he hasn't had any desire to leave yet. When he isn't gaming, he's hanging out with his wife and newborn son in the vast suburbs of Chicago. His other hobbies include homebrewing and watching his Blue Devils play all the various sports he was terrible at as a kid. You can hear his musings on games at www.dinganddentcast.com.

Matt Thrower replied the topic: #275747 19 Jun 2018 09:52
I really like Shadespire precisely because it does indeed pack so much into such a small package. But I can't really agree that it's all in the margins: there's a lot of randomness in the game, and it rolls a winner in a significant minority of plays.

When it's only 30 minutes to play, though, that's not a significant flaw. Unless you're a tournament player.

rafcordero replied the topic: #275818 20 Jun 2018 11:08
Sorry I realized that may have come off as terse and I didn't mean it to. Rolls can absolutely decide an individual round, but in best of 3 formats I haven't had it rear its head as bad.
Read More...