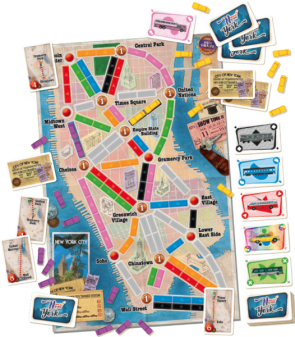 The Big Apple gets little.

"I think I can play this without your help."

That was what my son, age eight, said to me two turns into playing a game of Ticket to Ride: New York. We were playing with his sister, age six, and it was their first game of Ticket to Ride anything. They'd never experienced the honey draft of two rainbow cards, the smug satisfaction that comes with blocking a key route, or drawing ticket cards you already have linked up.

"Have you played this before daddy?" asked my daughter.

I explained to her that I first played the game 14 years ago but that it was a longer version that has a map of the United States. She wanted to know if there were boards for every country and if we could get them. I told her that if they liked this version, which is a US-only Target exclusive that sells for $19.99, I'd see about getting them one of the larger games.

"I've been trying to get green all game and you took them!"

He felt that first sting of turns wasted, of being thwarted by the classic passive-aggressive draft. I questioned why she wanted to build a longer route from Chinatown to Wall Street but she assured me that she had a plan. I had to remind both of them to draw new ticket cards, and reinforced the risk of ending the game with unfinished tickets. But they picked up the flow and concept pretty quickly, and we never really had to bother with the rulebook, styled to look like a vintage travel brochure.

It was over in about 20 minutes. The little board - much smaller than any Ticket to Ride board to date - was filled with little taxi cabs and we talked about how we had been to every place on the map. I had to remind them about visiting Chelsea Market and Brooklyn. I won pretty handily, not that I cared. We had fun.

This is a microgame version of Ticket to Ride, and while it is true that you don't get the long-term planning or the satisfaction of linking up disparate rail lines, losing the subtle depth of the 2004 Spiel des Jahres winner doesn't necessary blunt the simple, accessible quality of the core design. You do the same things, but it's smaller and faster. Each player only has 15 taxis to place and the number of routes is obviously quite limited. The only mechanical addition is that tourist attractions on your routes give a bonus point. Maybe that was in one of the fifty other Ticket to Ride games that have come along over the years, but I've never seen it before. It seems like three players is just right for the size of the map and the available routes, but you can do two or four players.

I like this little game, with the emphasis on little. I've never been a huge Ticket to Ride fan, wavering between not liking it at all to becoming borderline obsessed with the IOS game. The length and scope are really about all of the Ticket to Ride I care to bring to the table. I think it is also a fantastic introduction to the game, probably better than the more pandering First Journey games in this series. The setting, as in all of these games, is irrelevant but I like that it is specifically New York, 1960.

It's not a game the world needs. Heck, it's not even a game my family needs. But we enjoyed it and the box is small so we can make room for it. Most importantly though, both kids asked me later that evening "can we play Ticket to Ride again tomorrow?"