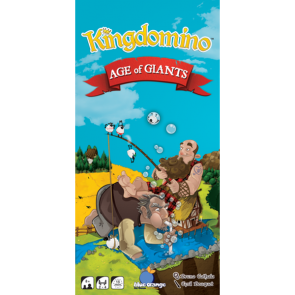 A Little Game Gets Slightly Bigger

Queendomino was a misstep. 2017 Spiel des Jahres winner Kingdomino is great because it takes a mechanic everyone knows - dominoes - and applies it to a simple area scoring game. But for the standalone expansion, designer Bruno Cathala kind of went the wrong way with it and turned into something closer to a middleweight Euro, trying to punch above its class but not quite connecting. Blue Orange is bringing the next add-on in the Kingdomino line to the US and the good news is that Age of Giants isn't just a step in the right direction - it's an expansion that bumbles like a giant into the kingdom of must-have content.

Out of the box, it could be argued that the domino dispensing tower that Age of Giants comes with is its best feature. It's a sturdy cardboard thing with a magnetic closure. You stick all of the dominos from the base game and Age of Giants in it and simply pull new ones from the bottom when you are refilling the display. It's tidy, cool, and it feels deluxe. It's a simple thing, but this is a game of many simple things so it definitely counts.

In terms of actual game content, the giants are the stars of the show, and not just because they are big, screen printed meeples. These clumsy oafs wander into your kingdom when you take a tile (always among the first in the display, as they are lettered instead of numbered). They squash a crown and render it useless- potentially reducing your score. However, If you draft a tile with footprints on it, you may chase a giant away into someone else's kingdom, where he can squash one of their crowns. It's a very mild take-that element that adds just a touch of aggression and interaction to a game that may not have needed either, but can certainly accommodate both. With my family, I cannot foresee a session of Kingdomino that does not include the giants. They are a permanent addition here.

The other feature in the expansion are endgame goal tiles. Some of these were in the original game, in the rules. But now you have a range of special scoring objectives that may find you trying to keep your castle in a corner, having certain land types in certain positions, or even scoring territories with no crowns. These objectives add just enough crunch for seasoned players, and for newcomers they offer additional scoring opportunities. These are another "always on" addition for my games. They are fun to play with and some can be quite challenging to achieve- but are rewarding in equal measure.

If you are going to force me to complain about something, all I've got is that the domino tower doesn't fit into the base game box and the base game contents don't fit into the expansion box. So that makes this simple little backpack game into a two box affair. It's too big for its britches now, but then again this a game about giants so perhaps that's some kind of meta-thematic nod. It also is somewhat tricky to incorporate with Queendomino, but to be honest that game stands on its own without additions as it is.

I'm surprised by Age of Giants- it's delightful and indispensable, and I was of the mindset that Kingdomino didn't need anything added to it. I can't quite shake the fear that it will be subject to a Carcassonne-like cavalcade of mixed quality content addendums, but for now Kingdomino fans can expand their games with the surety that Age of Giants adds meaningful, excellent gameplay elements without messing anything up.

edulis replied the topic: #278841 31 Jul 2018 14:09
Good review. Kingdomino has been a pretty big hit in the library, less so at home. Glad to hear the expansion is good, I like the idea of the being able to take away crowns.

edulis wrote: Good review. Kingdomino has been a pretty big hit in the library, less so at home. Glad to hear the expansion is good, I like the idea of the being able to take away crowns.

Yeah, I really like the sound of it from the review. Shame it costs almost as much as the base game!
Read More...