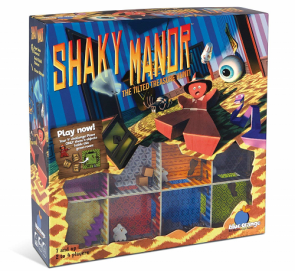 We're all standing around the table shaking these cardboard haunted house trays, each sectioned off into a 3x2 grid of rooms. Colorful language abounds as the pieces in each player's tray rumble around as if these spook houses are along the San Andreas faultline on a bad day. We're all trying to get a little witch meeple into a specific room along with an assortment of ghosts, eyeballs, snakes, spiders, and treasure chests. I almost get everything together but then an eyeball rolls in. I shake it away into another room but doing that brings a couple of unwanted guests into the mix. Finally, my daughter declares she has the requirements and gets the point.

This is Blue Orange's Shaky Manor, released in Europe to a Kinderspiel des Jahres nomination under the title Panic Mansion. And it's a well-deserved nod because it's a brilliantly simple, obnoxious little game practically guaranteed to delight kids and frustrate adults into accidentally swearing around the young ones. It takes about one minute to explain, set up, and play. Don't come into Shaky Manor expecting to nod thoughtfully and smugly execute a clever move. This is simply not that kind of game and it shouldn't be rated against designs of that nature.

The design is really quite brilliant because of how it is executed. Each object's shape, weight, and material react differently to the shaking. Those $#@#$ snakes are shaped in such a way that they inconveniently block doorways or catch other pieces. The eyeballs roll sometimes uncontrollably. The spiders are rubber, and have a little bounce to them. All of the wooden pieces sometimes slide like you want, and other times stubbornly refuse to move. 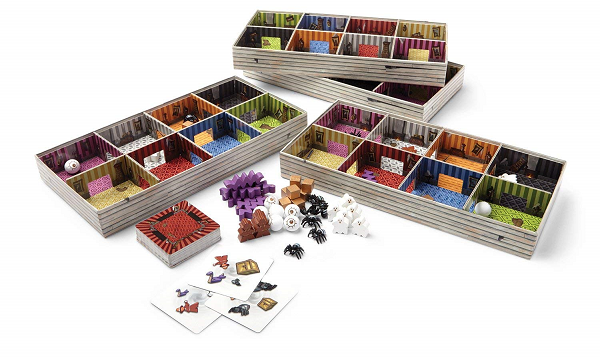 Also brilliant is the way that this game is packaged. I don't think I've ever seen a game where you can actually play it while it is in shrinkwrap. Windows on the box show you one of the trays, preset with everything in it, and pretty much all of the basic rules right there. Shake the box, and you are playing the game. I love this.

Shaky Manor is all things considered closer to one of those zany Zoch or Haba dexterity titles that seems almost too dumb to be fun, but the appeal is undeniable and even the most furrowed-brow hardcore gamer might crack a smile if they lower their geek-guard enough. There aren't enough games out there that have a lunatic concept like shaking a haunted house to get a witch into a room with a couple of eyeballs and a spider. And that's a shame.
There are a couple of variations that scale up the difficulty, but I think after a couple of 10 minute games players will likely settle on the game type that best suits their group. Families with small children can play a very simple version where you simply have to get the witch into a room with treasures and no monsters. I think you could get a three or four year old to play this, but beware of tears - it can be unusually stressful. The sort of median difficulty finds players having to combine an assortment of elements on a card into a designated room. This is where most players will find the sweet spot, I think. The "hard" version is using the same variety of cards but the goal is to get everything to a room except what is pictured. There's a cognitive layer there that makes this quite tough when the shaking gets hectic.

I'm sure there's a contingent out there who will scoff and debate whether Shaky Manor is a filler game or an activity but pay no heed to these spoilsports. This is a fun game for everyone, smartly designed and loaded with laughs. It's absolutely deserving of its Spiel Des Jahres nomination.

Is it a correct assumption that this is multiplayer solitaire?

mads b. replied the topic: #279467 08 Aug 2018 08:30
It's not. You compete to be the first to accomplish a specific goal (like having your adventurer and all three treasures in a certain room). The first to, I think, five cards (five goals completed) win the game.

I played this recently with my 6 and 9 year olds and we all loved it. Also the balancing is super clever. Whenever you win a round, another player gets to choose a "monster" to put in your mansion. It might not seem clever, but that extra monster adds enough difficulty to help the others quite a bit. And since you choose, you can choose the ones that seem to cause the winner the most problems. I fucking hate those spiders, for instance.

Black Barney replied the topic: #279473 08 Aug 2018 09:59
Emily (7) and I play this all the time, she plays with her grandmother sometimes too. You're right to warn about the tears at an early age. Emily used to cry a lot when she'd lose at this, I think it's the stress of being so close and trying to race the other person. With young kids, game "A" is better than game "B" since the latter requires a little analysis so adults have a big advantage. Game "A" is just getting the adventurer (who Emily calls the Inspector) and 3 treasure chests in the room.

I bought this at the same time as two other kids games and this one had the flimsiest parts. The box is always really hard to open, there is no obvious place to place the card deck when storing the game. And the rooms don't exactly 'lock' into place with the walls and doors, so often it will lift up and pieces slide or get stuck underneath while playing.

I think the coolest thing is how different the monsters move around. Emily hates the eyeballs cuz they roll so much and are hard to control (I find them very easy for that reason to manipulate). I hate the snakes the most cuz they block doorways and add way too much volatility to the game (either the blocked doors help you or hurt you). The ghosts move the same way as the adventurer which makes them very annoying when they get in the same room as him since they move too similar. The most misunderstand and nightmare-ish monster are the spiders cuz they have rubber feet so, just like real spiders, they can stick to the floor and walls more than the others. Which means when you're tilting the mansion, those blasted spiders will stay in the room when everyone else pours out of it. Very clever.

I don't especially like the game, but i'm not the target market. Emily is ALWAYS asking for it (in fact she asked me 20 minutes ago to play), so it's a big hit. I think 4 stars is right on the money. I would dock it points for the flimsy parts. I have my two nephews coming next week and am curious how the game will handle boys.
Read More...