Warhammer 40k: Kill Team - The "In the Box" Review 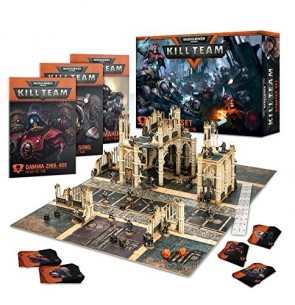 That was my first reaction to opening Games Workshop's just released starter set for their new 40k skirmish game, Kill Team. Even after a couple of years into what I would most definitely and without apology call a new Golden Age for the miniature-mongering Nottingham company, they still manage to surprise me even after stunning box set productions like last year's 8th edition flagship box and the Age of Sigmar 2nd edition Soul Wars intro, that floored us just a couple of weeks ago. What blew me away this time was the sheer volume of Sector Imperialis terrain in the box, even compared to what was in last year's Shadow War: Armageddon package- and the fact you even get a double-sided playmat in the box to fill up with this amazing new modular scenery. Along with two factions, neither of which are Space Marines or Chaos, this has got to be the most all-in-one bundle that GW has ever offered. In fact, I believe that this boxed set may be the best single way for newcomers and lapsed gamers to get a taste for the Warhammer hobby.

I'm really impressed at how many barriers to entry this set overcomes in one fell swoop. Barring hobby supplies like sidecutters and glue, you have every single thing you need here to get this game onto the table and fast. You don't even need to secure a gigantic buffet table that won't fit into your apartment or dining room to play as a standard Kill Team game plays in a space less than half the size of the hoary 4'x6' standard that has stood for many years. Newcomers don't have to worry about figuring out what to build out of the kits as both teams can be built with standard loadouts and their datacards are already filled out- even their names. The terrain is simple to build, and represents a tremendous improvement over the old Cities of Death kits that could be fussy. It is molded in a tan color that looks at least decent without a lick of paint, but these buildings look awesome with a simple primer/basecoat/wash/drybrush finish.

I can't praise the terrain enough. It's true that it represents the somewhat overplayed Grimdark ruins trope, but the sculpts are excellent and I love that it feels completely customizable. I built my kit to the included instructions, but while doing so I thought about all kinds of cool things I could do with another set. It's crucial to note that this stuff is highly playable- it's tall enough (really as tall as you want it to be) and with enough broad floor space to accommodate multiple figures. And when it's glued up, it's also very stable. If you've played with the Azyrite Ruins or the Ryza Ruins kits, the Sector Imperialis set feels like a definite evolution.

As for the remainder of the sprues - it's a miracle there's even room for them in the box - the AdMech and Genestealer Cults Kill Teams are full sprue kits with all options. But they are also molded in colored plastic, so you can tell them apart on the table without painting them. I think this is a tremendous boon for folks that want to play the game but not paint, and it puts the game closer to a board game sensibility. I'm also impressed with the faction choices here because both are somewhat newer factions and both are somewhat out of the "mainstream" Games Workshop offerings. I like this because it invites lapsed 40k players into the game with a sample of what they may missed, and also because it gives players that may already have large armies an opportunity to paint and enjoy models they may otherwise not collect. It's a little disappointing that no new models were introduced here for this release, but the terrain more than makes up for that deficiency.

With that said, I believe that Games Workshop has been cleverly setting up Genestealer Cults to challenge Space Marines for dominance- these guys are among the most versatile and prolific models in the game, usable in 40k, Necromunda, Space Hulk, and Kill Team. I wouldn't be surprised if they came up with rules to add them into Warhammer Quest. Fortunately, this kit (Neophyte Hybrids) is one of the best troop kits GW has ever produced. I've built three sets of these, and I love the range of options and the personality the models have. They have a great 1970s sci-fi style with mining suits straight out of a Moebius comic.The cybernetic AdMech team is also a cool kit, and I like that the stock Kill Team lets you build them out as both Skitarri Rangers and Vanguards. This way you can build some with a variety of weapons including their awesome looking Radium Carbines, Galvanic Rifles, and Plasma Calivers. Both teams include faction lore books and a set of unique tokens to play the game.

Now, as for the rulebook- the only letdown is that it isn't hardback, but the quality is exactly what you would expect overall: best-in-business graphic design (loving the orange and black color scheme), tons of actually readable (and interesting) fluff, and a really quite small rules section. I'll dig more into what those rules mean in part two of this review, but if you like the recent GW approach of offloading complexity into faction-specific rules and options, you will be pleased to find that Kill Team continues this trend. Along with the basic rules, there are also specifics for fighting in Sector Imperialis, running Kill Team scenarios, and a smattering of campaign guidance. However, if you are expecting the campaign rules (and details such as wargear and equipment) to be as extensive as Necromunda or Shadow War, you might be disappointed- these sections are shorn down to the minimum. For my part, I think that's a good thing.

In another nod toward accessibility, the rules also include lists for every faction. Well, no Daemons allowed as of right now it seems, but everyone else is here and you have a few more choices than Shadow War provided. It's great to have all of the rules for every faction including specializations and some tactics choices in one place and not out on a PDF or in White Dwarf, and I especially like touches like the random name generator for each faction. Yes, these could also be used as baby name generators if you are completely insane and want to christen your child in the Catachan fashion, "Lance Cage" or "Brent Steeljaw". There are also old-school tables to give your Kill Team members various backgrounds and dispositions- none of which have game effects, but add some fun flavor. More importantly, there are tons of options to give your Kill Team members specializations, expanding your tactical options and providing lots of long-term depth and development should you choose to play through a campaign.

It's an all-in package and unlike Shadow War last year, it feels like this is going to be an ongoing, supported concern for Games Workshop. It feels like they pulled out all of the stops to make an attractive, valuable package that should please the kid for whom this is their first Warhammer purchase all the way up through the most long-tooth veteran. So, as the final word in the product review of Warhammer 40k: Kill Team..."damn".

Next: Reviewing the Game.