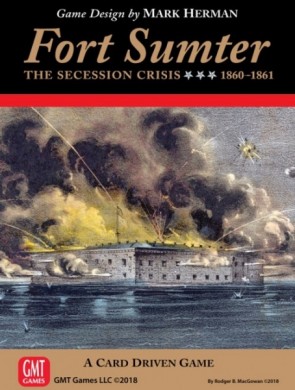 Epic conflict, not so epic playtime.

It's an old cliché that we shouldn't judge a book by its cover, and while this is technically true, it's also sort of not true. Because actually, the cover of a thing gives us a lot of useful information: what the publisher thinks of it, who the publisher thinks its audience is, and what this audience might expect to find inside. Fort Sumter might have one of the most misleading boxes in recent memory. It's designed in the GMT house style. Let's call it wargame-formalism. This means the cover features minimal text framing a period lithograph depicting the bombing of Fort Sumter. The entire thing screams "grandfather's study;" see it on a shelf and you might imagine it smells like scotch and polished hardwood, and that if you crack the box open a cloud of cigar smoke might leak out. It looks altogether like a Very Serious Production.

And while the subject matter is very serious indeed (and is treated with considerable thoughtfulness and respect, both in-game and in the generous reference book), Fort Sumter's hook is its accessibility: it takes the card-driven game--a genre normally associated with lengthy historical deep-dives, like Twilight Struggle and Paths of Glory--and reduces it down to its most fundamental elements. The box advertises a playtime of 20-40 minutes and, my god, it's not a lie. Even in my first game, when my opponent and I were still figuring out the finer details, teaching and playing took less than an hour. Later games went even faster, and I have no doubt an experienced pair of players could blast through the game in 20 minutes or so. When compared with the day-eating sessions of its bigger brothers and sisters, this is nothing less than a miracle.

In Fort Sumter, one player takes control of the Unionists and the other plays the Secessionists as they politically maneuver in the lead-up to the American Civil War. And make no mistake, war is coming--you are simply jockeying for the best position when it erupts. The game plays out on an abstracted map with twelve spaces representing particular battlegrounds, either geographical (ex. "Border States") or ideological (ex. "Newspapers"). The players compete for control of like-colored "Crisis Dimensions" by spreading influence cubes on the board in an attempt to build unshakeable majorities that will score them points at the end of each round.

Everything in Fort Sumter is resolved through card play. Both players will have a hand of cards drawn from a shared deck, with each card representing a historical personage or event. As in other card-driven games, players will take turns playing a card for either its value or, if the card matches the player's faction, its event text. This is usually a choice between flexibility or power--playing a card for its value allows you to place that number of cubes anywhere on the map, while playing a card for its event gives you a potent, but more specific, effect. For example, the "Frederick Douglass" card only has a value of 1, but if you play it for the event you can add up to 3 tokens to a single "Public Opinion" space. This makes for consistently interesting decisions, with one caveat: if a card doesn't match your player faction, you're stuck simply playing the card for its value. While this doesn't necessarily imbalance the game, it makes drawing a handful of Secessionist cards when you're the Unionist player, well, boring--I really miss the tension that games like Twilight Struggle or 1960: The Making of the President generate by allowing events to trigger even when they're your opponent's.

This necessary compromise between historical depth and quick-playing accessibility is felt throughout Fort Sumter. The game introduces some smart wrinkles in its otherwise bare-bones area control foundation. For example, in addition to scoring majorities in "Crisis Dimensions," each player receives a simple secret objective each round (always a specific space to control), and fulfilling these will grant an additional point and a special action. Another innovation is the "Crisis Track," a long line of cubes from which players draw their influence. When players breach certain areas on this track, they may receive a bonus and/or trigger a bonus for their opponent--for example, entering the "tension" zone allows your opponent to place the peace commissioner, a token that can effectively lock down a space on the board. The last curveball the game throws is the "Final Crisis" phase, where players simultaneously play cards they've saved over the course of the game in a last-ditch effort to control the board before end of game scoring.

When Fort Sumter is at its best, these design decisions create a sense of brinksmanship and danger. Between the escalating consequences of the Crisis Track and the push-pull tension of player order (the player with lowest score always gets to go second, a major advantage), you must constantly choose whether to seize the moment with an aggressive move or to hang back and let your opponent overextend themselves. It feels like a high stakes political showdown, with both sides trying to shore up their position without pushing too hard. The game, which appears to be quite simple at first, reveals itself over time to be a tense duel with the opportunity for deep tactical play. No mean feat for a game where you'll only ever play twelve cards.

However, while Fort Sumter offers an interesting set of decisions, in practice the game can often feel rather flat. Part of the appeal of a card-driven game is that you get to toy with history, replaying the past and creating a compelling alternative narrative. The cards you get in Fort Sumter are full of rich characters and evocative events, but in play they all almost all serve the same function: add, remove, or relocate a few cubes. It's all mechanically sound, but hardly the recipe for a riveting tale. I think this is the most unfortunate element that was sacrificed in this slimming-down of the CDG. I enjoyed the process of playing the game, but I never felt like I was telling a story.

Fort Sumter sits in a strange place. Wargaming veterans may find the game too simplistic, and casual folks looking for a breezy two-player game may find it a bit too fiddly. However, it's a strong and innovative design exploring the challenging space between immersive historical simulations and quick-playing games. GMT has indicated that this is the first of what will be a series of short games with big ambitions. Fort Sumter feels like an imperfect transitional step, but I'll be keeping my eye on this series--given a little more time and experimentation, they might just produce a masterpiece.

Gary Sax replied the topic: #280231 23 Aug 2018 11:48
So my concern about these games is that if you compress the push/pull tension systems like Twilight Struggle down to shorter and shorter lengths, you just naturally start to lose some of the tension. And the tension and stakes are what make these work. This is sort of related to your comment about cubes being pushed back and forth but is slightly different.

Hadik replied the topic: #280281 24 Aug 2018 06:33
Good review. Reading it makes me want to play another CDG. I am not the best at them. I’ve never come close to winning Unhappy King Charles, but I always get something from the experience and I relish the early turns. I am a decent opponent at Clash of Monarchs, at least against my old gaming partner.

I guess I agree that it’s the slow burning narrative development I love and that might get lost in such a condensed game, not to mention the theme leaves me a bit unenthusiastic.

I find the box and game name misleadingly focused on the fort itself. A siege game! No... an exploration of the political machinations leading up to the war. Pass.

Gary Sax wrote: So my concern about these games is that if you compress the push/pull tension systems like Twilight Struggle down to shorter and shorter lengths, you just naturally start to lose some of the tension. And the tension and stakes are what make these work. This is sort of related to your comment about cubes being pushed back and forth but is slightly different.

Good point--even if there is some (effective) mechanical tension, it definitely feels like the stakes are lessened. I'm curious if this is something that can be addressed or if it's simply part and parcel of a shorter game experience.

Matt Thrower replied the topic: #280375 25 Aug 2018 14:16
Played this a number of times and, personally, it made the history live a little for me. As someone who knows next to nothing about the ACW, I found the game both stimulated and - with a little reading - also satisfied my curiosity about the events depicted.

I really like it. After the first few plays I decided it's a curious design which, while not deep, as such, with its limited mechanisms, takes a different tack instead. Games are often close only a VP or two between the players, but that difference is often down to care and attention: making sure you make the most of your cards and opportunities.

AndrewMcAlpine replied the topic: #280386 25 Aug 2018 15:28
While the game didn't quite fire my imagination in the same way, it has caused me to look with deep longing at my nearly untouched copy of GMT's US Civil War, wishing I could materialize a willing opponent out of thin air.

charlest replied the topic: #280439 27 Aug 2018 09:09
I'm not the biggest fan of this game but I do find it enjoyable and respect the design. I'd be shocked if this is remembered much at all beyond being the first game in Herman's short playing CDGs.

AndrewMcAlpine wrote: While the game didn't quite fire my imagination in the same way, it has caused me to look with deep longing at my nearly untouched copy of GMT's US Civil War, wishing I could materialize a willing opponent out of thin air.

Same. I just tackled the rules on that one this week. They aren't bad except naval and supply rules.
Read More...