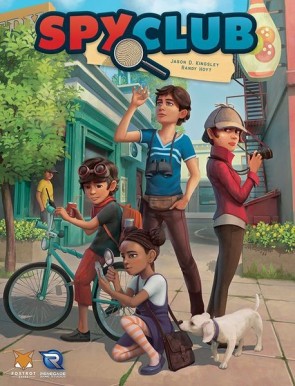 It's called Spy Club but with the picture of sleuthing kids on the box, I keep calling it Spy Kids. My own kids admonish me every time I misname it. And I misname it a lot: it's obviously a family co-operative game, so we're sitting down to play it as a family.

First we do a test run. There's a campaign system that allows you to string games together into a longer narrative, but we ignore that in favour of getting the rules down. Everyone has a hand of double-sided, coloured cards visible to all. On your turn you've got three actions which is your pick of drawing a new card, flipping any of your cards over, or playing one. Once the group has played five cards of the same colour, you've solved that aspect of the case. Solve five aspects and you win. Easy, right?

Well yes, it seems so. Everyone cottons on to the mechanics and the fact it's partly a memory game with the card-flips. We quickly solve the location - it's the park - and the object - a watch. It looks like this is going to be a breeze.

Then, everything begins to fall apart.

As a co-op game, there have to be a bunch of fail states. There's a suspect figure who moves around the cards each turn and can cause bad things to happen. Depending on what colour it stops on it can force you to discard cards and tokens and running out of either is a loss. It also has the ability to escape for good. We spot, after a while, that his movement is predictable, and you can try to arrange your cards to minimise risk. But by then, it's too late.

The card pool begins to run low and we still have three aspects to solve. With mounting horror, we realise there are still further mechanical levers to manipulate. There are shortcuts to save time under certain conditions that we've just ignored. Some colours are more common than others. We fill in a third - the crime was theft - but we've left the two most difficult until last.

Everything collapses into ignominious failure. This isn't a game that discourages a boss player, and I can't resist stepping in to try and rectify what's going on. But to no avail. The children are in dismay, not only at the loss but because of the narrative gap, never knowing the suspect or the motive. I'm enthralled. This co-op puzzle is far more challenging than it looks, and I'm fizzing to solve it. But there's too much disappointment to try again now.

So the game goes in the bag to take on holiday. Out it comes again on a rainy evening, with the wet green mountains looming outside. This time, we set up the campaign cards. The first one triggers when we solve our first aspect and it adds a fun mini-game based on spelling, which is great for the children. Plus it adds a further tool in our arsenal to solve the case.

We do much better this time, but not well enough. We're an aspect short. In the campaign, you get to keep one of your solved aspects as a fixture, which contributes toward scoring and further campaign cards. We choose the suspect, a dog, because really, why would you not choose a criminal dog when you're given the option? It powers us with enthusiasm to try again.

Picking the dog adds a new mechanic to play with, just for this case, which involves setting alarms to trap the suspect as it moves. Another simple tool and we're learning to work the ones we have much better. This game is an absolute nail-biter. We wipe off two aspects super fast, making sure we have a new one to choose at the end for maximum points. But then we're stuck. The third colour we focus on just doesn't turn up. Do we give up or start another? The arguments come close to actual co-operation, although it's still too easy to go with the alpha player.

We stick with it and find a nail-biting finish as a reward. The cards start to flow and we're close - so close! - to calling the full five when the suspect escapes. We realise that there's yet another piece of strategy to consider when choosing aspects to keep, so we go with motive, Jealousy.

The third case in our campaign is the clincher. We're getting better at putting the puzzle pieces into practice. With mounting excitement, we realise we're going to complete this one with a full house. High-fives all around, and we fill in the location of the crime, a cabin. Absorbed, we sit and chat about what these decisions might mean in real life. Obviously, a dog is unlikely to be jealous. So instead we imagine that perhaps the dog's owner is jealous, and is training the dog in the cabin. It's a wonderful shared flight of fancy.

Fourth time is a bit of a let-down. It's still exciting to play, but the campaign deck instructs us to pull out a whole bunch of cards to add. The new rules that we need to absorb badly jar the flow of the game. And to make it worse the extra mechanic they introduce isn't interesting enough to justify the effort. But still, we manage to fill in all five aspects without too much fuss.

Sauntering into the final session, we're full of confidence. It's misplaced. After we close out our first aspect, everything begins to fall apart. Our campaign cards this time mean the suspect can move twice, with the potential for bad things happening each time. We try and plan ahead, playing the odds as to where they're likely to move and shuffling our cards to minimise damage. But it keeps eluding us, moving twice, hitting the same colours and causing us to discard tokens. Our pool runs out after we've finished just three.

Still, the overall score isn't bad. And the narrative we've built: a dog trained by a jealous owner to steal watches, is a story just begging or us to flesh it out. I need to be careful when we do not to tell the kids how to go about it: it was too easy and too tempting in the game. But there are nearly 200 campaign cards in that box and a far more fascinating array of mechanical levers to pull than I'd imagined. Like any child, I fall victim to the greater temptation of a new story with another round of Spy Club.

SuperflyTNT wrote: Thanks for the heads up. My 10 year old is really getting into games now.

You don't need to be ten to play this. I would - and have - totally play it with an all-adult group.

I tried to get my daughter into Beyond Baker Street and she just flatly didn't like the idea of having no idea what your cards are. To her it just seemed like a numbers game, and she just didn't like that. Too much like maths homework!