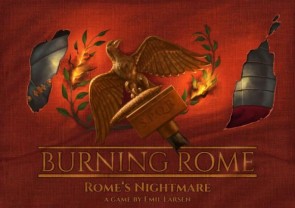 Not quite overwhelmed with its own greatness.

Burning Rome, designed by Emil Larsen and published by Sun Tzu Games, sets out to present ancient warfare as an accessible, fast-playing customizable card game. Players pick one of four factions- Rome, Carthage, Celtiberia, or Gaetuli - and build a deck from units, strategies, and a general before facing off in a 15-20 minute long battle.

Building a deck is straightforward but comes with plenty of options. Each faction has 54 cards to choose from, but the average deck will only use 15 or so. Players have 50 points to spend not only on cards but also on their Army Strength (what would be your starting life in Magic) and Command Points (which is spent in-game to play cards). I really like this extra layer of customization, as it allows players to really fine tune their playstyles and tempos for their decks. If you want to build a deck that focuses on hard hitting units that are expensive to put out you can do that but at the cost of how long you can stay in the game if it doesn't work. If you're someone who has no interest in deckbuilding, there are several lists for each faction as well as a book of historical battles that dictate which cards are used (more on that later).

The first half of a round is tense and exciting. Units fill the battlefield, divided into right flank, left flank and center sections like in a Command & Colors title. Because the game is so short, the simple choice between drawing a card and gaining more Command Points seems especially important. This is a game that rewards patience. Waiting to see what your opponent puts out and where is always preferable to putting everything out all at once and going for a big attack. The order in which you play units is important, too, as putting a new card out into a section of the battlefield will negate the special abilities of the card played before it. Some effects you will want to negate, such as the destructive nature of the Carthaginian elephants on their own army, but others you might think twice about before putting a new card into the column. Learning just how reactive this short little game is a huge part of the learning curve and that part of the game is quite satisfying.

The later turns of the game are unfortunately not as thrilling. The battlefield becomes static. Units do not take damage as they do in most games like this, instead using the Army Strength as an abstraction of your relative numbers. At the end of each turn the attack strength of all of your units in each section is totaled and the defense value of opposing units in the same section is subtracted. Whatever damage is left over is the damage done to your opponent's Army Strength. None of this is optional and while the lack of making risky attacks like in Magic might be thematically accurate, the game itself suffers for it. Combine the stagnating nature of the battlefield with the fact that you eventually hit a point where you've spent cards and Command Points faster than you can get them back, you find yourself short on options.

Luckily the historical battles help Burning Rome to regain some ground. The game includes seven battles, each with its own set decks, special rules and victory conditions. I found these games to be by far more enjoyable than games using the standard "quick rules." Several historical battles really came down the wire, where the victor was always obvious several turns in advance in the standard rules. I still wish the end game was more dynamic, but the historical battles made a much better impression on me than the suggested starting decks in quick play.

There's something about Burning Rome that reminds me of one of John Clowdus' designs through Small Box Games. There's some really cool, outside the box ideas here as well as some more uneven ones. I really like the rank and file system, where you can only play up to three cards in a column and have to cover up and forfeit the ability text on all cards but the one most recently played. The satisfaction of building combos and the low barrier to entry give the game an appeal that goes well beyond that of the average historical game.

Yet the pacing of the game seems backwards. The excitement in the early turns give way to a fairly immutable conclusion. Of course, you can't overlook the value of the playtime. In a game that only lasts 15 minutes or so, how much do you want to hold 2 minutes against the game if they're lacking? It's unfortunate that it has the issues it has, but there's still quite a bit to enjoy here. I hope Emil Larson keeps developing this system. I hope he tackles other areas history, as I would absolutely LOVE a feudal Japan version. As it stands, the game has a strong foundation but desperately needs some room for a few surprises in the later half.

I keep wishing there was a morale mechanic. Something to force units to flee, perhaps units that are in a column with the general getting a better morale rating. There’s so much to enjoy in such a small amount of time and in such a small footprint, I genuinely want to see the system improve. I’ve played it a couple times after writing this and I just keep saying, “It’s a shame this game plays itself towards the end.”
Read More...