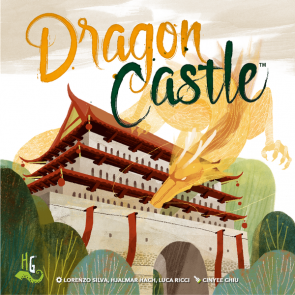 The gamers paw among the pile of games, deciding what to play. There is too much choice: talk drifts, pasta eaten and washed down with beer and cider. In the background, leather cracks sharply on willow as the TV displays the day's cricket highlights. It's a compelling game: maybe we won't play anything at all.

"What's this," someone says, holding up a box with a big dragon on the cover.

"It's based on Mahjong," I reply

"Oh. Alice likes Mahjong. Alice, shall we play this?"

So I have to explain that it uses Mahjong tiles but it isn't really like Mahjong at all. It's called Dragon Castle. Sure, it's got the same rule of finding pairs of free tiles to take off the stack, but that's not the game here. The game is arranging them on your little play mat, trying to make high scoring patterns. You can get points either for completing a big group of the same suit or for building tiles atop each other and putting shrines on the summits.

Alice is still interested, so we play. Many hands make light work of building the tile stack, but I'm not looking forward to this. The rules are easy enough, but they seem to mark this as a tiresome geospatial abstract of the worst kind.

The initial pair of tiles gets taken and round we go. On my first turn, I grab the first pair I spot. On my second, I'm more careful.  After all, it obviously pays not to collect what other people are collecting. And to collect what there's plenty of on the pile. The green bamboo suit looks a likely bet for both, so that's what I start to snaffle.

At first, we're all going for big patterns. And then another plank of strategy becomes obvious. If someone's about to make a big score, thieve the tiles they want from under them. I grab two swords, eliciting a howl of outrage from the player on my right. It sounds good. Perhaps this game is going to turn out better than it read.

Now, though, I have to find room for the swords on my tiny play mat without interfering in the bamboo group I'm trying to build. There's space enough, but you can only build high for shrine points by using already-scored sets. I have a nasty feeling that nascent sword group is going to be a sharp customer, stopping me making the most of my shrines. Or is it? My head begins to gently spin.

As the gamers greedily suck tiles off the stack it begins to shrink and the possibilities begin to narrow. I start to watch it like a miser watching a pile of money, thrumming with anxiety in case someone else sees and takes tiles that I want. Of course, this happens all the time to loud complaint and yells of indignation.

At one point we're all waiting for a player to snatch the last remaining dragon tile to deny the next in line, who desperately needs it to finish a pattern. Without it, they'll have wasted all the actions spent making that group. And it doesn't happen: to absolute disbelief they take something they need instead. Recriminations begin as the dragon player smugly snatches their prize.

"But I didn't want a dragon," exclaims the guilty party. "It's no use to me. I needed a season." And you have to admit, it's hard to argue. Which is more important: increasing your points or decreasing someone else's? It's all part of the pattern. Playing with two, it seems, would be at once more strategic and more brutal.

Turns out that leaving the dragon was the wrong call, as it added into a handsome total of victory points for a win. There is silence. "Shall we play again?" the victor asks, hesitantly. Our first game took three-quarters of an hour. Yes. We will.

This time we add in some of the optional cards. Two, in fact. A dragon card adds a special scoring opportunity, available to all players. Ours is that face-up dragon tiles next to shrines score a point. Then there's a spirit card which gives a special move, available to all players. This one lets us take adjacent tiles, even if the second is not "available": that is, has a free edge.

And so it begins again. It's clear, now that there's actually a very simple optimisation puzzle at the heart of this. You can take two matching tiles with the chance of scoring from a big group. Or you can take a single tile and a shrine, make smaller groups, build them high and score with shrines. The question is, of course, which is best at any given point in the game?

I try to solve this conundrum by starting a plethora of patterns and overlaying one on top of the other. As the game progresses, amidst an unexpected amount of shouting and swearing for such an analytical task, this turns out to be a bad idea. It's the worst of all worlds. I come a pathetic last. "Shall we play again?" You bet your arse we bloody well will. No-one dissents, drawn in by the magic of another castle.

Cards get dealt again for a new set of parameters. Now, we can score groups of three tiles instead of the usual minimum of four. We also score bonus points for face-up dragon, season and wind tiles, providing they're unique. This pushes the balance in favour of small groups, big towers and lots of shrines. So we set to. But I think I've spotted a flaw in the groupthink. Sure you want towers and shrines and face-up singles. But at game start, when there's still plenty of choices, it makes sense to go for one or two big groups for the extra points.

My analysis turns out to be correct: I take the game by a whisker from the bewhiskered previous victor. It feels like winning a sprint at the tape, something hard-earned, something to savour. "Shall we play again?" comes the question. Not tonight, actually, Josephine. But I can't even remember the last time we played a brand new game three times in a row. And as I head out into the dark, box under an arm, I'm already dreaming of the next puzzle.

September 06, 2018
Rating
4.0
Dragon Castle
Optimising patterns of tiles on a tiny grid has no right to be this much fun. A light level of "who gets it first" interaction is the secret sauce.
MT
Matt Thrower #1 Reviewer 286 reviews

WadeMonnig replied the topic: #282520 01 Oct 2018 07:09
There is trash talking and then there is calling Josephine bewiskered. I'm kidding, still made me chuckle when I first read it.
Read More...