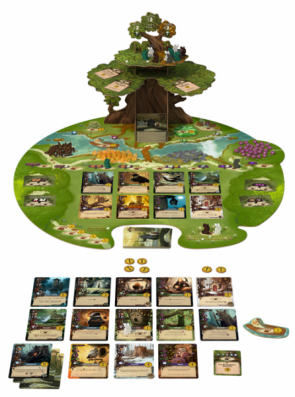 Without a doubt, the first thing you notice about Everdell is the giant tree. It's poised at the edge of a circular forest board, topped with adorable wooden forest animals and a few cards propped up in the leaves. The other game pieces are artfully arranged around the trunk of the tree and everything looks like a classic children's book come to life. You may not know what Everdell is about, but you know you want to play it.

Everdell takes you on a journey through the four seasons. Starting in winter, your workers are few and resources slim. The worker placement portion of the game is standard. Place one of your animeeples on a space and do the action. There's nothing new, different, or even all that exciting about this option for your turn. Really, you're doing it as a means to an end. You need to get Critters and Constructions out in front of you to build a glorious forest city.

Though it may not seem like it during your first few turns, playing cards will become the bulk of what you do in the game. Rather than placing a worker, you can build Constructions or recruit Critters. These cards can come from your hand or the meadow on the center of the board. This array of eight cards acts like a shared hand among players, allowing anyone to build from it. Things can get nasty in the meadow fairly quickly as multiple players are trying to get their grubby paws on the same card. Having built a General Store, you may now be in a race to be the first to grab the Shopkeeper. You see, once a Construction is built, you can play its linked Critter for free. Forget collecting berries to pay for that furball; your time is better spent finding ways to chain together cards. That is, of course, if you have the right combinations. When things line up, chaining Constructions and Critters makes for a delightful string of turns. However, when the cards in your hand and/or meadow don't work, there's little you can do. Actions are tight and resources even tighter.

Eventually, you'll run out of things to do on your turn and you'll have to prepare for the next season. You'll retrieve your placed workers and gain new ones from the boughs of that tree that you're now realizing is more form over function. Oddly, not everyone progresses into the next season at the same time; players can be in different seasons. Breaking the space-time continuum this way means that everyone is playing at a different pace. Stretching out your season as long as possible is typically the goal, so you can't help but wonder if you did something wrong when you're in autumn and someone else is still in spring. It can be worth moving into the next season so you have a little more to work with (thanks to production buildings), but it's hard to shake the nagging feeling that you're behind. Still, just because you can play a card doesn't mean you should.

With only 15 slots available for Constructions and Critters, you have to choose wisely as to what gets played and what goes into the dumpster. You can also discard cards for resources or points, but that's more of a last resort. While the future is teeming with possibilities in winter, the foolishness of youth will catch up to you in autumn when you have one space remaining in your city. Suddenly, it starts to make sense as to why some cards would have you trash Constructions or Critters from in front of you. It's too late though; you're almost out of workers and you play whatever card you can for the most points.

While the majority of your points will come from the combinations of cards in your city, events (i.e., goals) provide a few extra bonuses. Basic events are in every game and simply reward you for building a certain number of card types in front of you (e.g., three production cards). There are also special events, tucked into the second level of tree, often obscured from sight. These require certain Critter/Construction combinations that can often be more trouble than they're worth. Something like having to get the Doctor and Postal Pigeon to get 3 points for each husband/wife pair in every city takes as much work as it does luck. Many of the events feel similarly, making it easy to ignore them in most games. Besides, the points swing from them is usually nominal.

There's no denying that Everdell's looks are its best feature. These aesthetics are supported by mechanics that are easy to slide into, even if there are a few bumps under the surface. I'm not sure how well the polish will last into winter, but for now, I'm fine with a summer romp.

To me, that 3-d cardholder tree and the elaborate playmat mostly telegraphed "overproduced Kickstarter game." I like the idea of the seasonal pacing but aside from that... I'm not sure I'd play this over something with more editing like San Juan or core RftG. Seems like anthropomorphic animal games are in the boardgame Zeitgeist, though.
Read More...