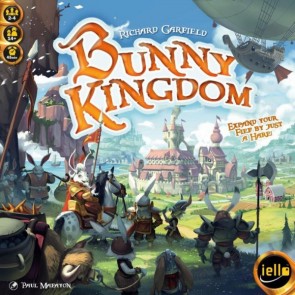 Don't let the cuteness fool you.

I've lived with rabbits for some time now. They're certainly cute, often sweet and have more personality than you'd expect, but they're also rather deceptive. They'll seem content to just sit there being adorable, but look away for mere seconds and you'll find that they've hopped behind your entertainment center and chewed through a cable for your video game console and they'll just look at you with an expression that seems to say, "Oh, I'm sorry, did you want that?" Bunny Kingdom, designed by Magic: The Gathering creator Richard Garfield and published by Iello, doesn't have as much of a destructive streak, but it is deceiving. What looks be a children's game about rabbits building medieval settlements is actually a very smart card drafting and area control game that's much more of an all-ages affair than you'd expect. It's cute, but there's actually a really solid game in here, too.

The board is broken down into a Battleship-style grid marked by X/Y coordinates. Players are trying to make fiefs, connected spaces in the grid, as well as build cities and have a variety of resources in their fiefs. At the end of each round you'll score the level of cities times the number of different resources in each of your fiefs. That may sound dry but the card drafting and how the game builds as it progresses outshines the math-laden scoring system.

In each of Bunny Kingdom's four rounds, players draft two cards at a time, reveal them simultaneously and resolve them before passing their hand to the next player. You could be claiming a territory on the board, constructing a building, or taking cards that remain secret until the end of the game to give your score an unexpected boost. The earlier half of the round has plenty of tough decisions, not just about what you want to play but what you don't want the next person in line to have. The simultaneous resolution keeps the game moving right along which pairs great with the eager anticipation of seeing what's in the cards you're getting. The only time the game really slows down is at the end of the round, where you have to count up your score, sometimes requiring a second count just to make sure you got everything. The newer copies of the game have a bigger board than the earlier print run, and I can't fathom playing on the smaller board. It can be easy to miss smaller isolated sections you control as it is, playing on a smaller board must have been a nightmare.

Drafting games have been popular for several years now, but where Bunny Kingdom has an advantage over something like Blood Rage is in how open the cards are. Aside from some of the end game scoring cards, there aren't any specific, detailed powers. Where experienced players in Blood Rage or 7 Wonders know that there are certain cards that should absolutely be grabbed no matter what path to victory they're pursuing, Bunny Kingdom lets you stay a bit more focused on how you want to play. The only cards someone should be sure to grab are the level 3 cities, of which there are only three and are not guaranteed to show up at all. You can hate draft if you want, but if you're playing well enough, not doing so isn't going to necessarily lose you the game. All of this makes Bunny Kingdom a much more approachable, accessible and ultimately replayable game.

The most interesting aspect of Bunny Kingdom is how it unfolds as it goes on. Even after several plays, everything seems so impossible on the first turn. You'll end the round with only a few small areas of your own, possibly only scoring a point or two. Never mind how you're ever going to connect to the surrounding territories, how are you going to make anything that scores big points out of it? And yet it happens. You find those connections, you grab more resources and build bigger cities and those one or two points on the first turn become twenty. You watch the board fill up with those cute plastic bunnies and there's a genuine feeling of accomplishment as your fiefs grow.

It's worth noting that Bunny Kingdom is somewhat unusual when taken as a family game. If a game like Survive is a family game that's found an audience with hobby gamers, Bunny Kingdom is sort of the opposite. This is a hobby game, make no mistake about it, but its accessibility and cute illustrations open it up to an audience that might pass it by if it were another example of the quite tired fantasy/Cthulhu/zombie settings that tend to characterize hobby designs. By the same measure, gamers shouldn't let the window dressing turn them away, especially fans of drafting games, as Bunny Kingdom really is one of the best in the genre.

WadeMonnig replied the topic: #281806 18 Sep 2018 02:32
Excellent review! Glad you have the new and improved board, it makes a world of difference. I'm glad Iello listened and put out the larger board.

engineer Al replied the topic: #281933 19 Sep 2018 21:51
Another excellent review, Josh. Man, we've been playing a good deal of great new games on THERE WILL BE: THURSDAY lately, but this one really needs to make it back to the table.
Read More...