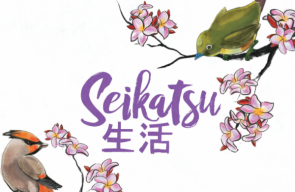 Zen and the Art of Flocking Birds

So, I think I might like abstract games. I've never been particularly drawn to abstracts; they always conjure up images of stark black and white games with no theme and a name where the vowels outnumber the consonants three to one. Without an interesting theme or some other sort of hook, there was simply nothing that made me want to seek them out. Seikatsu caught my eye because of the theme of birds and flowers which is beautifully illustrated on the box art. Equally enticing was the simple player turns: play a tile, score the tile, and draw a replacement.

Eye-catching art, a simple ruleset and it is made for 3 players. I'm not saying it plays well at three players, I am saying this game was MADE for three players. If you start a sentence with "I'm looking for a three player game..." More than likely my answer will be "Seikatsu." This is partially accomplished with a board layout. It is an overview of a traditional Japanese garden. It contains three pergolas that are color coded to each player. Your goal is to create the most beautiful view from your specific pergola.*insert collective Awwww, how cute* Each tile you place has both a species of bird on it and a type of flower. You get points (scored immediately) for each flock of birds you fashion and points for number of same species flowers you can assemble in a straight line of sight from your pergola (these are scored at the end of the game).

Sounds easy, right? "Like walking and chewing bubblegum" I think to myself. As my first game stretches before me, I get enticed by the scoring track. Slowly but steadily, I move further and further out into the lead, forming larger and larger flocks of birds. I draw a koi pond tile, which acts as a wild tile, allowing you to make it any bird you want (but just for that round). I hold onto it until I see my opening, slapping down the acrylic tile with more gusto that is strictly needed. I score the maximum for a flock of birds, 7 points, moving me around the bend of the scoring track. In what feels like a few more heartbeats, all the tiles are placed and the game is over...except for the scoring of the flowers. As the rows of the last place player are tallied up, I watch as my lead quickly diminishes, and then disappears. Line after line of identical flowers score more and more points. That gusto-filled wild koi tile is now used by one of my opponents to complete a line of six identical flowers raking in an astronomical 21 points. How did I not see that? Well, I was concentrating on birds but, more importantly, I wasn't thinking about the board from their perspective. In short, I chewed bubblegum and got my ass kicked.

We clear the board and start a new game. I've got this now "Like patting your head and rubbing your stomach." The game goes equally as quick but this time I focus on both creating flocks of birds while also lining up a beautiful flower view from my pergola. In truth, I probably over compensate toward flowers, remembering the endgame windfall they provided. Once again, I draw a koi tile and spend more than a few moments deciding exactly where it will give me both bird points and create an extended line of flowers. As the last tile is placed, I'm sitting in second place but I'm confident in my flower layout to bring in those final points. And they do, with me improving my score drastically over the first play...but again, I didn't view the game from the perspective of my opponents. My thoughtful Koi placement benefitted me but also scored just as many points for both of the other players. I ended up patting myself on the head and rubbing points directly to the others.

The next day we play a third game. "Okay," I grumble "Like trying to keep your eyes open when you sneeze" I place my tiles, draw new ones and spend a good percentage of the game with my head titled looking like a dog who has heard a high pitched whistle, trying to look at the board from the other perspectives. You can't hate draft tiles in Seikatsu since you are blind drawing from a bag but you can sure try to hate place those acrylic nature tiles. I'm pretty sure I composed a novel titled "Angry Arbor: Zen and the art of a bunch of flocking birds" during the opening rounds. About halfway through the game I look at the view from my perspective. It is an ugly mess but I have this pleasant sensation, not only am I having fun but I have the start of a bit of brain burn...from a play one, draw one game.

Every three player game of Seikatsu has been an amazing dance of birds, flowers and a tickling of brain burn. The two player version doesn't quite reach this peak, possibly because with only one opponent, it is possible to judge their strategy and play counter to it. The four player variant is the least desirable of the player counts. It places you on a team with another player who sits opposite of you and you only play from two of the three perspectives. Not knowing what tiles your teammate has available to them virtually eliminates strategic planning and, in the end, it just feels like a hobbled version of what the game truly is.

Seikatsu is that extraordinary game that is virtually perfect at three players. There are no concerns of teaming up or king making and the scoring system assures that everyone feels in the running until the final tally.
Tweet

ubarose wrote: Sounds cute. Next time I see it at game day I'll be more inclined to try it.

Make sure you play it as a three player game, I'm sure I stressed it enough in the review but that is the perfect player count.

KindFortress wrote: Thanks for the review! Definitely we designed it to be THE 3-player abstract. But I still love it at two also.

Seikatsu is my go-to game for 3 players. It's great at two but nothing matches it in my mind at three. It perfectly fills a void in my gaming library.