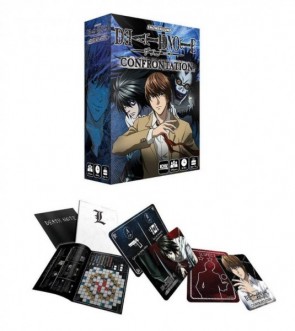 Fruit as a plot device?

Shonen Jump's Deathnote is a supernatural take on the classic trope of "Hunting the Hunter." The main characters are Kira, the owner of a cryptic notebook that will kill anyone whose name is written into it and L, the detective who is trying to track Kira down and stop him. A one-on -one game of cat and mouse is ripe breeding ground for a head-to-head two player game. Getting into your opponents head is definitely part of the fun. That is assuming that playing a mass murdering vigilante or the detective who serves up other murderer's as bait are the heads of someone you want to explore.

The goal of the person playing as Kira is to accumulate 15 points. Kira has decided that the best use of the notebook is to write the names of killers in it, in an attempt to cleanse the world of violent criminals. Three different types of murderers are present in Deathnote: Confrontation and have specific point values: Bombers are 3, Shooters are 2, and Stabbers are 1. Kira's first action is to draw a suspect card; this is person they will be playing throughout the game. His location is static and will remain so for the entire game. It is up to the second player, L, to narrow down the suspects to the one Kira is playing before they reach 15 kill...err...victory points.

The game starts with Chapter 1. This is essentially the basic version of the game and can be played repeatedly and will deliver a unique experience each time. Chapter 1 starts with the morning phase in which a card is flipped that shows two possible crime scenes, one is labeled A and one is labeled B and each scene is represented with one of the aforementioned Knife, Gun, Or Bomb Icons. Kira must decide which of the crime scenes to visit in order to kill the suspect and earn the assigned points. L must decide which crime scene he will call upon in order to stop Kira from making the kill. After each player selects the A or B side of their token, they reveal them simultaneously. If they match (A, A) or (B, B) then L arrives at the correct scene and deprives Kira of the kill. This not only denies Kira the points for the kill but allows L to eliminate one of the possible suspects Kira may be (by drawing a card from the Suspect deck). If the tokens do NOT match, Kira successfully makes the kill and earns the allotted 1,2, or 3 points. It is an extremely basic mechanism and one that provides a surprising bit of suspense and interaction between the players. One always assumes that Kira will pick the highest point value suspect. Unless, of course, he doesn't because he thinks L will pick it and block him. The "I know every move you are going to make before you make it" smack talk alone is priceless. Especially when you find out just how important this phase is for the detective.

The night phase is next and is where the true deduction kicks in. Kira is in a static location and has a 3x3 grid around him. This is his "local" area. Anything outside of this 3x3 is considered "regional." The player controlling L rolls three dice with the murder icons on them. The detective then picks three grid areas on the map with icons matching the dice they rolled (the maps and icons are identical for both Kira and L). These are the locations of murderers and L is leaking this information to lure Kira out to kill them. (Hey, it IS called Deathnote; you had to figure it was going to be a little dark). Kira then chooses one of those locations for his kill. However, Kira can only kill locally (within the 3x3 grid of his home base), which gives L vital information as to where he is located on the map and which suspect he might be. It was mentioned to me that, despite being a deduction game, it has much more in common with Battleship (using information to narrow down a location on a grid) than it does with something like Clue. And it does, EXCEPT (you knew there was going to be an EXCEPT, didn't you?) it is like Battleship if you could occasionally lie about your ship locations. That is because twice during the game, Kira can venture outside of his 3x3 local area and make a regional kill on the map that matches one of the icons rolled. That is when you find yourself in logic death spirals of "If Kira is going to do a regional kill, it's going to be a bomber because bomber's are worth 3 points but bombers are located on the edge of the city, so I can't eliminate those three suspects unless I'm confident is was a regional kill and not a local kill and..." and so on, and so forth, until your head explodes. Oh, and don't forget to factor in that if there is no targets available within the local area and Kira has used both of his regional kills that he must declare a "Quiet Night" where no one dies (hurray!) but if you have a total of three quiet nights, the trail goes cold and the Detective loses. I did mention your head exploding, right?

The two phases are repeated over and over until either Kira reaches 15 points or L guesses the suspect. If L guesses wrong, he instantly loses. It always feels like L is at a disadvantage with double importance riding on the morning phase. If L guesses correctly, not only does it deprive Kira of a kill (and thus points) but it also eliminates one suspect. A string of unsuccessful morning phases virtually dooms you as L. Even if you manage a 75% success rate of stopping Kira in the morning phase, being able to narrow down your suspects to a single one before Kira can reach 15 is a rare achievement. Maybe that 15 point threshold is the result of extensive playtesting because it does deliver an adrenaline boost because of the doubt and leaps of faith that are sometimes involved. It certainly makes that one time you unequivocally know who Kira is a dose of pure satisfaction.

Chapter 2 is essentially the same game except Kira must reach 20 kill points. Extra boosts/hints can be earned by bribing a Shinigami named Ryuk with apples. (*shrug* I don't know, Google "Speed Racer" and "Pineapple", The Japanese have something for Fruit as a plot device).

My biggest issue with Death Note: Confrontation is with the components. The card stock feels cheap, just picking up the cards made me want to immediately sleeve them. The Kira and L books only contain 12 Chapter one maps and 12 Chapter two maps. IDW has promised they will have PDF's of the maps available for download but I personally will be laminating some maps from the books and using dry erase markers and then hoping like hell I can fit it all back in the box. It is never a good sign when your first reaction to unboxing a game is "I need to fix this."

For a game that pits the mind of a vigilante against a mind of a detective, it is a little too reliant on the way the dice roll and the 50/50 token revelation. ..Or at least that is what I tell myself when I lose. But it is a great game of moments, like identifying Kira when he has 14 points or declaring it is the third quiet night to L, knowing you have slipped away as the case goes cold.

Thank you for the review.

bendgar wrote: Is this a reviewer of extension cords? I can't tell his board game credentials from that selfie! Outrage!!!

Thank you for the review.

Ha! I was asked to send in a selfie and I sent in this pic because I thought it was hilarious. m.facebook.com/story.php?story_fbid=2116...0&id=100000062217175
It was edited to make it clear who I was. And as you can tell from the COD shirt, I have zero cred on the video game and board game front.

Sevej wrote: Quite thematic (including the apple), and yeah, the source material is quite dark.

Yes, the Apple is thematic. I've watched the anime (first season) and the not too horrible live action Netflix movie. I just couldn't resist the speed racer pineapple reference because it stuck in my head as a youth.
Read More...