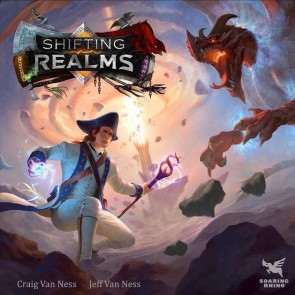 The Realms, they are a-shiftin'.

I don't really like to start of a review by introducing another game by another designer, but when we are talking about Shifting Realms it's appropriate. Back when Donald X. Vaccarrino released Dominion, the hoopla was that he was taking the deckbuilding process from CCGs and turning it into a fully realized game unto itself. This is true. But arguably, the more interesting and I think lesser explored innovation of that game was a high degree of modularity wherein each instance of the game is assembled from a system of interlocking component sets - in this case, the cards chosen for the marketplace. He returned to this concept a few times, most notably in Kingdom Builder, and I think it's a pretty neat format that creates a mutable, exploratory gaming experience.

Now, let's get back to Shifting Realms. This is a title designed by Craig Van Ness and his brother Jeff, published by Soaring Rhino Games. Long time game players will recognize Mr. Van Ness as one of the folks that brought us Star Wars: The Queen's Gambit and of course Heroscape. It's a simple- almost humble- design that I don't think is going to set the gaming world on fire or anything like that, but it's a very fun to play game that has a modular format like a Donald X game. But this time, what you do in setup is to pick three realms out of five available- hence the title- and those three boards along with their specific buildings, goals, resources, and other gameplay elements make up your game.

Fundamentally, it's a simple dudes on map game with some resource management. It's pretty standard stuff, really. You do three actions per turn. You recruit scouts and soldiers to move around and take over squares the generate materials and sometimes fight with a basic 1:1 deterministic combat system. You can use the piles of resources you've accrued to build structures, which match up with each different realms, must be built on certain types of board spaces, and provide benefits for as long as you control them. You can also draw realm-specific Story cards, which are a fairly basic assortment of action cards that have immediate or permanent advantages. It's a most VP thing that ends either all the structures in all three realms are built or two out of the three realm objectives have been met.

Mechanically, there is a meat-and-potatoes sensibility about this design. It ain't fancy. There really isn't anything clever or novel going on in it in terms of process or player engagement, and the setting(s) are really pretty vanilla. There's an Elf realm, an Orc realm, a Dwarf realm, and so forth. The framing story is really pretty strained in terms of identifying who the players are ("Keepers" charged with repairing the temporal fabric, et cetera). The graphic design is ho-hum with some terribly uninspired visual choices that make the game look a little homely.

I find the humility of this game oddly refreshing. It's not trying to reinvent the way we play games, it's not trying to be the jump-off point for an entirely new fantasy setting, it's not bending over backward to be on trend in terms of subject matter or gameplay concepts. It's just a simple, fun game with a neat format. Even though the presentation is ho-hum, what makes the game fun to play is the way that each realm has its own set of parameters.
For example, in the Pirate realm, you can build a pirate ship and send your units out to raid. Or you can find buried treasure there. In the Orc realm, they are fighting to overthrow a Troll King that has enslaved them so that becomes the end-game goal there. The Elves are building up a peaceful empire of castles and markets. While over in the Dwarf realm, they are building tunnels to scurry around under the watchful eye of a dragon. And the Priests are hard at work enslaving followers to gather stone to build their temples.

However, I can't help but feel that this concept doesn't quite go far enough in terms of how these realms interconnect. Even though you can move between realms as they are geographically next to each other it seems and although things you do in one realm (such as gathering resources or gaining Story cards) can impact what goes on in another, there isn't much of a sense of combinatory codependency or particularly intricate interactions. It can feel a little siloed, almost if you were playing three concurrent games. Which is kind of neat, actually, but I think I'd like to see more of a meshwork of elements playing off each other.

And it could very well be that earlier versions or drafts of this game had more complexity like that and the decision was made to angle the design toward a more accessible, simpler sort of gameplay. I think that this was the right choice because these days I very much appreciate a game I can put out, explain quickly, get right into, and get out of in an hour and still feel like I've had a robust, engaging experience. Shifting Realms accomplishes this and I am eager to see what the Van Ness boys come up with next. There's a lot of potential in this design for expansion, and I hope that future "Realm Engine" titles or additions explore some more compelling ways that these modules can create unique gameplay situations and puzzles.

A copy of this game was kindly provided by Soaring Rhino for review. ThereWillBe.Games does not accept any payment for reviews or other content.

jvanness replied the topic: #282440 28 Sep 2018 10:12
Thank you for the review. The following bit from the review captures our design goal perfectly. The expansion coming in March adds more complexity and includes two realms that were designed concurrently with the original 5. The 5 we chose to put in the base game did reflect a desire for accessibility.

"And it could very well be that earlier versions or drafts of this game had more complexity like that and the decision was made to angle the design toward a more accessible, simpler sort of gameplay. I think that this was the right choice because these days I very much appreciate a game I can put out, explain quickly, get right into, and get out of in an hour and still feel like I've had a robust, engaging experience."

Michael Barnes replied the topic: #282472 29 Sep 2018 09:53
Thanks so much for stopping by and commenting Jeff! Definitely looking forward to the new realms- I think a really strong, transformative expansion could push your game into the “great” category. There is a lot to be said for saving the advanced stuff for an expansion, for sure.

MacDirk Diggler replied the topic: #282487 29 Sep 2018 14:21
I haven’t been buying many games lately. But this seems to be right I’m my wheelhouse. My biggest problem wiith getting heavier weight games on the table is my laziness and lack of memory. I have a few wiling friends, but taking the game out and relearn it so I can teach it to them and have a decent session is something I have been dreading as of late. Thanks for the review Michael.
Read More...