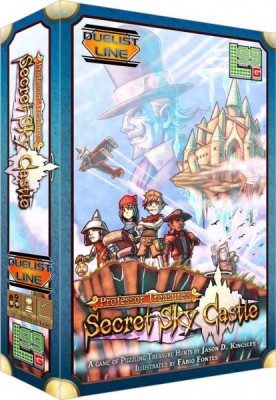 We would like to welcome the latest graduate from the Dr. Evil school of evil naming...

It seems that Professor Treasure, despite (or maybe because of) his name, has pilfered all of the world's treasure. Apparently, Sky Castles are the tax havens of this planet and has decided to deposit all of his ill-gotten gains into one of these flying fortresses. He has protected his horde with traps, magic, things with big, gnarly teeth….no, no, wait, turns out he just put it in the castle and left it. But he did manage to lock a few things in some fine, quality treasure chests …and then left all the keys lying around the secret sky castle.

You take the role of the lead explorer in an expedition to relieve the Professor of his fortune. This must be a union job because you bring along a cast of characters that sound like a British ensemble picture vying for an Oscar: scout, lookout, sentry, captain, jeweler, smuggler, explorer, and thief. Each character has their own specific powers to help you properly release the fine professor of the burden of wealth. And, lo and behold, when you arrive at the Sky Castle, it turns out ANOTHER expedition has shown up as well. (I’m beginning to think that “Secret” Sky Castle might be a misnomer).This pits you against the other player in a head-to-head battle that is part puzzle, part programming and all Take That. The ever changing map of the castle is created every round by placing tiles to form a grid. The twelve tiles include Keys, Treasure Chests and Artifacts. The players then shuffle their eight character cards and, in its first bow to randomization, you place two of them aside as you will not be allowed to use them this round. This means that sometimes the Sentry card, which can be used to protect a treasure or item from being swapped or stolen won’t be available some rounds and, in the same way, the Thief card that allows you to steal a tile might be available. In its second curtsy to randomness, the players then separate the six cards with the first player setting up groups of 2-2-2 and the second player into 3-3. This is where the programming aspect comes in. Some cards synergize extremely well and some cards benefit from being played later in the “Role Round” as they are reactionary. Once you have decided what order you want to play the cards, the first player plays two role cards, then the second player plays three, the first player goes again with two, the second player plays his last three cards and the first player end with his final two cards. This means that the players mess with each other’s carefully laid plans in a delightfully evil way.

Then the actual treasure hunting phase begins. Each card has a number on the top left which tells you when it will activate. This means another batch of plan busting shenanigans is unleashed as each of the cards power activates. Treasures you wanted can be swiped, swapped or simply taken before you can execute your move. Keys that you pick up are used to unlock treasure chests (each chest needs a specific number of keys) and the keys “refresh” to be used again in subsequent rounds. If you don’t have enough keys to unlock a treasure chest you want to take, there is an endless supply of skeleton keys you can use. However, each skeleton key that you take will give you ever increasing negative points at the end of the game. After all the roles have activated, you replace the taken treasures with new tiles and begin the second of the three rounds.

The rules are on one sheet that folds out into a poster of instructions. The rules are simple enough that you won’t be digging it out for reference and I, for one, appreciate the large print and good sized explanations. Still, I could see it bugging some players. Even with its relatively easy rule set, you can approach each session using different tactics. Both Role execution and treasure collection has enough leeway that it keeps it from getting stale quickly. It is a good mix of laying out your own plans while making sure you mitigate the other player from dominating one aspect of the treasure. The Artifact treasures, with the ever increasing point values that are dependent on how many you have collected, always seem to entice players at the cost of everything else. It is up to the players make sure their plan includes a bit of “Hate” artifact hunting to keep everything in check.

Clocking in at 20ish minutes, Professor Treasure falls distinctly into the filler category. But it is very engaging, as the burnt pizza can attest when I and my wife decided to slide in a quick game before dinner one night. It’s a quality game with quality components that should keep your treasure gathering instincts sated. Well, until Professor Treasure starts a GoFundMe to lease some dragons or hire some proper guards.