Masque of the Red Death Board Game Review 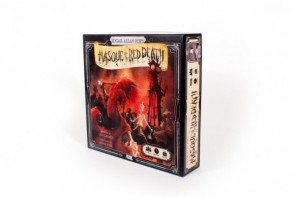 The Masquerade is about to begin. All the attendants sneak glances at the time, awaiting the arrival of Prince Prospero. As the clock strikes 8:00, the prince arrives, draped in his regal attire and everyone jostles for position, pressing close to his majesty. A witty quip and a subtle flirt bring a smile and a chuckle from the Prince. As he slowly moves away, the socialites plan how they can next meet with him, preferably alone, in hopes of currying his favor.

A glance at the clock shows it is 8:30…*booming disembodied voice* Aww, hell, the clock hand has fallen victim to gravity again. What time is it supposed to be? 8:10? Ok, put it back to 8:10 and don’t bump the table.” “I swear I didn’t touch the table! What room does he go to next? The bicycle room?” “Dude, that’s not a bicycle, its spectacles”

Welcome to the board game version of Edgar Allen Poe’s Masque of the Red Death. You begin the game by taking on the role of one of the detestable socialites who has barricaded themselves inside an abbey as the rest of the world crumbles at the hands of a deadly plague. Hmm, maybe I’m being too harsh? No, looks like all the characters are named after the seven deadly sins; I think I’m pretty safe with that description. The game takes place on the night that Prince Prospero is throwing a masked ball of the most unusual magnificence. It is up to you to gain favor points with the prince during the event but *1842 spoiler alert* at the stroke of midnight, red death incarnate arrives and it would probably be for the best if you could avoid that particular introduction.

The balancing act of improving your social standing with also staying on this mortal coil is done via card selection and then the simultaneous revealing of selected cards. The cards generally fall into two categories: Either gaining you social favor or giving you information on where the Red Death will or won’t be at a specific time interval after the stroke of midnight. Using the data you gather, you program your movements behind your player screen for how you plan to move once the witching hour arrives.The simultaneous revealing of cards and the synchronized movement phase means that the rounds of the Masquerade move at a brisk pace once you have learned the order of play. As I joked about in the opening of this review, the Clock included in the game to keep track of time is virtually useless, as the clock hands constantly move and, usually end up pointing down at 6. Honestly, while as aesthetically pleasing it is to watch the countdown to death on the clock, it is not remotely required for the game. The Prince’s side board does the exact same thing and you need to use it for his movement anyway. The masquerade portion of the game is simultaneously too long and too short. It is too long in that toward the end of the phase, I found myself checking how many rounds were left, not out of fear of the Red Death but out of the desire for the card playing to end. It is too short in that, even with the super powered “Personality” cards that every player gets, it is virtually impossible to gather enough information to assure your survival. This leads to the biggest problem with Masque of the Red Death: It lacks satisfaction. With luck playing such a major factor in winning the game, you never feel like you have improved after repeated plays. You just feel like you had either bad luck or good luck. Luck is a part of any game, be it dice based or another mechanism. Masque of the Red Death’s luck just sticks out more because it is back loaded at the end of the game, when everything is on the line.

Masque of the Red Death definitely values style over functionality. The art style dominates the entire release and I’m an unabashed fan of its twisted elegance. However, it has a negative impact on the gameplay. The flavor text on the action cards is a chore to read. Sure, the symbols that show what actions you will take are the important part but when playing each one for the first time, and trying to set the appropriate mood, squinting and trying to get the proper lighting to read them kills the moment. Each room of the board has both a color and an Icon. But colors can be hard to distinguish from each other and trying to pick out if a clue is for the blue room or the purple room can be difficult. The cards also feature the room’s icon but the icons are blended into each area of the board so they don’t jump directly out at you, which is great from an aesthetics point but awful from a gameplay view.

This may sound like I’m damning the game with faint praise and I guess I am but one of the things I really like about the game is that it supports four to seven players. Being able to add players beyond what is normally considered a comfortable amount because of the simultaneous gameplay makes a huge difference. It is easy enough for casual gamers and it is great for social situations where spitting into two groups and playing separate games isn’t optimal.The frantic scrambling from room to room being stalked by the Red Death is an exhilarating way to end the game. If you make it out alive, consider yourself lucky. Or consider yourself smart. Or, as you stare down at your opponents extremely popular, but no less dead, corpse, realize it’s a decent mixture of both.

Well that gives me something to think about this morning.

Really an interesting subject matter for a game, and I don't mean that in a good way. Though I appreciate that Horror has been a mainstay in the industry, this particular Poe title isn't as much about horror as it is social commentary, where the horror is more about how the people in the story are behaving than how it ends. Anyone who has read so much as one Poe poem prior to this (or, frankly, has heard of him) knows how the story is going to end.

Interesting choice for review, and well delivered for a game that really appears to be a mixed bag.

Sagrilarus wrote: "Masque of the Red Death’s luck just sticks out more because it is back loaded at the end of the game, when everything is on the line."

Well that gives me something to think about this morning.

Really an interesting subject matter for a game, and I don't mean that in a good way. Though I appreciate that Horror has been a mainstay in the industry, this particular Poe title isn't as much about horror as it is social commentary, where the horror is more about how the people in the story are behaving than how it ends. Anyone who has read so much as one Poe poem prior to this (or, frankly, has heard of him) knows how the story is going to end.

Interesting choice for review, and well delivered for a game that really appears to be a mixed bag.

I have no insight whatsoever on the actual making of the game but I would suspect it went something like "Hmmm, this is in Public Domain, it has name recognition. Let's try to build around that." As you said, it's an interesting choice for a theme. It requires a "bit" of suspension of belief. They recommend reading the (included) short story before beginning, so you KNOW what is coming but you are still going to try to butter up the Prince to gain favor? I pretty safe in assuming that any sane person would be gathering intel to try to save their self. I just went with "We've heard rumors of death arriving, isn't that a load of poppycock? We heard he will be in the library at 12:20m, isn't that crazy? Hahaha."
Read More...