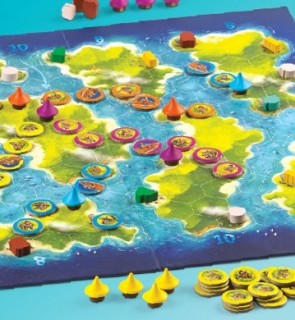 This week I'm looking at two of Blue Orange Games' latest from Reiner Knizia and the Bruno Cathala/Ludovic Maublanc team.

When a great, influential artist enters the later stages of their career, there is always a tendency to try to connect their most recent work with whatever the last, most successful thing was that they did. This is what I call the Scary Monsters effect, referencing how every David Bowie record from Outside up to Blackstar was hailed as "his best since Scary Monsters". We have an innate desire to want our beloved creators to get back to what they do best, to return to their golden years. With this in mind, Reiner Kniza - the greatest living game designer- has done "his best since Scary Monsters", and that is Blue Lagoon.

With a wonderfully colorful South Pacific setting that looks more than a little inspired by Disney's Moana, this is "classical" Knizia design in every way. It is an iterative design, meaning that you can draw clear lines from concepts the great man has explored in previous work. Indeed, long-time Knizia acolytes will likely reference Through the Desert and Amun-Re in particular and the assortment of mechanisms employed represent a number of traditional Eurogames motifs- set collection, route building, and area control in particular. With only a couple of pages of rules and a high degree of abstraction, it feels both atavistic and nostalgic in ways that anyone who was playing the "German games" of the 1990s and early 2000s will find welcoming.

The idea is that you are the leader of a tribe settling an archipelago by placing a single piece per turn. You can either place a double-sided Settler, which allows for placement on land or water, or a Village. Waterborne Settlers can be placed anywhere, but on the islands they must be contiguous. There are also four different resources that may be claimed and eight staues. All of this feels very much like one of Knizia's classic tile-laying games with maybe even a touch of his more obscure Africa.

But where it gets really interesting is in how the game is bifurcated, like Amun-Re, into two distinct stages with only some elements of the first stage carrying over into the second. Once all of the resources on the board have been gathered or someone runs out of Settlers, the Exploration phase ends and there's a scoring - you get points for having the most Settlers on each of the islands, for linking islands, and for having settlers on 7 or 8 of the islands. There is also a set collection bonus for having matching sets of resources. Once the interim scores are settled, the game enters the Settlement phase- with everything on the board being reset except for the Villages you've placed previously. The Settlement phase then plays out but with a different trajectory as board positions are already fixed and you are working to expand rather than establish. It ends with a final scoring, and the game can be expected to take 45 minutes or so to finish.

I love this game because it feels so thoroughly Knizian. It's a great reminder of why his games are so good- it is an intensely focused design completely bereft of the baggage and klunk that too many modern games are saddled with in their desperate scrambling to convey "theme" or convince players of their depth. This is a game where you play one piece a turn, but that one play can bear multiple meanings. You can play aggressively, to block and deny. Or you can play opportunistically, looking for areas of the board to quietly dominate while others are busy shoring up majorities or links elsewhere. Another player may pursue a resource strategy, attempting to hit the exponential bonuses by grabbing as many of these pieces as they can. The themes are fixed in the game's stages- there is settling, with the boats coming ashore and tribesmen and tribeswomen staking out land to establish permanent developments, and then then the creation and consolidation of territories once villages are built.

Like all of Knizia's best, this is a game that offers more than it may appear in terms of these themes and its multifaceted, player-driven gameplay. It's also a very accessible game, like all of Blue Orange's best. This is a great family game, in fact one of the best games in this class for 2018. Knizia is back, and I'm looking forward to what the good doctor has in store for us next.

Blue Orange and Bruno Cathala hit Spiel des Jahres paydirt last year with Kingdomino, a brilliant family game that is as the title suggests, really kind of just dominoes with a kingdom-building overlay. I think it's smart, fun design that succeeds primarily because it takes some very familiar, traditional gameplay concepts and very gently nudges them towards more contemporary game design. For 2018, Blue Orange and Mssr. Cathala have teamed up again, with Ludovic Maublanc on board, for Scarabya, another family-friendly title that kind-of-sort-of does what Kingdomino does but with somewhat less success.

The familiarity in this design is chiefly in the simplistic, tile-laying puzzle design which uses Tetris-style polyominoes and a game flow that will remind many players of Bingo. A light dusting of setting is applied over the top that is reminiscent of Lost Cities, with the concept being that players are archeologists tasked with recovering golden scarabs from four different parts of the world. Each player gets an individual board with a different setting but all get a set of the 12 polyominoes.

There are 12 turns, each marked by flipping over a Mission Card that shows one of the pieces. Each player places that piece on their grid, with the goal of roping off "excavation area" of four or less squares. Every scarab in an excavation area scores based on the number of squares in the Excavation Area- so 1-4 points. This is very reminiscent of the crown scoring in Kingdomino. Once all of the Mission Cards have been drawn, it's over. High score wins, and you've invested maybe 20 minutes into it, tops.

The basic gameplay is breezy and mildly enjoyable, but it lacks drama, tension or surprise. It's true that you might find yourself shrugging over a piece you can't play or momentarily struggling to figure out where to place one, but it's mostly a minor, low-stakes kind of angst. There is zero friction, and even coming out on top at the end is more of a "huh" moment then a "hey, I won" moment. Due to a rule I suggest you throw out that states that all players must set up their boards in the same way, it's entirely possible for all players to play the exact same game and get the exact same score if they were to place their pieces in the same way- not a good look if everyone is able to figure out the most valuable plays. Mixing the setups around results in a better game, but may introduce some imbalance between the availability of the Scarabs and the order the Mission Cards come up.

This is a decent family game and its ease of play should not be undervalued- nor should its appealing, colorful presentation and inexpensive price point. Anyone can play and enjoy this, and it makes for a good option for younger kids who may be playing without guidance. But it lacks compelling decisions for more experienced players and it's hard to recommend it as an alternative to the superior Kingdomino.

Review copies of these games were supplied by Blue Orange Games. ThereWillBe.Games does not accept payment or compensation for editorial content provided.

Sagrilarus replied the topic: #285568 08 Nov 2018 07:20
I just had this recommended to me Tuesday night by another old gamer. He said the same thing you did -- Knizia's best since Scary Monsters. No really, he said Knizia's best in years. Recommended I buy it and I likely will for Christmas now that I have two recommendations for it.

Mr. White replied the topic: #285580 08 Nov 2018 08:56
This is perfect timing. I had recently considered refreshing our meager family boardgame shelf. Blue Lagoon and Kingdomino sound like two titles to pick up for the Holidays.
Read More...