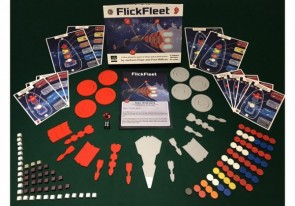 Game Name
FlickFleet
Publisher
Eurydice Games
There Will Be Games

An observer would have seen nothing but a brief blur around the ship, but the Uprising Destroyer "Resistance" had gone to battle stations. Shields up, the captain then gave orders to activate the defence grid ready for firing. Everything seemed to be going fine until the Resistance fired engines to manoeuvre into position. It slid across space, spinning wildly, before coming to rest in the opposite direction.

"What the hell is going on?" thundered the captain as a huge red dice smashed into the ship, blowing it to smithereens.

Destroyers are fragile, you see. They can put out of a lot of firepower, but if they're hit with a roll of four with shields down, they're instantly destroyed. And along with the Resistance, so went my suspension of disbelief.

Still, it was quite a thing while it lasted. A well-themed dexterity game is an engrossing thing. You're not just thinking about how to win. You're leaning in, touching it, being a physical part of proceedings in a very intense way. And FlickFleet is better themed than most. The ships are acrylic cutouts, with the biggest, the Dreadnought, having a hulking table presence despite its flatness.

I had my doubts how well acrylic would slide, but it works fine on both wood and stone. But because they're not a regular shape, the smaller ships don't always flick correctly. When I first flicked the Resistance, it pivoted on its head, doing a mid-flight u-turn. At first, this was frustrating, then it became a learned skill. The chance of it still happening on any given flick then became a part of the game's charm.

I explain all this to my daughter as we set up the introductory scenario. Kids don't listen to advice and her first destroyer flip skids and pivots in exactly the same way. She stares at it in disbelief, then starts to giggle.

We end up giggling a lot, playing FlickFleet.

Spinning Destroyers are not the only hazard. Facing the wrong way isn't a massive problem because you can fire in any direction. It's just a matter of putting a dice, normally a ten-sided one, on top of the ship and flicking. But, as I explain again, flicking a ten-sided dice is also not straightforward. They bounce and pitch in unpredictable ways. You need to be gentle, pay care and attention.

She doesn't listen. Her first shot hops wide and hard, whistling off the table in a fit of giggles and a red blur. This is appropriate as ten-sided dice represent lasers with poor accuracy over short range. It's a nice touch, but it doesn't stop her next two shots, with more measured strength, hitting my Carrier, the ISS Aegis. Its two shields go down, naked to the world.

For my part, I use it to launch two fighter wings. Each is a set of three concentric disks and the wing gets a shot per disk. Immediately I see I've made a tactical error. The arrow-like Carrier is a difficult target. But it's now flanked with two massive rings, the middle forming a funnel in toward my shieldless Carrier. Whoops.

Seizing her moment with glee, daughter queues up another Destroyer. It also pivots headfirst on its journey across the table. But if she hasn't learned the art of flicking fleets yet, she's certainly learned how to flick dice. Three come smashing into the wide frontage of my badly-assembled armada. Two hit a fighter wing, removing a ring.

The other hits my Carrier. Without shields to protect it, the actual number on the dice is important. One through six represent hit locations on the ship itself: its weapons system, launch bays and so on. Each has a disk which gets removed if it hit and that system is no longer functional. Another hit on that system and the ship gets destroyed. Rolling seven or more means the shot get absorbed by armour.

The Aegis takes a hit on the fighter bays. This is good because I've launched both my fighter wings. But it's bad because the bays have two numbers, two and three, meaning double the chance that a stray shot will blast it to atoms.

There's nothing I can do about that now: the Carrier has already acted. So instead I push my two fighter wings into action. I flick the biggest one hard, trying to get close to an enemy wing, then line up the three shots. The first two smack home but, neatly, removing rings makes it a much smaller target. The last one bounces off into space. My other wing, already a tiny single disk, only gets a single dice and does nothing.

Next turn I'm faced with a dilemma. Ships only get two actions, but my Carrier really needs three. I want to launch my bomber wing and fire at the enemy. I don't need those fighter bays any more but leaving them unrepaired is a big risk if I'm hit again. Grudgingly I use a precious action to patch up the launch bays and put my bombers into space.

Bombers are dangerous. They don't fire lasers, but missiles, for which you flick a standard six-sided die. It's a lot more accurate than the lasers plus, of course, there's no chance of rolling over seven and doing no damage. One of my daughter's destroyers has no shields so it's a plumb target. She takes her own risk, flicking it close to the bombers and taking a three-shot volley. Each one hits, destroying a segment of the wing. There'll be no missile salvos this game.

On it goes flicking, spinning and giggling for a couple more turns. Fighters and bombers get smashed out of space. But now I have a problem. My Carrier is not a weapons platform. It physically can't do enough damage to the two Destroyers to outpace their ability to repair. I want to call the game, but my daughter lovingly wants the chance to finish me off.

She leans in over the first Destroyer and, in her eagerness for blood, smashes it far too hard. The acrylic ship careers off the table and clatters to the floor in a fit of laughter. It's short-lived. With glee, I pick up the rules and point out that a ship off the table is "routed" and effectively dead. Sulkily, she flips the ship sheet and we find, printed on the back, the legend "Their Spirit Lives On". The sulk is short lived.

Even one against one, it's not much of a fight and she celebrates with a dive into the rulebook to look at the next scenario. After my drubbing, I'm rather more interested in the free-form rules where you can pick your own ships to a points value. But then again, the scenarios have special rules and objectives. FlickFleet looks and plays like the sweet love child of dexterity games and tactical miniatures titles. And it works so well that it makes me wonder why no-one thought to marry them earlier.

FlickFleet is currently raising funds on Kickstarter. We played a fully-featured pre-production copy.