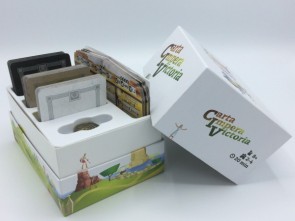 Game Name
Carta Impera Victoria
Publisher
Asmodee Editions
Designer
Remi Amy
There Will Be Games
It's the beginning of the world as we know it. The rise and fall of peoples, the evolution of ideas, the clash of nations--civilization is a weighty thing. When simulating the history of the world, designers have tended toward a maximalist approach, making vast, interlocking machines from a culture’s composite parts. Games like Through the Ages and Sid Meier’s Civilization demand a comfortable chair, a long afternoon, and a table of above-average size. Even their younger, svelte cousins like Clash of Cultures and Nations reward a certain appetite for the epic.

Enter our young upstart: Carta Impera Victoria (“Charter Rule Victory,” according to a slightly befuddling Google translation). She rolls up to the old timers’ table, middle finger in the air, claiming that she can do in thirty minutes what the gray-hairs struggle to get done in hours. Can she, with only a deck of cards, a few player aids, and a single gleaming token, condense the entire nation-building experience into the time it takes to watch a Frasier rerun?

The secret to CIV’s short playtime is a healthy dollop of abstraction. While there are 104 cards in the deck (CIV in roman numerals, which the designers are quite eager for you to notice), in truth there only six different cards in the game, each relating to a general cornerstone of a nation-state. Whereas other civilization games might have a legion card, or a ramparts card, or a trebuchet card, CIV has twenty functionally identical military cards. They are red, and they are cute--CIV employs a bold, cartoonish art style that is sure to be divisive, though I found it adequately charming. So red soldiers join green scientists and white priests and blue, uh, culture-ers (harpists and actors and other such undesirables), each representing an unknowably complex human system in orderly little stacks.

Turns start out simple--a player plays a card to their tableau and then draws up to their hand size. These cards do nothing on their own. However, get a certain number of the same color in your tableau, and you gain access to a special power you can use on your turn. For example, the military domain is all about destruction, allowing you to get rid of a useless card from your hand. Play more military cards and you’ll hit a second threshold, allowing you to purge a second time.

Each of the game’s domains specialize in a certain style of card manipulation. Religious domination increases your hand size, for example, while a robust economy will let you bulldoze old cards to quickly construct majorities in a new color. In an interesting twist, you have the ability to discard a card from your tableau in order to enact a powerful effect specific to that card’s domain. For example, discard a green science card and you’ll trigger a scientific breakthrough, allowing you to draw a heap of cards from the deck and filter for the stuff you really need.

This tension between building sets and discarding cards for game-changing moments is consistently engaging, especially considering that the game’s primary victory condition is to build a big set of a single color (seven or eight cards, depending on your player count). This challenge is compounded by the fact that everything you do is just so visible--it’s easy to see what other players are trying to accomplish, so considering how to undermine their ambitions is a concern that becomes more and more urgent as the game moves towards a conclusion. All of this adds up to a light hand management slash tableau-building game with some fresh ideas and a low barrier to entry.

What CIV doesn’t do is give you the feeling of building something grand. While it might be obvious that a small card game can’t give you the same granular civ-building experience as its heavier relatives, the gap between what you’re doing and what these actions are meant to represent is enormous. Squint and you can see some tenuous thematic connections, but if you’re anything like me you’ll soon start referring to the cards as reds and greens and blues, their connection to an epic story lost. This is a game that stirs the brain, but it doesn’t fire the imagination.

This is not to say the designers aren’t interested in exploring historical themes. Occasionally, the game does something clever to remind you of what you’re supposed to be doing. For example, the game's deck is separated into three ages that vary in their composition. Religion cards are plentiful early on and could potentially propel you to a quick victory, but as time passes and you move into the second and third ages they start to dwindle, reflecting a shift to secularism and the waning power of the church in public life (in case you were wondering, this is a game made by Europeans). So, while any level of significant detail is lost in the game’s broad strokes, there is at least some sense of change as the game progresses through time.

Despite their vast differences in scope and detail, CIV is similar in some ways to its digital predecessors. If you’ve ever played the Civilization series of computer games, you’re probably familiar with a certain experience. The first couple of turns are piddling little things, as your civilization takes its first baby steps out into the wider world. Quite a few hours later, your civilization is an overstretched behemoth, turns move like molasses, and you spend your time hoping the end is coming soon. In the same way, the early game of CIV zips along on autopilot for the first few turns, as folks play a card and pick up a card over and over until someone hits the magic threshold where something interesting can start to happen. The late game of CIV is even less satisfying, with players grudgingly wasting their turns to beat back a clear leader until, eventually, one player manages to break out of the tangle or the deck runs out and everyone counts up what they’ve got. Hardly the stuff of myth.

The thing is, while the first five minutes and the last ten minutes of the game are consistently uninspiring, the middle fifteen are pretty dang interesting. Before a clear frontrunner emerges and table talk turns to strategies for halting their progress, CIV presents a compelling field of possibilities. Is it worth trying to build up my religion domain when my neighbor is hoarding white cards? Is my strong culture enough, or do I need to start arming up to defend myself? What the hell is that guy doing, and should I be worried? Negotiating these decisions is fun but ultimately ephemeral--without a strong theme to bind it together, CIV can't quite rise to its own ambitions.
Tweet

repoman replied the topic: #286439 19 Nov 2018 06:30
You know, it's good that the world occasionally reaches out its slappy hand of justice and smacks me across the face so that I don't get to smug.

Until you pointed it out, I couldn't understand what the hell the name of the game was supposed to mean. Ah, the acronym is CIV...I get it now!

It's nice to be reminded I'm dumber than I think I am.

stoic wrote: How does this streamlined Civilization game compare to Innovation?

Outside of the set dressing it doesn't, really. Inno is all about the busted Chudyk combos and invokes its theme a bit more, especially in the later ages. CIV is a clever card game with really nice production.

I actually really liked this one. The ways it differs at each player count, the table talk, the presentation, all good by me. Solid little card game. Just don't expect Civilization from it.

Legomancer replied the topic: #286474 19 Nov 2018 09:00
I bought Andy's copy and we gave it a play. Sadly, no one was wowed. If you want a civ-like card game you're sure do be disappointed, as other games do this much better. If you don't care about the civ theme and want a card manipulation game, you still have better options. It's not bad, there's just nothing to get excited about.
Read More...