Wing It: The Game of Extreme Storytelling Board Game Review 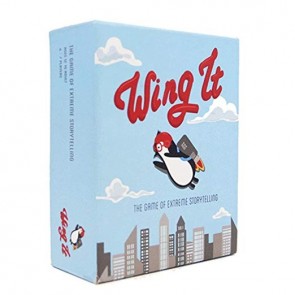 *draws a situation card and reads it out loud*

You’ve been tasked with writing a review of Wing It: The Game of Extreme Storytelling from Flying Leap Games. You have an impending deadline and no idea how you are going to start the review.

*sweats a little*
Okay, I can do this. Wing it is a game of “Extreme Storytelling”. A situation card, not unlike the one I made up for the opening, is read out loud by “The judge” and each player has a hand of five object cards, also not unlike those I also created for the opening. It is then up to each player to create a story using three of the five object cards. The tale that is picked by the judge to be the best solution to the situation wins the round and claims the card. A new player then becomes judge and the next round begins.

It is biazarro world mad libs where you are provided with three nouns and you have to fill in the rest of the story. It’s not a particularly original idea (I’ve played 3 or 4 other story telling games this year) but it is a proven formula (I’ve played 3 or 4 other story telling games this year). The traditional rotating judge system is in place and Wing It even goes so far as to give suggestions as to what makes a winning story. Things like believability, storytelling finesse and humor. In our group, it almost always goes to the person who comes up with the funniest tale and I’m pretty sure that goes for most groups.

With the formula for the game being familiar, the execution becomes of paramount importance. Wing it is up to the challenge with a plenty of cards both on the situation and object front. Unlike other games where the cards can essentially be “One and Done,” with shock or humor cards, the almost infinite combination of situation and resource cards keeps it fresh. Just because you have previously used “Overly peppy customer service representative” and a “Persian rug” to escape a erupting volcano doesn't make them less funny or helpful if you draw them to assist you in burying a hidden treasure.

Many of the situation cards are oddly specific, which gives you plenty of detail to work with. But I really have to wonder about the possible real life stories behind ones like “Being mistaken for a German Football fan in Mexico during the world cup” or “Trying to find a ride in Almaby, Kazakhstan and being refused because you are American.” Sounds like someone likes using that Kickstarter submitted situation card option for a little karma payback.

If it isn’t obvious, this is a family friendly party game. Well, it’s only as family friendly as your family is friendly. Plenty of our stories ended with someone being horribly murdered at the end of the tale by a common household item. I’m pretty sure if there is ever a “Final Destination” add-on, my family would ace it. Also, the game supports 4 to 7 players, so plan your family accordingly.

Wing it is a kick back, relax, and enjoy activity. Most of our games didn't didn't finish up when someone won “X” number of situation cards, they ended when we couldn't sit up straight from laughing so hard. Sometimes the stories just flow right though you and other times it is harder than would appear. Trust me, my original review began with “A naked blonde walks into a bar with a poodle under one arm and a two-foot salami under the other.”