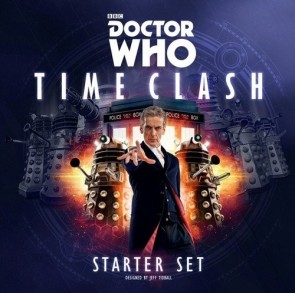 A madman in a discounted box.

Welcome to the latest edition of Discount Dive, where I explore the Discount Bin in search of interesting games. The rules are kind of fast and loose, but I try to keep it under $25.00. So, without further ado, let’s see what was “on the cut.”

As an unmitigated fan of Doctor Who, when I saw Doctor Who: Time Clash Starter kit on sale for $15.00, I barely hesitated before clicking the Buy button. Since this was an online purchase, I had some time before it arrived, so I searched for some “how to play” videos to get a feel for it. I found a couple of videos and, while the gameplay didn’t really seem that exciting from the rules explanations, what I really found disturbing was the “Review” portion of some of the videos. To paraphrase, every review ended with “Uh…yea…we had fun. If you are a Doctor Who fan…” Nothing sets off alarms in my mind like a milquetoast “If you are a fan…” recommendation. At the same time, the “You’ve already paid for this, sucker!” portion of my brain assured me that they probably just weren’t getting the nuances of the game.

Once the game arrived, I can’t say I was impressed with what I observed. Firstly, the battle between the Daleks and the Doctor, which has literally been raging since the show began in 1963, is reduced to a duel between Peter Capaldi’s Doctor and his mutated nemesis, ignoring 90% of franchise history. Nothing against the 12th Doctor but this is equivalent to doing a board game based on The Twilight Zone and basing it entirely on the episode where there was a gremlin on the wing. (Nightmare at 20,000 Feet. -ed.)
The game itself has some annoying niggles. For some inexplicable reason, it uses a scoring system based on 100 instead of simply using single-digit values. This card is worth 100. That card is worth 400. Ummm, why? Wouldn’t 1 and 4 points work just the same? Because it’s a bigger number! Do you want billion-point pinball machines? Because that’s how you get billion-point pinball machines.

You play your cards to stacks that represent the time of the struggle, the Doctor’s companion, and the enemy’s influence. Once again, the game is locked into the Capaldi era, so there is no real excitement about uncovering any nostalgia moments. This is called the Build-up Phase but it doesn't do anything to build any true excitement. Once one of the players reaches the point threshold, you roll a die that adds or subtracts hundreds of points and the game/round either ends or drags...er...continues on.

The Verdict: I feel I got “EEFed” on this one. I didn't find it Exciting, Engaging, or Fun. I’ve played this a handful of times and I have no desire to play it any more than that. Adding and subtracting points from a hand of 3 cards with the Doctor Who name attached doesn't make it any more interesting. This is billed as a “Starter Kit” but this race was over before the starting gun and the promised Master and Cyberman expansions have never showed.

January 08, 2019
Rating
1.0
Doctor Who: Time Clash
Sub-par card clash that squanders the Doctor Who IP. I didn't find it Exciting, Engaging, or Fun. This is billed as a “Starter Kit” but this race was over before the starting gun and the promised Master and Cyberman expansions have never showed.
W
WadeMonnig Top 10 Reviewer 195 reviews