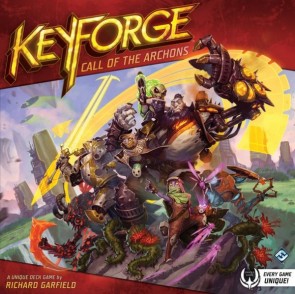 Of all the things that could be a hook, it's the names that do it. Every Keyforge deck is unique, containing cards randomly selected from those in the set. It also has a unique, computer-generated name. Some, apparently are rude. But I don't care about that. I just want to know what fantasy characters they might remind me of. So I get four.

The first two are forgettable, the third semi-nonsensical. The last deck rejoices in the name "Beergu, Champion of the Bolthole". I envisage some horrid gnoll, beer in hand, sending in minions to do his dirty work while he cowers in a bolt-hole, twirling his fur. It's got to be the best deck, right? Well, I suppose after all that excitement I better read the rules to be sure.

There are no rules included in single packs. And full rules aren't included in the "Starter Set" box, which also has two pointless, non-random tutorial decks, either. I print out a copy of the rules from online but I'm also missing tokens to play the game with. So I dive into my box o' bits and find a bunch of plastic coins and some dice and challenge my daughter to a game.

The coins are stand-ins for "aember", the resource which is the core of the game. You need six to forge a "key" and first to three keys wins. Many cards generate aember but the most reliable way to get it is to have creatures. They can fight with other creatures, pitting a single number for damage/health against each other, or "reap" to gain an aember. In doing so they become "exhausted" which anyone who's played Magic: the Gathering will refer to as "tapped".

Each turn you pick one of the three houses that comprise your deck, and can only play or use cards of that house. I play a Headhunter from house Brobnar, a mid-sized creature that gains me aember every time it fights. My daughter, rather puzzled, starts with a nasty from house Mars, Yxilo Bolter, which can safely shoot at and damage other creatures when it reaps.

It immediately becomes clear how simple, yet clever, this house system is. I want to fight with my Headhunter, which can take out that Bolter, stay alive and gain me aember in doing so. But to do that I have to call house Brobnar again, and I have no other cards from it, so my hand won't cycle. Interesting decisions immediately abound. I choose to go with Brobnar and fight because I want that Bolter off the board.

Wrong choice. Daughter responds with a direct damage card that kills the Headhunter and starts playing a slew of other cards. But after a few more rounds, it becomes clear she can't get her head around how to build combos from her hand. Her game falls apart and she declines to play again. 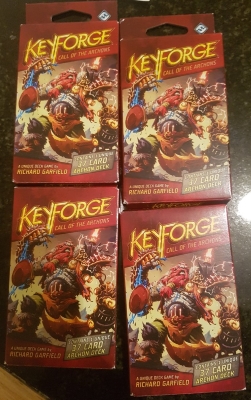 Starved of opponents, I am delighted to learn you can play online. The Crucible is an astonishing bit of wizardry that lets you play in a web browser. You can register your decks with an official Keyforge site, and then you can import them into The Crucible. I am denounced - rightly - as a hopeless noob by my first opponent. My second is not going well when I turn on cheat mode by accident. I get crushed in my third.

Perhaps Beergu isn't so good after all. But it's kind of fun trying to work that out. Win metrics are a hard measure but with so much variety in opponent's skill and decks, I need to fall back on softer, sweeter skills of estimation. Compared to the unforgiving meta of collectible games, it's a welcome and comfortable change of pace.

I paw through my cards, looking for combos. One of my decks works by inflicting whole-board damage then healing its own. Another has minions that work together to ready one another after they're used. It features a wicked Mars card called John Smith, who readies another Mars creature when he reaps. So I can use a minion, use Smith and then use the minion again in a sweet one-two.

I put it into play and draw that dynamic duo. My enemy begins to put down creatures to sweep them off the board. But I have a trick up my sleeve. I pick Brobnar and put down a couple of nasty creatures, Troll and Rogue Ogre. Then I play the instant action Follow the Leader, which means all my creatures can fight. The Brobnar beasties wipe out the opposition, and my duo does their thing. My opponent never recovers, and quits later, just as I'm about to claim victory.

I'm chalking up as a win, either way.

Next, I am given schooling in the complexities hidden by the simple pick-a-house façade, as I have all three houses in my deck in play and try to juggle them. I misread a card that lets me ready and fight with all my creatures, thinking I can simply use them twice. Later, I fail to plan through my turn properly and kill a creature with direct damage when I have later area damage that would have killed it. Deeper strategies emerge: timing is very important, as are the houses in the opposing deck.

Yet the more I play, the more it seems that card draw is a major factor in success. I won my first victory when I had a great combo in my starting hand. I lose a horrid loss when someone puts down a pair of huge creatures, one of which can remove enemies. I just have nothing in my hand - or deck, for that matter - which can counter it. It can be random and frustrating, but it's also got that gamer cocaine, knowing that next turn, next game, you might pull what you need to pull off a win.

Fired up for the game, and fed up of using plastic coins for too-generic tokens when you need several kinds, I go looking online. You can buy laser-cut sets but they're expensive. I consider the idea of getting some yellow six-sided dice for aember, but every yellow dice I find looks like winter-frozen piss. For now, I decide to stick with the coins, but it's clear that skipping the starter box isn't quite such a no-brainer after all.

On a whim, I throw my Keyforge decks into the bag o' games for the next visit to a friend. "Keyforge," he enthuses when he spots them, and pulls out his own starter box. So we play, my now-familiar decks against his new, unfamiliar ones. It's almost like learning a whole new game again. And it strikes me that wherever I take my decks, there will be new opponents, new challenges, free from the stale, stable metas of collectible games. For all the chaos in Keyforge, for all it borrows, its real novelty and freshness is its potential for eternal novelty and freshness.

Writing reviews in this narrative style is an experiment, and I'd welcome feedback. It's also quite time-consuming, so if you felt able to follow me on Twitter or even be so gracious as to back my Patreon, I'd be hugely thankful.

January 17, 2019
Rating
3.0
Keyforge
A brilliant and novel concept that promises a convenient commonality for gamers everywhere, but the execution can sometimes be lacking, especially with mismatched or underpowered decks.
MT
Matt Thrower #1 Reviewer 286 reviews

Jexik replied the topic: #291507 05 Feb 2019 08:57
I use change (pennies for damage, nickels for +1 power tokens, quarters for stun, arcade tokens for keys) and d6s for aember/chains. Works pretty well. It's nice that a single d6 will forge a key unless you've got some abilities in play that change that. Playing a bit too much on crucible cooled me on the game a bit, as did buying my 4th deck, but it's solid and I don't see myself ever turning down a game.

Sagrilarus replied the topic: #291509 05 Feb 2019 09:03
There's a free app that maintains the counts for both players that is super-simple, with big color-coded buttons to make it easy to use. My son had gotten prints of the tokens and was going to cut them out, then he saw the app and we haven't looked back.
Read More...