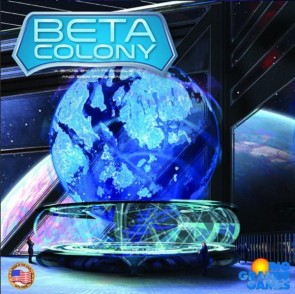 A study in modesty?

Maybe it seems a little strange to praise a game for being a humble, unassuming production with fairly meat-and-potatoes mechanisms and a mildly appealing setting. But here I am doing exactly that for Rio Grande Games' Beta Colony, a Ben Pinchback/Matt Riddle design that calls to mind those halcyon days when a game release was not also a product range release, when you'd buy a $40 box of cardboard and wood right off the shelf rather than buying a $200 box of cardboard and plastic a year in advance. It's a reminder of a time when board games didn't strain themselves trying to tell lame stories with lazy settings and bad flavor text writing. As I opened the box and looked it over, I wasn't impressed by the comparatively lower quality of the card stock and graphic design - but then I remembered the price point and saw the "Made in the USA" label on the box. And like that, I didn't care that the cards weren't embossed, linen-finished heavyweight stock, printed in China.

For many, this all might sound like a bad review but that is certainly not the case here. Beta Colony is a very neat, very concise design with an interesting action selection mechanism that uses a rondel (i.e., a spinner with the fun part removed) and dice to determine what you can do on your turn. The sci-fi setting finds defectors from the tyrannical Earth Imperium looking to establish colonies on a new planet with the goal of earning Confidence Points. You gain these by building various "pods" needed to make the titular Beta Colony viable, which points toward a simple area majority scoring scheme as players strive to have the most pods on the planet's three moons. Along the way, there are also alien artifacts to discover, cultural achievements to accomplish, and assorted interphase short-term Cycle goals that reward players for meeting various criteria. As advertised, it is a medium-weight game but mechanically I think it skews fairly light and as such it is a more accessible than Terraforming Mars, which is sort of the gold standard comparable here. There is also some mechanical resonance with Teotihuacan's rondel system, but this is a much more fun and much less complicated design.

At the beginning of a round, the starting player rolls four dice of four colors and all players set their dice to match. Each action requires two dice - one moves a player's ship around the planet (the rondel) to select an action, the other indicates the value of the action and using certain die colors may impart bonuses. You can also choose to do nothing and dock for fuel, with each fuel marker giving you a +1 on any die in future actions. Three moons offer resource collection opportunities, with each having a choice of two materials. The Manufactory allows you to select a colony pod from a display and place it in one of the three colonies. Each requires specific materials based on the space you are building it, and building one increases your Influence in that colony. There are bonuses for building adjacent to same-type pods and interspersed along the influence track. The other spaces are the Ridback, the ship that brought these ex-pat Earthlings to the planet where they can fuel up, or the Azophi Nexus where you can get any material and a fuel or build a cultural achievement.

Although this is clearly a modern design with some very obvious antecedents, it nonetheless hearkens back to more traditional Eurogame qualities. There is a smart, compelling central mechanism that channels and compartmentalizes decision-making. There are basic resource trade-ups and conversions along with simple positioning elements that result in benefits. End-game bonus buildings, long a staple in the Eurogames genre, are also present. And it is all wrapped up in about ten pages of easy to digest rules and a fairly rigid structure. Interaction is fairly low, but more intensive interference beyond the competition for majorities isn't really in the scope of this 75-90 minute game. Be aware that 3-4 players is really the best range for the most friction, although 2 player is supported.

There is plenty to consider throughout the game, and more than a little "crunch" to determining how to spend your dice, which resources to take, and what opportunities are available in terms of the colony pods, upcoming bonuses on the influence tracks, and the cultural achievement cards. Or you might find profit in pursuing the Cycle cards or challenging a majority on one of the colony boards. There's a nice balance between ease of play, structure, and agency. None of it is particularly novel, risky, or forward-thinking, but I'm kind of OK with that here.

Let's not oversell it, this is not a game that is going to change the way we play games. You aren't going to be blown away by the latest innovations in design and production here. And if you came back and said, "Barnes, I'm underwhelmed by Beta Colony", I'd shrug and not really be surprised. I'm quite taken by the modesty of this design. I'm enjoying that it's just a good, solid game with no baggage or additional purchases or drama attached. It's the kind of thing that eight or nine years ago would have had a higher profile. Indeed, it is very much like the best games that the great Rio Grande Games was producing in the times before Kickstarter. It's a return to simpler times, and for game players like myself that have been around for a while, I find it really refreshing to see titles like Beta Colony that aren’t asking me to do anything other than to play it and enjoy it for what it is, for as long as it is on the table.

Vysetron replied the topic: #295718 18 Apr 2019 14:02
I picked this one up for most of the reasons that you recommended it for. The old school single-mechanism focus, the interactivity, the US production, it pushes a lot of good buttons for me. Haven't gotten to actually play it yet (beyond running through it to solidify rules) and I don't feel pressured to, but that's fine. It'll be there.

Josh Look replied the topic: #295734 18 Apr 2019 15:37
I quite enjoy this game. No, it isn’t going to set the world on fire, but it does what it sets out to do very well. It calls back to a day before Euro games offered VPs for engaging every single facet of the design and instead rewarded players for playing the core elements well.

I think the scoring system is a little convoluted but I *love* what it accomplishes. If you have control in one area but I kept a close race on you, I should be able to mess with your points a bit more than if I half-assed it just to get second place. Such a smart way of handling that.