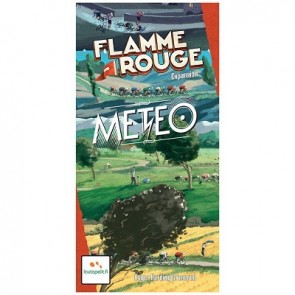 Meteo: from meteorological: to do with weather. And it's Italian? For the love of... If I would have known there would be so much foreign language in board games, I would have paid more attention in class.

As you probably gathered from the name (unless you guiltily had to google “Meteo”), the Flamme Rouge: Meteo Expansion is all about weather. Crosswinds, Tailwinds, Headwinds and Wet... winds. (Okay, the last one is simply Wet but they seemed like they were on a roll there.) A new set of rules for each weather condition are included along with tokens to randomize the race's atmospheric conditions and standees to represent them.

Crosswind means that if you are on this tile/in this area, you will never give or receive slipstreaming.

Tailwind mixes it up a bit. Instead of simply drawing the typical four cards for your turn, you draw five and select one. It's means there is a little less luck of the draw when you have the wind at your back.

Headwind is the expected flip-side: you only draw three cards instead of four for movement when you are racing though this area. I have nightmares about this, thinking of the times I was sprinting for the finish when I drew three exhaustion cards and my final 9 card with my Sprinteur. Not getting a chance to pull that final nine rates right up there with tugging on Superman's cape and spitting into the headwind for horrible outcomes.

The final area type is the glorious Wet. If you end your movement in a Wet Area and you lost one or more spaces due to being blocked by other riders, you must resolve a “Crash.”

If getting “blocked” and losing crucial movement wasn't punishment enough, a “Crash” puts your rider over on his side. The next round any card you play will be resolved for two movement less than what is indicated on the card. So, play a two exhaustion card and your rider simply stands back up and doesn't move. But the true beautiful disaster scenario is if the road is blocked by a downed rider. If it was a single lane tile, a lone rider could do this. A double lane would need two downed riders to block. But when this does happen, it allows NO ONE to pass. If their movement would cause them to attempt to pass the crash, they instead stop one space before the crash... and if it also happens to be a wet tile- Bam! We're going to need a clean up on Lane 1 and Lane 2 along with lots of Neosporin.

Per the instructions, you give straightaways a weather condition but, honestly, Rain/Wet is the most exciting one. I mean, nothing stops you from declaring the entire race taking place in the rain and using the included rules. Heck, I think it is more thematic to have turns be the crucial and dangerous points in a wet condition race. And the Cobblestones from the Peloton expansion that narrow the track down to a single lane? Oh, those BEG for a micro-burst rainstorm to foul up the race. Skinned knees and road rash elbows are awaited.

The packaging on the version I received was minimal. It was just the unpunched weather pieces shrink-wrapped together. If this keeps the MSRP down, I'm all for it. I have tossed the insert from the base game at this point and fit all of the expansions in the starting box and I'm pretty sure everyone else with expansions has done so, as well. It is one less expansion box that I have to feel slightly cringey about recycling.

I'm not sure how I feel about the actual weather standees. Sure, they are cool representations of the various weather types but sometimes I just find them annoying for blocking the view for a portion of the table and they tend to get bumped and jostled when you are moving through the areas. About half the time, I leave the standees off the table and just use the weather tokens next to section they apply to. Or, as I mentioned above, we just declare that the entire race is taking place in the Rain.

Crosswind, Tailwind, and Headwind are exactly what I've come to expect with the expansions for Flamme Rouge: subtle changes in a game filled with subtle strategy. Wet is the wildcard; the Sprinteur plowing directly into the apple cart and upsetting it. It's a low-priced expansion that's worth it for the addition of the rain condition alone.

May 02, 2019
Rating
3.0
Flamme Rouge: Meteo
Crosswind, Tailwind, Headwind are exactly what I've come to expect with the expansions for Flamme Rouge: subtle changes in a game filled with subtle strategy. Wet is the wildcard, the Sprinteur plowing directly into the apple cart and upsetting it. It's a low-priced expansion that worth it for the addition of the rain condition alone.
W
WadeMonnig Top 10 Reviewer 195 reviews

ubarose replied the topic: #298004 05 Jun 2019 12:40
Have you played Um Reifenbreite? It's the only other cycling game I have played. I was wondering how Flamme Rouge compares.

ubarose wrote: Have you played Um Reifenbreite? It's the only other cycling game I have played. I was wondering how Flamme Rouge compares.

I have not had the pleasure of playing Um Reifenbreite, but from the description, it sounds distinctly different.

Virabhadra replied the topic: #298021 06 Jun 2019 06:14
Have you tried Bisikle? It's a Flamme Rougue-flavored Pitchcar that I keep thinking these reviews are about.

Anjou Valentine wrote: Have you tried Bisikle? It's a Flamme Rougue-flavored Pitchcar that I keep thinking these reviews are about.

I have played it, during a dexterity induced con weekend. It didn't really stand out to me as it had so much in common with Pitchcar.

ubarose replied the topic: #298034 06 Jun 2019 10:28
I think that Bisikle requires slightly less skill than Pitchcar, and the balls don't go flying off the track the way the disks can with Pitchcar, making Bisikle is a good choice when playing with children (or drunk people).
Read More...