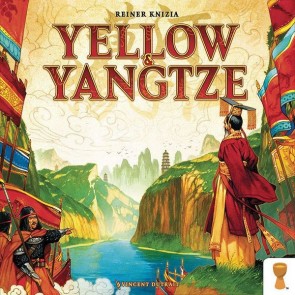 I'm not sure you can review Yellow & Yangtze without at least mentioning Tigris & Euphrates, so I'm not even going to attempt it. Both are designed by Reiner Knizia , both center around twin rivers and they share a majority of concepts and mechanisms. I am by no means aTigris & Euphrates aficionado: I'm more of a peripheral player. I thoroughly enjoyed all of my plays, I adored the strategy but I had to be honest with myself, it was always going to be a game that I played another person's copy of. I was simply never going to get it to the table with my core group on a consistent basis.

Yellow & Yangtze gave me hope that, yes, I could successfully introduce this to my family gaming group. It's easier to teach, more forgiving and more accessible than it's predecessor. Going into my first game most of the players had not even played Tigris & Euphrates. “Perfect.” I thought. “No preconceived notions of what to expect and no need to “unlearn” strategies and slightly different rules.” I stretched the truth and introduced it as a “Kingdom Building” game...and our first two games played out like that. In these two and three player games (respectively), everyone established a “city” and the other players did almost exactly the same. There was plenty of jealous eyeing of other players resource generating pagodas but a few ill-conceived forays into conflicts on my part only reinforced the “separatists” mentality of all the players. I lost both of these games but Yellow & Yangtze does this “thing” that I absolutely love about board games: it has me thinking about moves and strategy long after the actual game was finished.

Our third game included a full compliment of four players; all with least at least a game or two under their belt. This time I went in with a true plan: a balanced empire that is willing to ebb and flow with the tides of fortune, not afraid of timely conflict and to stop the wild cube pagodas from being dominated by one player. About half-way though the game, my wife looked me directly in the eyes and said “This is a (expletive deleted) strategy game! What did I tell you about sneaking these to the table?” The gig was up: I was a sneaking strategy game table sneaker. Where Tigris & Euphrates can live and die by huge (often times player devastating) wars, Yellow & Yangtze is often about small, vicious conflicts...sometimes over a single cube. Yes, my lovely wife, this is a strategy game. Inevitably, there will be revolts and wars...and sometimes it won't be to benefit my kingdom, but just to prevent your kingdom from gaining an unassailable lead.

Your score is determined by which of the four basic colors (Black, Red, Blue, Green) you have the fewest Victory Points. Yellow/Gold is the wild color, allowing you to use them as any other color. This demands that you play a balanced strategy. Leave it to a game about Ancient China to point out that getting three times your nearest competitor's Military Victory Points might just cause the other aspects of your Kingdom to suffer. Don't get me wrong: This game revolves around conflict but not always in traditional sword versus sword way. “Revolts” can cause you to lose a facet of your kingdom. Stepping back and looking at it in a thematic way, it can be a rise of a new faction or a different political ideology that causes a shift in the focus of your territories. “Wars” are external conflicts that occur when you come into contact with other kingdoms. Usually they take place over resources or territory. They almost reinforce the idea that War should be as a last resort, as they usually end up fragmenting a kingdom and can sometimes lead to weakening both sides. They also allow players not directly connected to the War to give aid to one side or the other, possibly swaying the outcome.

Yellow & Yangtze gives you plenty of choices of what to do on your turn. Farmer tiles allow you to place more than one of that type of tile per turn. Or you can discard two farmer tiles to incite a riot, removing a key tile from a Kingdom. Leader tiles, while usually needed to gain Victory Points of that type on the board, can also be used as a boost when they are actually off the board, requiring less tiles to be discarded or lending assistance during conflicts. Pagodas, which are built on a base of three like-colored tiles can be moved, stolen or even temporarily destroyed. All of these options helped give me the feeling that the game was never “out of control” or that I simply had “bad tile draws.”

So, was my gambit to introduce Yellow & Yangtze to my family gaming group a success? Not really...but at no fault of the actual game. The almost constant friction of empires grinding against each other, the ability to tear something down in order to boost yourself up, and the overall viciousness of a well-played game (You know, all the things I really love about the game) took a little of the enjoyment out of it for some players. I can still occasionally get it to the table with the family, but usually with plenty of “Why you have to be so mean?” comments.

Yellow & Yangtze is easily one of the best titles I've played from 2018. It is more than worthy to be mentioned in the same sentence as Tigris & Euphrates and that is no small feat. If eyes-narrow and sly smiles come across the faces of your gaming group when “vicious strategy games” are mentioned, take your chance to sell your buddies down the twin rivers.

May 14, 2019
Rating
4.0
Yellow and Yangtze
Yellow & Yangtze is easily one of the best titles I've played from 2018. It is more than worthy to be mentioned in the same sentence as Tigris & Euphrates and that is no small feat. If eyes-narrow and sly smiles come across the faces of your gaming group when “vicious strategy games” are mentioned, take your chance to sell your buddies down the twin rivers.
W
WadeMonnig Top 10 Reviewer 195 reviews

Legomancer replied the topic: #297464 22 May 2019 07:26
Fantastic game and a worthy companion game to T&E, looking at different time and geographical scales. T&E is all about rising and falling empires; Y&Y about local power fluctuations. Both excellent in their way and worth having both on the shelf.

Ah_Pook replied the topic: #297479 22 May 2019 12:05
Thanks for the review! This game kills me. It looks so good, and I love T&E... But I also can't get anyone to play T&E with me consistently. Do I really need to add New T&E to my groaning shelves to sit unplayed next to it's older sibling? I've resisted so far, and will continue to do so (until I see a great deal on Y&Y at least