Play Matt: Where The Wildlands Are - The Expansions 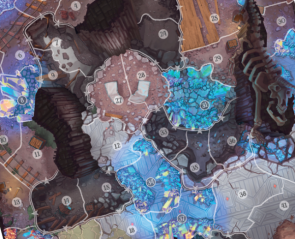 Geeks love stats and lists. It's always fun to see who rates what well. But it's often more interesting to look not at scores, but at outliers, at games that divide opinion. There are lots of reasons why certain titles prove controversial, but none of them applies to 2018's Wildlands. I gave five stars to this tactical Skirmish game from Martin Wallace, and it was one of my top three titles that year. And I expected everyone else to love it too. But it has not proved so. In fact, it's proved a real Marmite game: many loved it as I did, but many others loathed it. Why?

Some of the reasons are subjective. A common one is that the usability is poor, with confusing layout and art on the cards, which is fair but hardly game-breaking. Complaints that the miniatures are hard to differentiate seem odd, since they go from mechanical spider-halflings to giant library golems. Another is simply that there are too many skirmish games. That's harder to counter as it's down to taste but I'd put Wildlands right up there in the top three.

A more serious accusation is that the framework of the game is too simple to be interesting or to make an engaging narrative. The card actions do boil down to move, attack and defend. But that's been enough to keep the entire wargaming hobby going for decades. For me, there's enough excitement and positional variety for those three actions to build a compelling game experience.

But if Wallace and the publisher Osprey were going to do something about that perception, the place to do it would be in new figure expansions. It's clear from the rules that there's plenty of scope for new material and Wallace told me himself that it was part of his plan. So it's unfortunate, then, that the first expansion Wildlands: The Unquiet Dead, doesn't add a whole lot to the game (rating: 2/5).

What differentiates the dead from the warbands in the base game is flexibility. Rather than matching action icons to individual figures, the dead have only two character icons across six characters. So you're more likely to be able to take the action you want with who you want. The tradeoff is they have fewer actions available and are bad at picking up crystals, one of the two sources of victory points.

Arguably, this removes some of the interesting decision making from card play. It's a little one-dimensional: this is a warband designed for aggression, to reap points by felling foes not collecting crystals. This does address one criticism of the game, that it is simply a bit dull. In his well-written review of Wildlands, Charlie Theel lambasts it for lacking "untelegraphed explosions of power". And that's exactly what Wildlands: The Unquiet Dead delivers. By making symbol matching more likely, it makes it easier to create killer sequences of cards.

The set also includes a variant where slain base-game characters can return as zombies, but it adds bloat for little gain. It doesn't include any new crystals or an extra coloured base for play. This isn't going to be enough to silence all that many naysayers.

What might help get more folk on board is some new mechanics. And, fortunately, that's exactly what the second expansion, Wildlands: The Adventuring Party (rating 3/5) provides. It's nice and simple, as you'd expect: a healing icon. Not a massive impact, but it has a surprising payoff. It provides a bit of that extra variety and theme some critics want while also addressing another complaint.

Skirmish games tend to two players for a reason: it's very easy for additional players to become kingmakers. This doesn't bother me. I find the associated trash talk great fun, and a skill in its own right. It especially doesn't bother me in Wildlands because the way movement and maps work makes it hard to implement. But critics point out there's still one problem: if you wound an enemy, and someone else finished them off, they get the point even though you did the work.

Healing helps ameliorate that issue. Not completely, of course. But it's better than nothing. Plus the Adventuring Party has more to recommend them. The warbands in the base game each have a distinct play style, but the Adventurers have a distinct play style for each figure. That makes them both more frustrating and more flexible, and fun to play. Plus the included variant which has the Party as an AI controlled opponent for the human players is pretty fun. It's a bit clunky, but it ups the amount of combat, excitement and theme.

That said, having road-tested two new warbands, I have to admit that I can understand folk who think the game lacks enough moving parts to keep it interesting. There is only so much you can do with matching sets of icons on cards, even when it comes to adding new ones. Rather, it feels like the four sets included in the base game showcase most of the diversity the game is capable of. So while new figures are welcome, they're not where the main source of my interest. What makes the game come alive is not the card play, but the combination of symbol matching with board position.

No surprise then that the final new expansion, a double-sided board called Wildlands: The Warlock's Tower & The Crystal Canyons, is the best of the lot (rating 4/5). The canyon, as the name suggests, has a convoluted ravine running through it so it makes heavy use of the high ground rules. The valley has the potential to become a killing ground so, of course, that's where players put all the crystals. The tower, as the name suggests, has a tower in it and the map is studded with portals which count as adjacent. One is in the center space, which also has line of sight to the entire board, making it a prize worth fighting over. Both maps are way more interesting and dynamic than the base game ones and, as a bonus, the art explodes with lurid colour and imagination.

So I'm happy that the next upcoming expansion, Fall of the Dark House, is yet another board pack. We'll see how it plays when it arrives. In the meantime, if you're off to the UK Games Expo, you can pre-order anything else you fancy from the publisher's website. I'm not sure if the expansion material helps much in explaining the mixed reception Wildlands has had. Not least because, for me, the base game is good enough by itself, straight out of the box. And given the way too many games are sold as modular expansion systems nowadays that, on its own, ought to be enough for a recommendation for anyone.