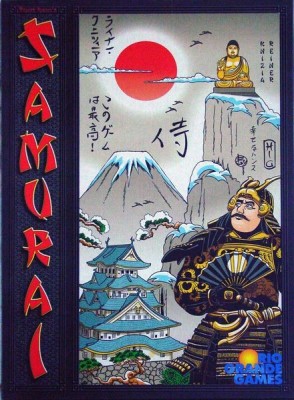 Game Name
Samurai
Designer
Reiner Knizia
There Will Be Games

Most eurogames kind of suck. Converting a blue cube into a red cube into an orb cube into a victory point is boring. I don't play competitive board games to do currency exchanges for 90 minutes, I play them to fight.

Reiner Knizia's Samurai has two great tricks: it provides a great fight, and it also lets you trick your eurofriends into playing one of the best area control games ever made. In order to fill my Writer's Simile Quota: Samurai is like whiskey. It seems simple at first and you'll likely get burned on your first try, but stick with it and you'll acquire a taste for one of the best strategy games ever made. You might become a bit more insuffrable in the process as you try to get more people to try it, but acceptable losses.

Turns are simple: play a tile, draw a tile. This is sort of a lie, but it's a really effective way to ease people in. Generally speaking you'll be placing one tile with a number and resource on it next to a matching resource that you'd like to take. Once the resource is surrounded you check to see who's got the biggest number and give it to that player. In actuality your pile of tiles contains some with a "fast" icon, which allow you to perform region-sweeping combos, cut areas off, quickly surround a contested area, or attack from sea spaces which is otherwise impossible. You've also got wild Samurai tiles that count as every resource. Sound tough? Agonizingly so! But simple. Play a tile, draw a tile, maybe do some other stuff. You'll manage.

All of this culminates in a very Knizia scoring. The winner is the player who has majorities in 2 of the 3 resources. This will rarely happen unless the game was a total stomp. Most games end in tied players totalling their non-winning resources to determine the winner. Maintaining perfect balance between your strengths and weaknesses, not allowing yourself to lean too hard into anything while knowing when to commit hard to dominate a region, this is the game of Samurai. And it's glorious.

Despite looking completely abstract I consider Samurai a richly thematic game. You aren't just commanding a squad or an army, you're the highest ranking military official in your faction. You make the high level decisions that shape the course of not just battles, but the entire war. Your attacks, feints, and maneuvers are on a scale that can be felt across the entire map. You can win the favor of the farmers with a single order, but will that give your opponents an opportunity to dominate the religious caste? More importantly, is that sacrifice worth it? Hope you win the tiebreaker, general.

Samurai is a nigh-perfect board game. Short rules, nuanced play, difficult decisions, great aesthetics, and somehow it does all of this perfectly at all its player counts? Knizia is a wizard. I don't understand how he does it but by god did he do it here. And in under an hour, no less. Many would say that Tigris & Euphrates is a better game and I agree that it's a phenomenal design, but Samurai remains my favorite for its simplicity and sheer depth. If I were to spend my time mastering one game this would be a serious contender. I could play it forever and never get bored. Hell, it's lasted years for me so far. I probably will.

My memory is of a game that lacked almost any excitement and tension. Yes, on occasion you place a tile with an instant impact. But mostly you're just putting numbers down, adding them up, maybe getting a majority.

Vysetron replied the topic: #299234 04 Jul 2019 09:56
Samurai doesn't reach its full potential until everyone at the table has a handle on it. Then it becomes a game of feints as you bluff shows of force in areas you can't actually win, followed by huge turns that take things you had no business taking, and shouting as a result. It's great.

Gary Sax replied the topic: #299235 04 Jul 2019 10:28
Another of these very high interaction euros... it's always interesting that Knizia is still considered king of the euros even though the hobby part of the genre has zagged away from his games, though I think it's coming back.

After playing twice I sat down and examined the board in detail. I discovered there isn't a single hex on the board that is more strategic than another. Perfectly homographic. There's not one lick of favored ground. I found it dry and the scoring asinine. This is one dull Knizia title.

That said, I don't seem to have anyone who agrees with me, except Thrower apparently. The only other person I've seen kick it to the curb.

Jackwraith replied the topic: #299242 04 Jul 2019 23:24
I'm conflicted. I like the design. It has that Knizia hallmark that makes it seem like it's going to be more complicated than it actually is until you play it and realize that it's pretty straightforward. Then you play it again and realize that there's a fair amount of depth in it.

Howevah, unlike a lot of his designs, I think some of the simplicity here breaks down on repeated plays, such that you feel like you're forced into particular actions, rather than have options to try to take different angles in approach. One thing I've definitely found that improves it is having four players. Three is OK, but two is just poor. With four players, there's so much activity on the board that it can lead to more interesting decisions and changes in play. And, I'm sorry, Vysetron, but I find the theme here as pasted on as anything else Knizia.

In short, I want to like it more than I actually do.

That's why the bluffing/feinting element and watching the majorities is where the game is.

Vysetron replied the topic: #299258 05 Jul 2019 10:05
What gives the board life is the players seeding the resources. If you play with them randomly put out I could maybe see it getting stale, but the players effectively constructing the map each game is hugely appealing to me.