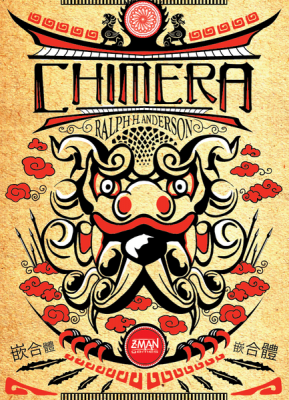 It's time to take a break from work. No more staring at monitors, no more phone calls, at least not for a little while. The usual suspects find their way over to unused office that has lots of natural light and a good card table. Only 3 today? That's fine. Great, even! At any other count we would just play a card game. But 3 players is special. 3 players means we play Chimera.

Chimera is more than a game. Chimera is a ritual. Shuffle, cut, flip, burn, deal, and it begins.

When my work group has 3 players we play Chimera. That is the rule. It's our most played game by a solid margin as a result and that's likely not going to change. We actually ended up playing Tichu as a result of how good this game is as opposed to the other way around. Tichu is the game from which this is derived, and Tichu is great, but Chimera is better.

The deck is essentially a standard 52 card pack, albeit with different ranks and gorgeous art to help you remember rules like "2s are worth 10 points" and "the piya is the green monster, not the blue one". Oh yes, this is very much one of -those- games: a classic-style card game with esoteric rules that you just kind of have to lose at until they finally click. The hardest of these is the massive list of legal plays that one can lead with, which includes all sorts of assorted sets that you can "attach" garbage cards to in order to whittle your hand down the fastest and go out first. You do that, and you score points.

Of course a game in this genre has a bidding system and it's here that Chimera makes its biggest change. Players bid points; either 20, 30, 40, or a cowardly pass. Whoever bids the highest or calls 40 first becomes the chimera for the hand, receiving a few extra cards and forcing the other two players into the role of hunters with an uneasy alliance. They're then allowed to pass cards to their partner, up to 2 if the bid was high, but cannot discuss what it is they're handing off. If either of the hunters go out first the chimera is defeated and takes their bid as negative points, but if the chimera succeeds their bid is doubled and they can potentially receive additional bonuses if players did cool things during the hand like playing trick-interrupting bombs, shutting out an opponent entirely, or playing the almighty Chimera Flight.

And oh goodness do cool things happen. Playing Chimera feels like you're performing some kind of high flying card based trapeze act. Each player is largely in it for themselves and as a result it behooves them to make big, flashy plays when it often wouldn't in similar games. Want to play sequential triplets with attached pairs to drop over half of your cards? Go for it, there's no partner to hold you down! No one can stop you! Except, you know, yourself, because now all you have is a handful of crappy singles and the Chimera is probably going to go out first. Hubris claims another victim.

This is why I give the edge to Chimera over Tichu. Because you're in control of your own destiny more often the aforementioned high moments are even higher. Winning a 40 bid with a pile of treasure as the Chimera feels incredible. You only need 400 points to win and a particularly good hand can get you nearly half of that in one go! But crucially, the lows are far less low because bids don't punish nearly as much as they reward. As such everyone is actively encouraged to do "the cool thing" at all times. Sure you may fall, but think of how high you could soar!

I also just adore the production (Z-man ed). I know it's a barely modified standard pack, but it's a gorgeous one. The art on the creatures and heroes is tattoo-worthy. The card stock is lovely. 100s of hands played and our deck is worn from all the shuffling but shows no sign of marking. It's a well loved thing, and one that we aren't going to be retiring. Chimera carries the elegance and depth of a classic card game and does it effortlessly, as if it's been around for much longer than it actually has. It's a modern classic and deserves to be recognized as such.

What a game. What a ritual.