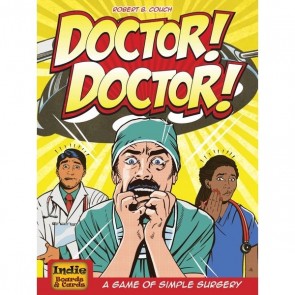 Doctor, Doctor, Give me the news. I've got a bad case of dropping cubes.

Hand Check: Who else was afraid to play “Operation” as a child because they thought it would give you an actual electrical shock if you touched the sides? Just me? Well, bury those childhood fears, sharpen up your scalpel (or tweezers, in this case) and prepare for another round of cut-rate surgery.

Doctor! Doctor! looks like a game you constructed on a bet out of what was inside your board game/junk drawer. A pair of tweezers, some odd-shaped cards, a variety of different size cubes, and a plastic “operating table” that looks suspiciously like an insert that holds all of the cards. Pick a card to decide which operation you will attempt and how many victory points it will be worth. You could be removing bone, brain, heart or lungs. I mean, I can't say I've ever been to medical school but unless they redesigned the human body, I never realized there were multiple brains and hearts inside one person. (Over the last few years, I've suspicioned that some people lack both of them but that is a different game.)

The single biggest concern in Doctor! Doctor! isn't skyrocketing insurance costs or if pre-existing conditions are actually covered, it is something even more dire: Can you handle shuffling this stack of oddly shaped cards...all together...multiple times per game. And then place them into a twisted (but stable) stack below the patients body. Is this some sort of reverse OCD test? 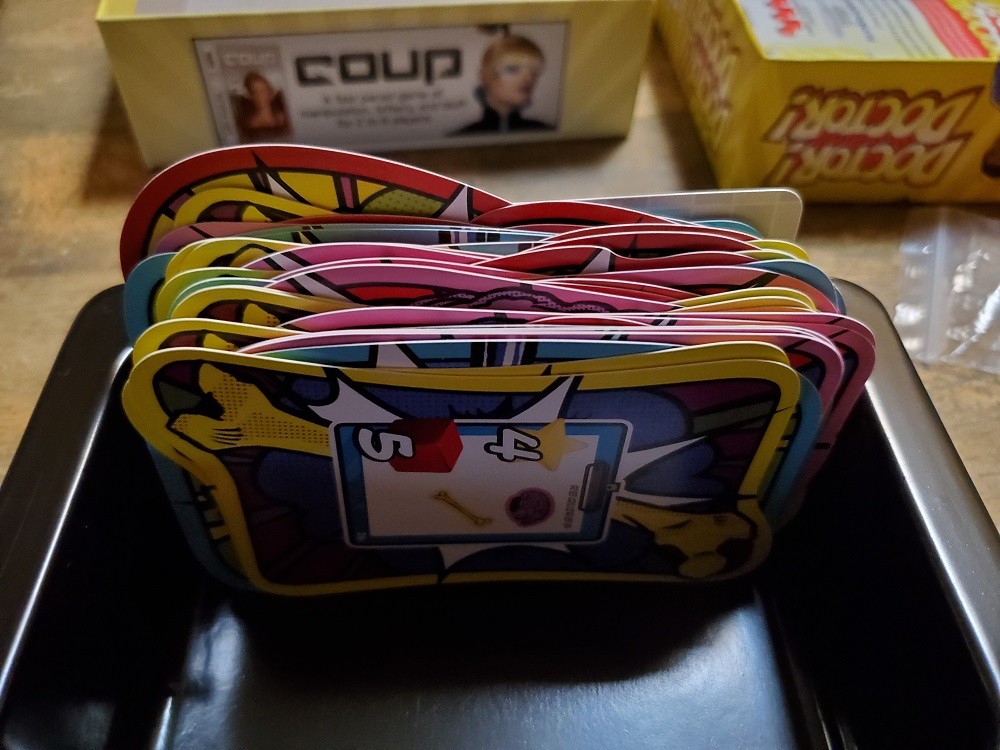 There seems to have been a problem securing an anesthesiologist. Being awake is one thing but the look on the obviously conscious patient is one of pure horror. Now, just request the patient sit still while you stack some cubes upon their chest. Don't worry sir/madam you will be just fine as long as these cubes, which represent your blood pressure, don't tumble over. Why? Um, something about falling blood pressure or maybe your BP crashing down, I might have missed that day. 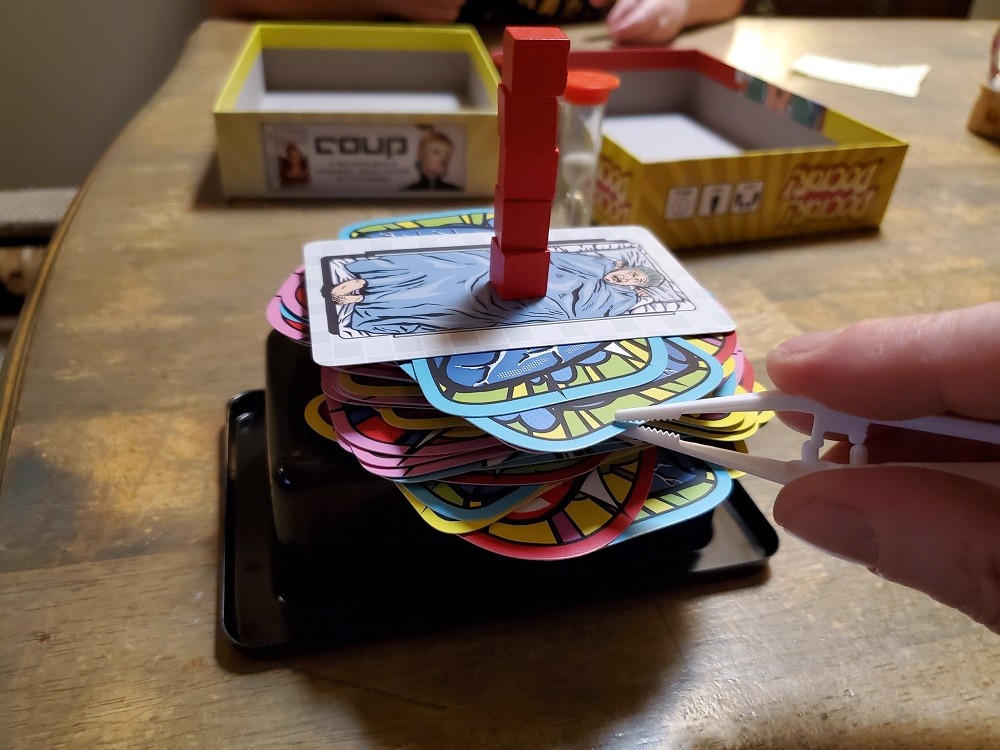 Just hold still while I start this sand timer. Yes, a sand timer...Like sands though the hourglass, so are the (limited) days of our lives...wow, that got dark quickly. If you can manage it, I suggest finding a nice timer on your phone that speeds up the pulse rate as it counts down until it flat lines when it reaches zero. Hmm, that didn't make it any less dark, did it? 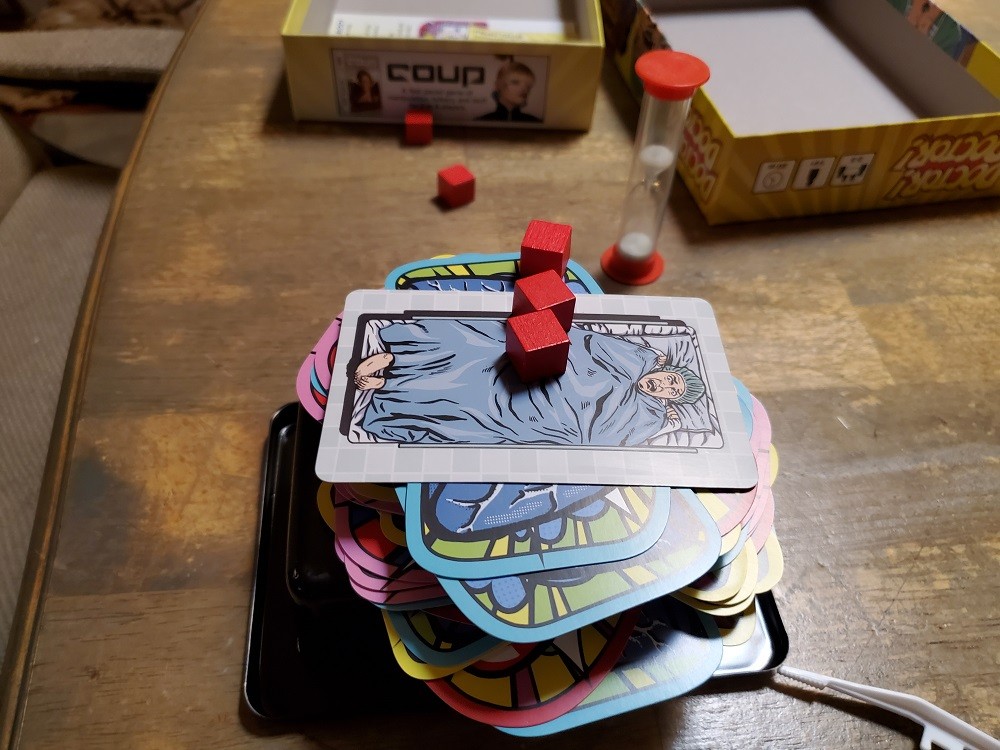 So, remove the proper body parts and score the victory points and the first person to 12 points wins. It seems simple enough. But there are a few more “Operation Fail Conditions” that cracked me up. “If the Patient's Body falls or slides off the Operating Table” Fair Enough. “If you remove more cards (Body Parts) from the Patient's Body than are identified on the chosen procedure card” Obviously, that would be an extra charge. “If you touch the Blood Pressure Cubes after the timer starts” There will be no inappropriate blood pressure touching on my watch.

As a veteran of many a drunken Jenga game and someone who prefers to plead the 5th about playing drunken Doctor, I don't mind playing a simple dexterity game. I don't even care if it is a difficult dexterity game. But is Doctor! Doctor! difficult or simply annoying? It gives you room to learn a few basic strategies for removing body parts and you can increase the difficulty by replacing the large wooden cubes with smaller plastic cubes (Somewhere, in Tokyo, a monster is frantically searching for his missing energy). But between clumsily shuffling the odd-shaped cards and the few laugh inducing moments of watching other players fail, there isn't much appeal to playing. 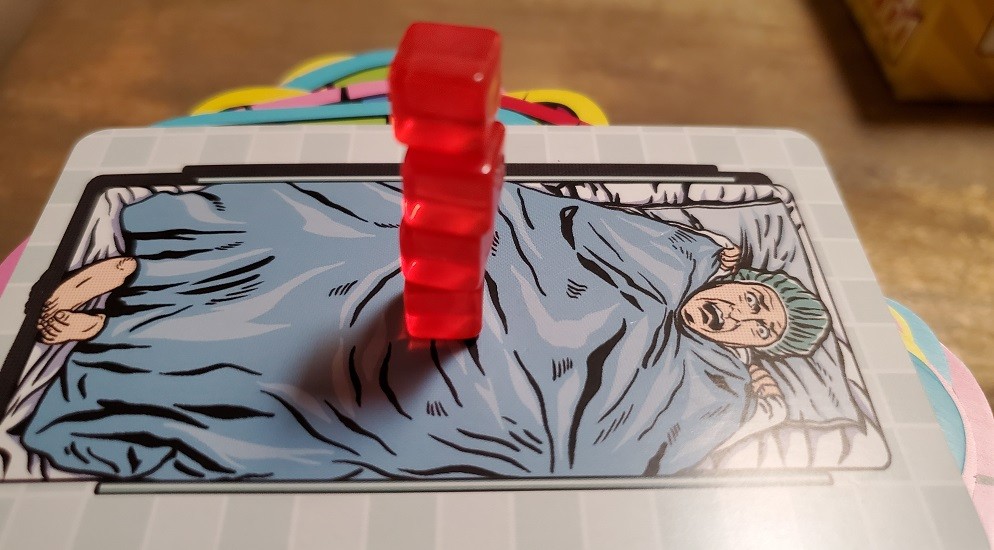 In the realm of “light” games and “filler” games, Doctor! Doctor! is more like a bit of fluff. Sure, it probably cost less than the co-pay of an doctor's office visit but it is also about as pleasant.

August 17, 2019
Rating
2.0
Doctor! Doctor!
In the realm of “light” games and “filler” games, Doctor! Doctor! is more like a bit of fluff. Sure, it probably cost less than the co-pay of an doctor's office visit but it is also about as pleasant.