Parks Board Game Review: Keymaster Games is Knocking it Out of the Park(s) 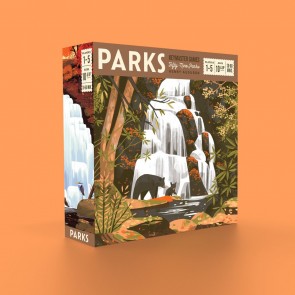 The National Parks Service is a keystone to, well, everything that defines “An American Family Summer.” Packing up the station wagon (sorry, SUV), tossing some sandwiches into a picnic basket, and heading to a beautiful landmark is practically nostalgia personified. Keymaster Games packages a recreation of that truly American experience into the Parks board game that actually does it justice.

Every copy of the game feels like a deluxe edition. The production is beyond reproach. A metal first player token, unique animal meeples that act as wild (“wildlife”) resources within the game, and linen-textured cards. It has a small footprint (or, in this case, about the size of a hand-print). And, of course, you can blow that out of the water by getting the utterly cool, but completely unnecessary, playmat.

Parks has easy to explain and grasp rules. It is “Family +” weight and player's who break out a game once every month or so are going to rave about this title in a way we haven't seen since,well,Wingspan. It is a worker placement with diminishing places to put the workers. Let me back up a second: Each player has two “hikers”(workers) they they move along a randomized trail where they gather resources which are spent to visit different parks that are revealed on the tableau. Note: you are “visiting” (not buying) parks. Except that after you visit a park, you place it in your collection and no one else can visit it. Yea, it sounds like a political black hole I am going politely skirt around thank you very much...and I haven't even mentioned being able to “reserve” a park, which allows you to place a park in your collection to “visit” later and removes it as an option for the other players. 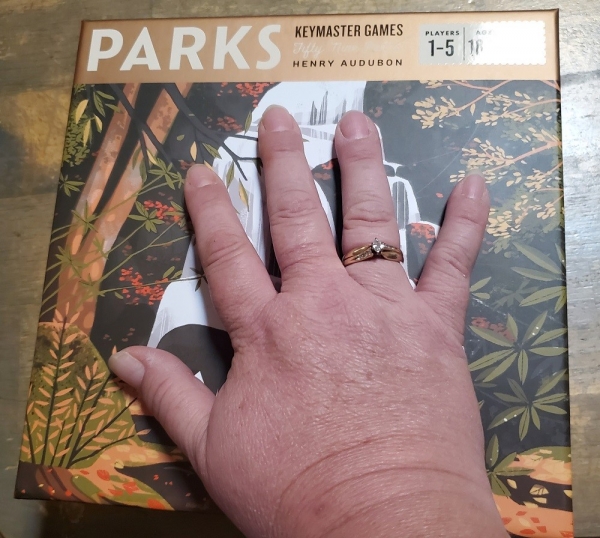 Parks checks all the marks for a quality worker placement title. It has the variables of random order locations on the ever changing trail along with another layer of irregularity in what resources will be added to those tiles with the season cards. On your turn, you can move any of your hikers to any space on the trail that is currently unoccupied. Once you are on a space, you must take whatever action it shows and you can't “reverse” down a trail. If you want to occupy a trail space that another hiker is currently occupying, you must use your “campfire” (which can only be used once per season). It is an interesting take on hiker placement since, yes, the number of spots you can place your hiker gets less and less but you and the other players control how they diminish. You also have gear cards that you can purchase with the sun resource which can reduces the amount of resources required to visit a park or gives you other rule-breaking powers. 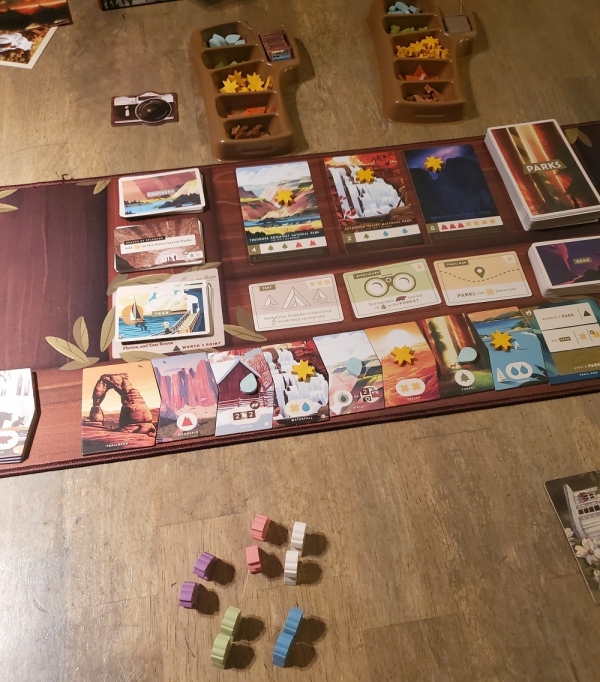 As I said earlier, Parks is a “Family +” weight but we did have an abnormal amount of “But, can you..” questions cropped up during our first few plays, meaning the instruction manual will be making regular trips out of the box the first few games. Questions like “Is there a limit on the number of resources I can have?” (Yes: twelve) and “Can I use my Campfire to remain on a space I already occupy with another player?” (No, not unless you have a Gear card that specifically allows it). 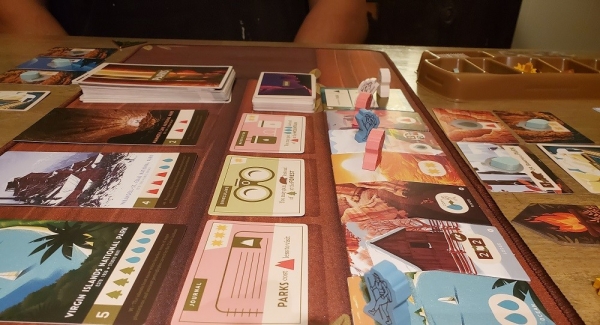 While most of the cards in the game are smallish, the Parks cards are Tarot sized. The art on the Parks cards isn't just stunning by boardgame standards but by any standard. It is provided via FiftyNine Parks (which you can check out at https://59parks.net/ ). A variety of artists (all which are included and credited in the game manual) give the player awe inspiring renderings of a variety of national parks in the United States. 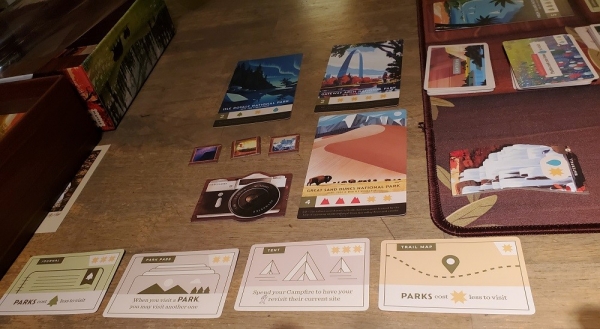 At risk of sounding like a broken record, once again Gametrayz nails another “insert.” What's a pet peeve of ANY game with multiple tokens? When you have to reach across the table to get them. Parks/Gametrayz simply solution is to split the insert the holds the tokens into two separate trays. Bam, drop one on each side of the table and reaching across the table is almost completely eliminated. Whatever geometrical wizardry that Noah at Gametrayz is casting feels and looks like a natural 20. A place for everything and everything in its place and all in a reasonable sized box. 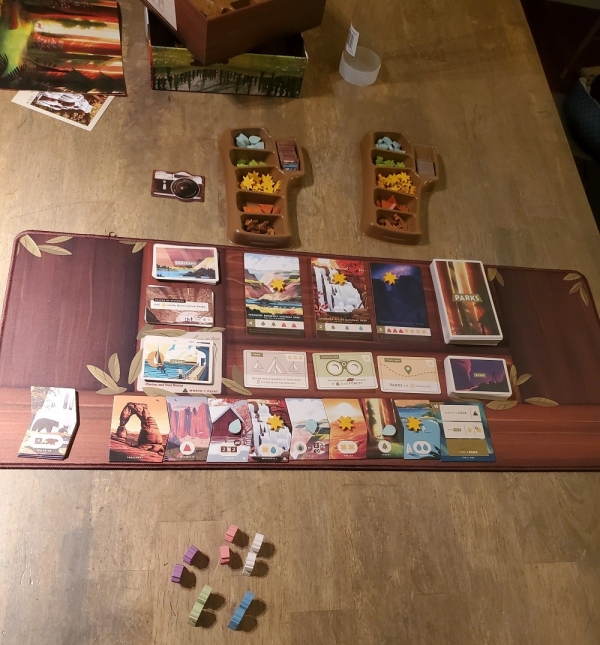 As Smokey The Bear is prone to say “This might not set the world on fire but it will probably light up plenty of game nights over the next few years.” This game is a Spiel Des Jahres contender (well, even if it isn't yet, it FEELS like a Spiel Contender) and it carries that “burden.” What I mean to say is that it has that distinctly “Family” feel. Nothing too intense, like the embodiment of the pleasant stroll along the trails of national parks. After a few treks though Parks, you start to notice a few stumbling blocks on the path.

Normally, “Secret Goal” cards (done with Year cards in Parks) give you a goal to shoot for and, usually, a nudge in a direction to get you started. However, the ones found in the Year deck, despite having two similar goals on each card, are a true pain to achieve and sometimes impossible simply because of the Park cards that come out. Take, for instance, one card that gives a two point bonus for visiting six parks with mountains or three points for visiting eight parks with mountains. Visiting eight parks in general is quite an accomplishment, getting lucky enough to be have eight parks with mountains even be available is another...and that is not even factoring in having the resources to visit them all. And, after going to all that effort it gives, what, roughly a 10% boost in total points at the end of the game? For a distinctly family friendly game, failing to even come close to your goal and, sometimes, having it lead you down a dead-end path seems counter to almost everything else Parks is doing. 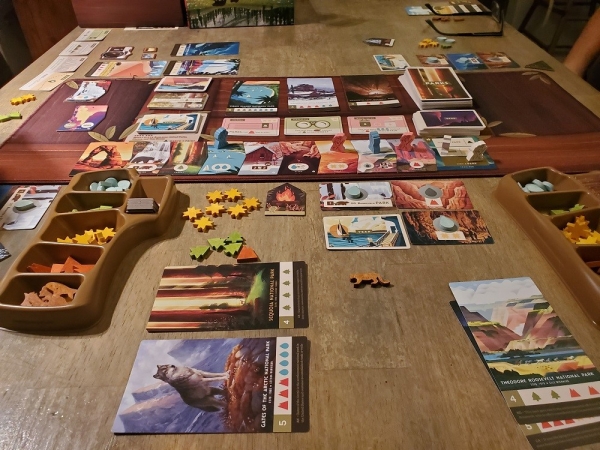 Supporting one to five players, there is a ton to love about this title and one of those things is that a donation is made to the National Park Service for each game sold. Top notch production, incredible artwork and all-around quality makes it seem destined to be a well-deserved hit.

August 27, 2019
Rating
4.0
Parks
There is a ton to love about this title and one of those things is that a donation is made to the National Park Service for each game sold. Top notch production, incredible artwork and all-around quality makes it seem destined to be a well-deserved hit.
W
WadeMonnig Top 10 Reviewer 195 reviews

There are no user reviews for this listing.
Already have an account? Log in now or Create an account
Discuss this article
Log in to comment
Posts in discussion: Parks Board Game Review: Keymaster Games is Knocking it Out of the Park(s)