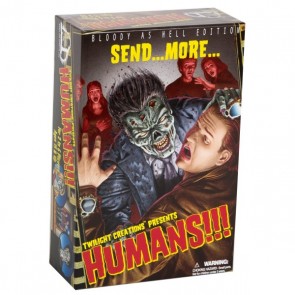 Game Name
Humans!!!
Publisher
Twilight Creations
There Will Be Games

"Yeah, I am the astro-creep,
A demolition style hell american freak - yeah
I am the crawling dead,
A phantom in a box, shadow in your head - say..."

I swore that I would never buy another game from Twilight Creations, but sometimes I swear too much.

Humans!!! is a new, stand-alone boardgame from Twilight Creations, the publisher of the Zombies!!! boardgame and a variety of other boardgames with horror themes. Humans!!! is also compatible with the Zombies!!! game and sequels, allowing players to potentially play directly against each other with intelligent zombies and violent humans.

Background: Twilight Creations burst on to the boardgaming scene in 2001 with an ambitious first game called Zombies!!! It was an impressive start, with a smallish box that was absolutely crammed with high quality components, including 100 plastic zombies, and all for just $20. And the timing was equally impressive, delivering the game at a time when zombies were on the verge of unprecedented popularity in pop culture. Less than a year later, Resident Evil, 28 Days Later, and a slew of low quality zombie movies hit theaters and video rental stores, followed by even more zombie movies over the next few years.

Unfortunately, the Zombies!!! boardgame fell short of the promise of the pretty pieces. The game did deliver the experience of a desperate struggle to survive in a city overrun by zombies, but the simple combat system seemed almost abstract. And the pace of the game tended to be sluggish, as players often seemed overwhelmed with minor choices… which card to play, where to move, and which zombies to move. And even if the original Zombies!!! wasn’t a big hit, it clearly inspired an entire generation of game designers, judging by the subsequent surge of zombie games in the industry.

I am still fond of Zombies!!!, but recognize that even most AmeriTrash gamers would rather play something else. I kept buying expansions, and couple of them even improved the overall game, but it’s still tough to get Zombies!!! on the table.

Components: Though Humans!!! retails for $35, it’s still a reasonable price for the contents. The box includes 60 plastic humans and a stack of 4” x 4” map tiles, very similar to the ones found in the Zombies!!! base set and expansions. There are also 60 zombies, ten each in six different colors. There is a deck of 40 regular size Event cards, and two decks of 40 miniature size cards, Wound and Capture. These miniature cards are about the same size as those miniature size cards that Fantasy Flight uses in many of their games. Six more cards represent the stats of the six breeds of zombies. There are also a bunch of cardboard chits representing Do-overs and Breached Barricades, plus 2 six-sided dice. In general, the artwork represents some of the best that we’ve seen from Twilight Creations, especially the brutal-looking Eat card.

Rules: Players each draw a zombie breed card. The breeds are: Cheerleader, Doctor, Lawyer, Miner, Musician and Wrestler, and each has slightly different stats. Then each player places one of their ten zombies on the Town Square tile. For the rest of the game, play proceeds clockwise around the table, with each player taking a turn made up of the following phases:

1. Draw and place a map tile.
2. Draw cards to fill your hand, up to a maximum of three cards.
3. Move zombies. Based on your zombie breed stats, you have a movement rate of four or five. This movement represents the total that all of your zombies can move each turn. So you can move one zombie four (or five) spaces, or maybe move one zombie two spaces and then move two (or three) zombies one space each.
4. Capture/Combat. More about this later.
5. (Optional) Discard a card.

Like in Zombies!!!, players can only play one card between their draw phases. Unlike Zombies!!!, players do not normally move the other playing pieces (the humans, in this case), just their own zombies. When a new map tile is placed on the table, humans and sometimes Do-over chits are placed on the tile. If it’s an unnamed map tile, a single human is placed in the center of the tile, in the street. If it’s a named map tile, like say the mortuary or the hospital, there are stats in the corner telling how many humans are inside the building, how many Do-over chits are in the building, and also the barricade value of the building. The barricade value is always a 3 or 4, and a zombie must roll at least that high to tear down barricades to create a breach in the building. These breaches are permanent, and are represented with a Breached Barricade chit.

The meat of the game is the Capture/Combat phase, and this is where Humans!!! really shines. When a zombie enters a square containing a human, it stops and attempts to capture the human, rolling at least as high as the Capture stat for its zombie breed. If a successful capture is rolled, other players have the chance to play a weapon card, allowing the human to defend himself. That player rolls for the human’s attack, and if the adjusted result is at least a four (in a friendly nod towards the Zombies!!! game), then the capture fails and the zombie’s player draws Wound cards, with the quantity based on the zombie breed.

So the zombie draws two (or three) Wound cards. If all or a majority of the Wound cards indicate a Head shot, then that zombie dies instantly. If a different body part is indicated (like Torso, or Leg), the zombie player keeps that damage card instead. If he already has that particular body part Wound card, even if from a previous combat, then this zombie just injured now dies. If there is a tie between the various Wound cards drawn, then the zombie player chooses which Wound to accept.

If the zombie succeeded in the Capture roll and the human fails to defend himself, then the zombie player draws two or three Capture cards, depending on zombie breed. If any of the cards are the Escape card, then the player to the right rolls 1d6 and moves the human that many spaces away, if possible. Otherwise, the human is either eaten or infected, depending on whether there was a majority of Eat or Infected cards drawn. The Eat card is basically a victory point, kept by the player until the end of the game. Infected humans are replaced with a zombie of the same breed as the zombie who made the capture.

Gameplay: Hand management and card flow is somewhat tactical, and CCG players will tend to excel at that aspect of the game. The movement rules reward players who spread out their zombies during the game, but swarm tactics make it easier to breach barricades and prevent humans from escaping. The weapon cards for defending humans make the game more interactive, so that players can get involved even during another player’s turn. Even the decision to Eat or to Infect is sometimes challenging. More zombies are not always advantageous, because you only have so many movement points, and zombies can be killed. And while not all zombie breeds are equal, that encourages table talk about who is a threat to win and needs to be stopped. The games tend to clock in at about one hour, except the five- and six-player games can go almost an extra hour due to the amount of potential card screwage when someone gets close to winning.

There is also a section of rules for integrating Zombies!!! and Humans!!! While sketchy in certain aspects, there is enough information for players to give it a shot, and it genuinely appears to be a fun variant for both games.

Problems: Humans!!! represents a breakthrough in quality by Twilight Creations, indicating an improvement in their playtesting process. There are some glitches in the rules, but most are easy to figure out. The components look as great as usual, though the decision to use a limited range of sickly colors for the zombies was unfortunate, because our three player game happened to use the light gray zombies, the medium gray zombies and the dark gray zombies. The color problem isn’t serious, because each zombie breed has a very distinctive pose. Also, the background colors of both the Escape and Infected cards are red, and it would have been better to make that background color for Escape green (green for go), so people could easily tell the difference across the table.

My Rating: Humans!!! is actually pretty fun to play, so I give it a F:AT rating of 4 on our 6-point scale. It’s also a must-buy for dedicated Zombies!!! players who are still looking for variants to improve that game. And I even recommend Humans!!! for aspiring zombie game designers, for the additional sculpts and map tiles found in this game.