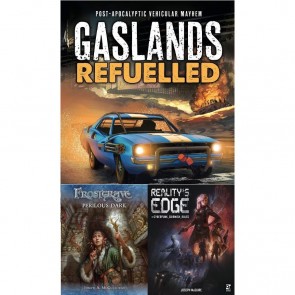 It is always a delight to get hold of a new Osprey rulebook- even when I’m looking over something that I don’t play, like Bolt Action, I still genuinely enjoy the high standard of their rules writing, graphic design, and illustrations. I think they do some of the best books in the business and I’m always impressed at the value their books offer. I appreciate that game players can pick up a great set of rules for a great tabletop game at such reasonable entry prices. I’ve got three of their recent releases queued up here so let’s have a look at what’s new.

Gaslands is one of the best miniatures rulesets on the market – it’s fast, fun, accessible, and of course it’s why every other person on your social media feeds started posting pics of Hot Wheels with spare 40k weapons glued to them. This is the premiere automobile combat game – indeed, the best game that the genre has ever seen. Mike Hutchinson’s new rulebook follows up his masterpiece with what is being billed a “1.5” version, which is appropriate as it is not really a new rulebook or a new edition of the rules. In fact, I think the ol’ classic Osprey “blue book” rules work just fine for folks just getting into the game.

However, for seasoned players looking for more of, well, just about everything this book is a goldmine. The expanded weapon lists and vehicle types (Ice Cream Truck!) alone make it worthwhile with all new options ranging from Death Rays to Blunderbusses to RC Car bombs. All of the Time Extended additions, including the War Rig rules and mini-campaign, are now part of the core rules as well as more game modes, sponsors and perks. There’s quite a lot of new rules that add a little more detail and variety, like rules for ramps in case your Gaslands games aren’t already madcap enough or if you feel like there aren’t enough cars flipping over and exploding.

It’s also now a $30 hardcover, but it totally earns the extra cost with the expanded content made available therein.  Even at that price, Gaslands can be one of the most financially approachable miniatures games available. You don’t have to customize the cars, and really any old scenery (even Lego) will do. The risk/reward mechanisms, the sheer sense of velocity and vehicular mayhem it creates, and the depth of choices available make this game immensely appealing to a wide range of players. Just like the first book, this is a five star publication for a five-star game.

Frostgrave was for many their first taste of Osprey Games’ excellent work, and Joseph McCullough’s icy fantasy skirmish has remained popular and very well supported with rumours of a 2nd edition on the horizon. But this edition isn’t’ done yet, and the newest Perilous Dark book is an excellent addition to the line. Specifically, this volume delves deep into various methods and options to play Frostgrave as a solo or co-op game.

That’s right, much like Mr. McCullough’s also excellent Rangers of Shadows Deep, Frostgrave can now be played solo or with a partner rather than as a competitive skirmish game. The focus shifts from warband-based combat with campaign elements to a more narrative storytelling adventure that leverages the simple and easy to play Frostgrave rules. I like this idea quite a lot, and I think most Frostgravers have at some point played a solo or co-op game. But now, we have this sort of “toolbox” book to help achieve a more satisfying gameplay experience. There are a lot of great tools to use in the book, too. Random dungeon generation rules, traps, expanded monster and treasure lists, and a ten game campaign that illustrates some of Mr. McCullouogh’s ideas for this type of play.

Oddly, this all sort of positions Frostgrave in comparison with other dungeoncrawlers. But versus Descent, Warhammer Quest, or some of the other choices out there this is still a somewhat simpler and more comprehensive design. As it is squarely in the tabletop miniatures game camp, it also remains more demanding of the hobbyist in terms of creating a bespoke game and that includes supplying your own models, terrain, and effort toward sculpting the game to fit your desires. If you are already a Frostgraver or if you have a good assortment of RPG figures at hand, you should be good to go. But be advised that this is very much a Frostgrave expansion and not just a solo/co-op add-on. For those not interested in those modes, the new treasures and monsters may be of some interest, but the bulk of the content focuses on them.

This is a new game, authored by Joseph McGuire and it quite a tome – over 300 pages. With some sort of Blade Runner-y cover art it’s pretty clear what we’re in for here, and I’m really impressed at how comprehensive this rulebook is. There’s tons of lore and background material – none of which is particularly novel or ingenious given the well-trodden boards of the setting and the usual referents – and a shockingly thorough, kitchen sink approach to expressing pretty much every cyberpunk theme or concept.

But one of the more interesting things is that it is almost, kinda-sorta an RPG and that makes the all-in attempt at, well, everything more sensible from a world-building and stage-setting perspective. You (the player) have an actual character called the Showrunner and you select an Operative Type (class). The class defines things like your skillset, salary, weapons, and of course stat line. Taking on JobOps (scenarios), you get paid and hire Permahires and Freelancers to your crew.. It is absolutely intended to be a campaign game and of course there are rules for permanent injuries, death, and other ongoing narrative elements to generate an ongoing story. I think it’s funny that there’s a page that asks “But, how do you win?” And it says that it’s not intended to be very competitive so it’s kind of up to you. Solo options and one-off scenarios are also really up to you – they aren’t hardcoded into these rules.

As for the game system, it’s action-point driven and based around 1D10 resolutions- it’s pretty standard skirmish stuff, played on a standard 36” by 36” table. There really isn’t much guidance in terms of scenery, table setup, or anything like that so I think this is not a very good entry point for most game players into tabletop miniatures games. If you’ve got some Infinity, Necromunda, or other cyberpunky models and some appropriate terrain, you are still going to have to do a little work to get the most out of this one. Reading through it, I’m not even really sure how you manage having “real” things on the board concurrently with virtual ones. This is some complex stuff.

This is also a game that is going to require some commitment. There is just so much to it once you factor in NPCs, weapon upgrades, animals, all of the hacking elements and on and on. I think Mr. McGuire’s aim here was to put out a definitive cyberpunk design with anything and everything within that genre more or less possible in some ways. I really admire that, especially as classic cyberpunk isn’t really something we see in games much outside of the recently canned Netrunner. This is a game that folks that came up into games with Shadowrun and Cyberpunk 2020, let alone William Gibson and Ghost in the Shell, may really be able to dig into. I think it’s quite inaccessible in a few ways that may be off-putting to modern gamers but Reality’s Edge makes a solid case for itself as THE cyberpunk miniatures game.