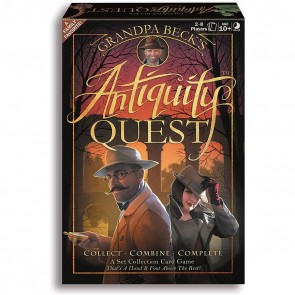 Some games just have an “Old School” feel. Antiquity Quest is one of those. And rightfully so. It is a re-imagining of Hand and Foot, a card game that I had never played before. However, looking up the original rules, it is easy to see the similarities. You have two “hands” (or, one hand and one foot) of cards: Your main 10 card hand and, once you have played those, you pick up your 10 card cache. The original Hand and Foot was limited to team play, but Antiquity Quest opens it up, supporting two to eight players including all of the odd-numbers in-between.

The game is focused around building “sets” of cards. There are six suits (a.k.a. Civilizations) of Antiquity cards along with separate Treasure Cards and a couple of Character cards. Turns consist of drawing two cards, playing as many or as few cards as you want and then discarding one card. Once you have completed your first set of cards, you are also allowed to take the discard pile instead of drawing two cards on your turn. 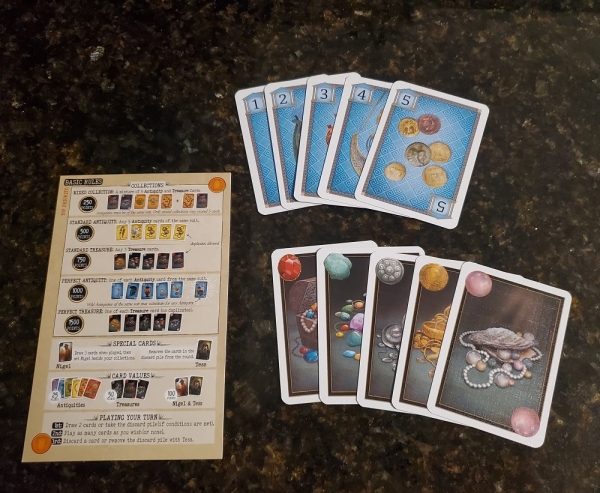 Plenty of card games thrive on passive-aggressive “Take That” mechanisms but Antiquity Quest takes that a step further. If you spot another player trying to build a “Perfect Set” of Antiquity cards (which consists of Antiquity cards numbered one through five of the same suit and is worth 1000 points), you can play a card INTO their set (Say, playing a 4 when there is already a 1 thru 4 out on the table). This duplicate reduces it to a “Standard Collection” that is only worth 500 points. Of course, you have to decide if doing so is “worth” it to your strategy. Sure, you can mess up that Perfect set but you are also giving them one of your antiquity cards, that will net them 25 points at the end of the game, and might have been used to help you complete a set. 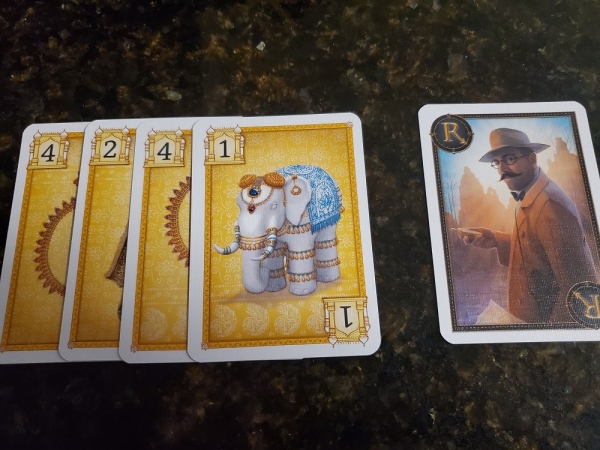 You will also be playing the Professor Nigel Remington card (fondly called Remington Steele and a variety of other names at our table) and the Tess Wynter card (who is rarely called anything fondly). Tess “Steals” the discard pile, causing the current discards to be put to the side where no one can claim them. Playing Nigel means you may/must draw three cards and he also adds 100 points to your total score at the end of the game.

I've always had an adversity to using big numbers to give you the illusion of larger “scores” at the end of the game. Maybe others enjoy being able to say they won “10,000 to 5,000” but I'd rather swap it for easier scoring and say that I won “10 to 5.” Antiquity Quest has opted for larger numbers. At the end of the game, for instance, every card you have played is worth a specific number of points (Antiquity cards are 25, Treasures are 50, Nigel is 100) along with the total points they earned in their specific “sets.” But, luckily, it isn't too much of a chore if you put your cards into stacks of 100 points when totaling up.

Additional powers are also added to the character cards in the advanced game. Nigel now allows you to trade a completed collection for another player's of the same type (to take advantage of the above rule) and Tess shows her destructive side by allowing you to destroy another player's incomplete Antiquity or mixed collection. Both card's original powers can also be used.

The advanced game also ends more abruptly, not allowing you a full final turn like in the base game, instead you can only play the cards in your hand into your own sets in the hopes of completing them (and unloading the negative points). It's enough that it will leave Grandma tittering when she is the first to go out and collect the 500 bonus points for doing so but not enough to send the kids running away from the table crying. That is because Mixed collections (worth only 250 points) let you mix Treasures into typical suited collections to complete them, and (more importantly) can exceed the typical five card limit. As long as you have uncovered your cache cards, you won't get smoked with a ton of negative points. 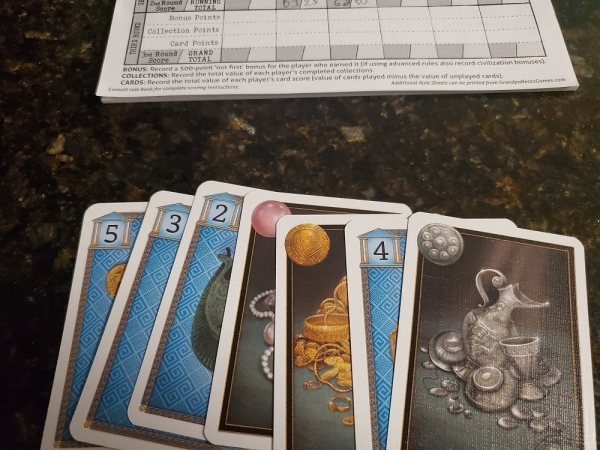 Antiquity Quest feels like a game you would play while sitting around the card table at Grandma's House while waiting for the cookies to finish baking. Heck, it even includes a Chocolate Chip Cookie recipe! But that classic feel doesn't mean it is stale, the improvements to the basic framework of Hand and Foot and the addition of an expert mode means it is just as fresh as those cookies when they come out of the oven.

October 19, 2019
Rating
3.5
Antiquity Quest
Antiquity Quest feels like a game you would play while sitting around the card table at Grandma's House while waiting for the cookies to finish baking. Heck, it even includes a Chocolate Chip Cookie recipe! But that classic feel doesn't mean it is stale, the improvements to the basic framework of Hand and Foot and the addition of an expert mode means it is just as fresh as those cookies when they come out of the oven.
W
WadeMonnig Top 10 Reviewer 195 reviews