Everything is Coming Up Roses: Bloom Town Board Game Review 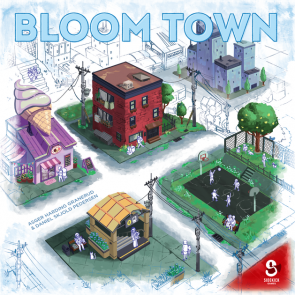 Much like Flamme Rouge, another title designed by Asger Harding Granerud, Bloomtown looks deceptively simple, possibly even that it might even be a “fluff game.” You set out to grow a small town, placing tiles and scoring points for arranging them in various configurations. But, also like Flamme Rouge, the depth is in the gameplay, even if it isn't apparent at first glance.

Each turn you are playing in the past, present and future. In the past because every previous placement has (hopefully) set you up for progressively better scoring opportunities.”Why did I place that apartment in that specific place? How was I hoping to build upon that?” In the present because whatever placement you take during this turn is going to determine what building you will be taking to play on a successive turn. If you want to take a subway tile that is currently available, you need to place in a specific “flower” space. And, of course, you are always planning for the future. Preparing for the future can be the hardest. Luck plays a hefty factor in a variety of ways. You can't count on specific tiles being available during your turn or even exactly how long before the game ends.

Community tiles are mixed in with the rest of the tiles at the beginning of the game. There are two of each type of building. During the course of the game, once both Community Tiles are revealed and set into the community area, a rescoring of that tile is triggered. Rescoring is a misnomer. It should have been called “alt-scoring.” This is because the initial scoring of many of the tiles is different than what you get once “rescoring” is triggered. For instance, Offices provide one point plus one per connecting office in that row and column. But during a “rescoring” Offices score 2 points per tile. Only Homes and Shops score the same way in both initial and rescoring. Little quirks like this give Bloomtown it's uniqueness but, at the same time, can be a bit confusing at first. Read the rules thoroughly before you begin because it is easy to make assumptions about how the game is going to play only to gloss over these rule nuances. Missing something like the Blooming Squares, that allow you to Double Bloom points or take an additional turn when covered, will have a major impact on gameplay. 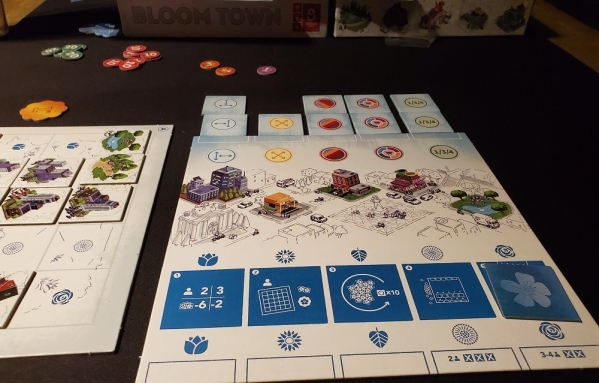 Game end also provides one more key aspect of strategy. Once the game end is triggered, you have the choice to make about the two tiles in your hand: One will simply be discarded, the other, however, will allow you to score ALL of those type of buildings again. As you watch the stacks of tiles dwindle, you have to decide if it a better idea to hold onto a specific tile and use it to rescore or if you should play it for the immediate gratification of points.

Every player also has a trump card/tile at their disposal. Once per game they can use the Bonus Token. tile on their turn. It allows you to double the score of the turn you just took or to take another turn immediately following your current one. Or, you can use it on a final way that triggers at rescoring/alt scoring of a tile type that has not yet been triggered in the game. This also stops it from being triggered later in the game. This hearkens back to the past/present/future aspect of every turn in the game. Should you take the points you just earned in the immediate past, presently take another turn or transform the future by triggering a rescoring that will impact everyone. 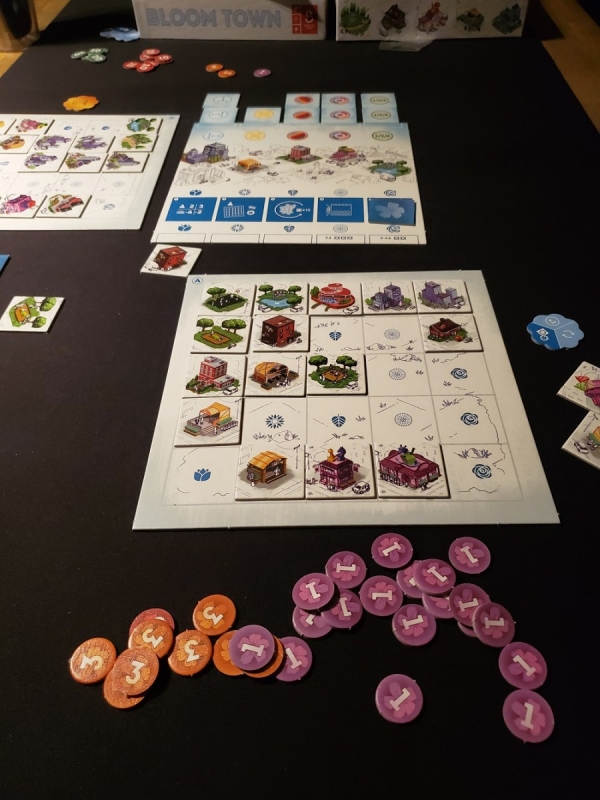 We've almost come to expect every game to have language independent icons on all cards/tiles in Board games. Bloomtown does NOT have these, instead relying on the specific building color and style identifying them. I didn't find it a huge detriment and think that the addition of icons and scoring information on the tiles would have deterred from the aesthetic of the tiles themselves. I'm willing to swap having to concentrate on what tile is what type during the first few plays for the “Aww! Look at the piggy bank on top of the bank!” moments. The artwork also has other wonderful little touches, like a statue of the Founding mother in the town square.

All isn't perfect in the berg of Bloomtown. Much like the small, quaint town you are building, if you pop out and ask the locals what they think of their town, they will tell you it can sometimes be a bit, well, boring. All the best moves you make in the game occur on your own board and even the “thrill of the build” from those is somewhat subdued. 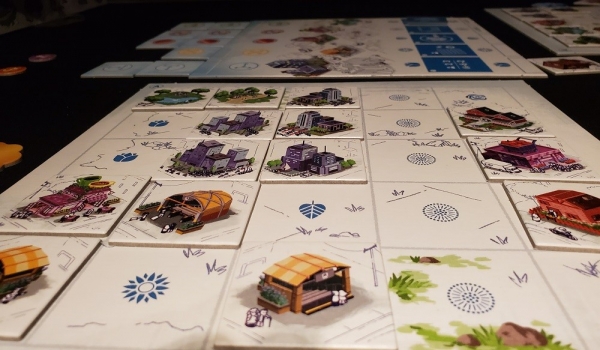 Bloomtown is a beautiful bouquet of board gaming. What initially looks like a simple arrangement blossoms into robust rose garden of opportunity upon repeated plays.

October 25, 2019
Rating
3.5
Bloomtown
Bloomtown is a beautiful bouquet of Board Gaming. What initially looks like a simple arrangement blossoms into robust rose garden of opportunity upon repeated plays.
W
WadeMonnig Top 10 Reviewer 195 reviews