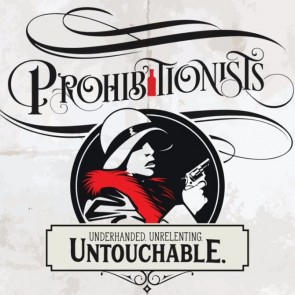 Game Name
Prohibitionists
Designer
Ed Turner
There Will Be Games

Numbers on cards, with a splash of the hard stuff.

Prohibitionists is a small box card game that aims to blend the cooperative tension of Ghost Stories with the tactical cardplay of Lost Cities. In a summary that'll likely ring some bells if you're into the genre, threats constantly flood from the deck. Your team of characters with unique powers has to handle them as quickly as possible or your tactics deck will bleed out before you even get the chance to take out the mob boss and get the devil's hooch off the streets of the ol' U S of A for good.

Leave your hopes for a richly thematic game at the door. Prohibitionists isn't really about running a pseudo-legal government funded gang, it's about cards and numbers and the application thereof. You're constantly presented with new obstacles that need to be solved quickly but also cleanly, lest you waste your best cards and not be able to finish the game before it finishes you. Turns are quick, starting with the game aggravating the situation then typically only allowing for players to place one card on an obstacle before drawing up and passing. Much like Lost Cities once you start solving a problem with a particular suit (suits being numbered 1-10 in violence, subterfuge, investigation, etc.) you're only allowed to play higher numbers that match that suit. Communication is key, lest you play yourselves into a corner and create an unsolvable problem that takes up a slot on the table for the rest of the game.

The most interesting wrinkle the game offers lies within its Overflow mechanism. In most games overpaying for something means wasted potential and regret. In Prohibitionists it can be one of the most powerful actions you can take, as your "change" can finish off other jobs that you've already started and allow you to knock out multiple obstacles in one fell swoop. Of course this typically means you've taken multiple turns to set up before the aforementioned knock, so you've likely suffered losses in the interim. Choosing when to just whittle away at problems as they come up and when to take some short term damage for long term gain is critical to success here, to the point where it'll be the main issue you argue with your allies over as you plan who to take out when. Slip a corrupt cop a small bribe, then scare him off your block by murdering a nearby thug so gruesomely that he decides to skip town.

Let me pump the brakes on the descriptive stuff real quick; I'm concerned I may be overselling it just a tad. The tension in this game is going to come entirely from the mechanisms, not the setting. Every group I played Prohibitionists with found its depiction of 19-teens America anywhere from inoffensively mild to actively misleading. The art, while very stylish in its stark black and white, doesn't do the best job depicting the jazz age. My wife was convinced that the Politician and Tax Collector characters were literally the same white guy, and there's not much for deviation within the obstacle deck either. Sometimes you get cool moments like I mentioned above, other times you bribe guard dogs with stacks of Benjamins and shoot the -concept- of organized crime with a revolver. Thematic it ain't.

I highly recommend playing with the hard mode variant that limits communication so that you can't play open-handed. On normal, Prohibitionists is essentially a collaborative puzzle that you can play with friends if you want. The game is elevated significantly when everyone's strengths and weaknesses are fuzzier. Like Hanabi, you'll need to create coded speech and adjust on the fly so your partners know the difference between "a lot of subterfuge" and "a LOT of subterfuge". The decision tree of this game branches out beautifully when you have to balance what the team obviously wants you to do with getting to use your character's ability to great effect, or spending just one more turn setting up an insane overflow play if they'll let you hang on to that ONE card for ONE more round. Come on guys, I promise you it'll be worth it, just TRUST me.

Prohibitionists is an easy recommendation to folks looking for a punchy coop that plays in half an hour tops, as well as a sharp solo game that you could easily play on an airline tray. It demands attention and offers a challenge, but not so demanding of one that you can't chat over it. Setting misses aside it still manages to distill a Ghost Stories-esque experience down to a pack of cards and lose very little in the process. As far as I'm concerned that's a win.

ubarose replied the topic: #304199 14 Nov 2019 12:45
Sounds interesting. I'm looking for a 15 minute 2 player game to play when we get to game group late and need to kill time. When is the Kickstarter scheduled to launch?