Enter My Mind To See My Thoughts On Cerebria: The Inside World 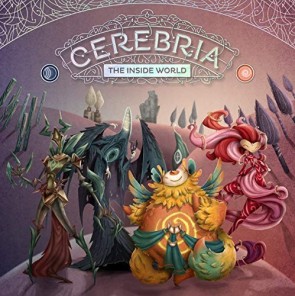 Game Name
Cerebria: The Inside World
Publisher
Mindclash Games
Designer
There Will Be Games

The first thing you think of when someone describes Cerebria is the movie Inside Out. They both take place in someone’s brain, and both have cute personifications of emotions. But that’s where the comparison stops, because one is targeted at young people and families, and the other is Cerebria.

The first thing you think of when someone describes Cerebria is the movie Inside Out. They both take place in someone’s brain, and both have cute personifications of emotions. But that’s where the comparison stops, because one is targeted at young people and families, and the other is Cerebria.

This game is damningly complex.

In October 2015, a computer program developed by DeepMind was able to beat the European Go champion. In 2019 that same program is struggling to even play a single game of Cerebria’s advanced ruleset.

And this is OK.

A lot of this review is going to be dominated by talk of complexity, but it shouldn’t be the sole factor for scaring you off. As even though we struggled to play a game on the most advanced ruleset, Cerebria allowed us to add or remove rules to make the game more aligned to our cognitive capacity.

In a way, it felt like a campaign game. We’d play a few rounds, add a few rules, play more rounds, add more rules, continue until we had a winner. Again, this sounds damning, but I enjoyed it. Knowing there was always more to add, kept the game fresh.

But that’s not to say the game isn’t exciting in and of itself. 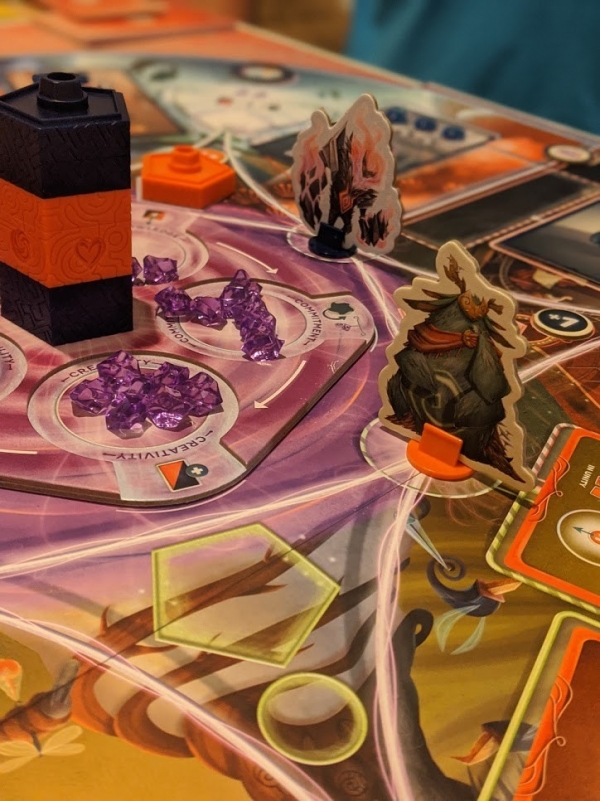 The inner brain and the things that dance around it.

Cerebria takes place inside someone’s mind and is a battle between two teams representing positive and negative thoughts. On your turn you’ll get three actions to influence the brain. There are too many ways to explain how to do this, but your goal at any time is to be winning two objectives. A public objective that everyone knows, and then a private objective that only your team is aware of. These objectives are scored and changed throughout the game. At the end, whichever team scored the most points through these objectives wins.

That doesn’t sound too complex. Does it?

Well, I didn’t even mention the main mechanic of the game – area control. Or any of the rules associated. Or the cards you’ll pick up and manage. Or the abilities on the cards. Or the eight characters, each with their own abilities and character progression.

What about now? Feels a little complex right?

But I’ve yet to mention that for each of your actions, you’ll have a choice between 10 character and board actions. Or the additional 2 free actions, not covered above. Or the alternative way to score points through fortresses. Or, and finally, the alternate way to score through intentions.

I don’t know how you’re feeling right now reading that. But to me it’s dizzying. The question for me now, is how do I unpack all of that? How does anybody? Without a large bottle of whiskey and a hundred blank pages. In lieu of both of those, I’ve given it my best shot. 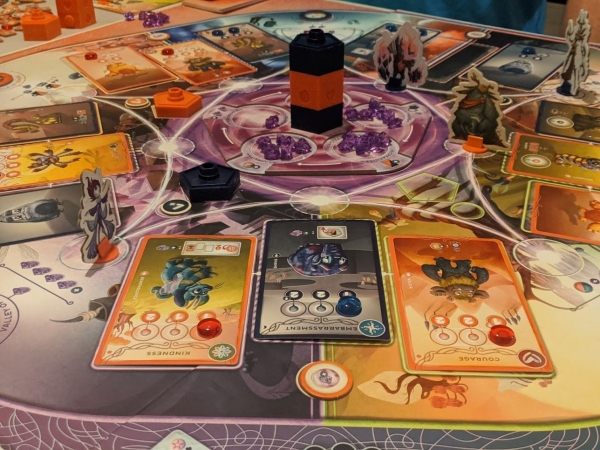 A game in play. My team The Negative Nancy's lost by one point!

If you’ve ever played a Vital Lacerda game, that’s where you should set your expectations for how Cerebria feels. If you haven’t, the way Vital designs his games are by having one simple main system. In this case: area control. And then several subsystems which all run into the main system.

I like to call this decision by distractions, and it’s a person with ADHD’s worst nightmare.

However, there are a couple of things Cerebria does to help. For instance, at any one time there are 2 objectives you need to complete. This helps you focus on what you need to do at any one moment. Reducing your possible options to just the ones that will provide an advantage. Then if you get stuck, you’re on a team. This gives you someone else who has your best interests in mind and can help you.

Which you’re going to need. As Cerebria not only gives you a smorgasbord of choices, but each choice can have massive ramifications. This makes the board game incredibly engaging, but lends itself to longer turns, and having to puzzle out and make sense of all available information.

The upshot to this is if you can pull it all together, you can perform moves that are a sight to behold. My friend had one of these moments. It was an incredible move, and such a powerful moment that the rest of the table of almost broke out into golf claps.

Despite the time it takes to make a magical moment, the game can move quite quickly. The overall pace of the game is determined by players scoring points and using the absorb ability. 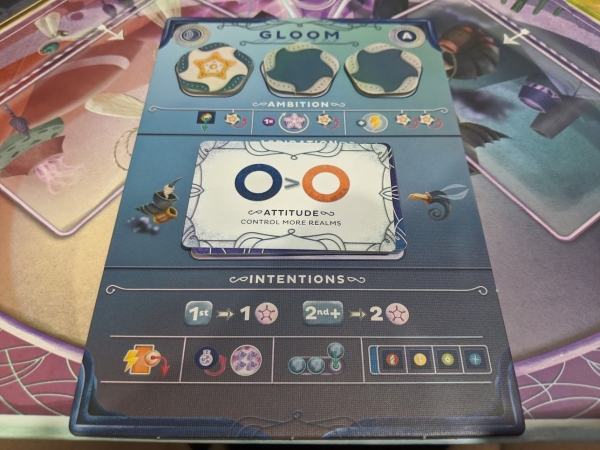 Side board. Using ambitions are one of the free actions you can take!

The theme of Cerebria is unique to these heavy games, and therefore brings with it a level of interest. And Mindclash Games has done a bloody brilliant job of integrating it into every piece of art, every icon, and every word of the game.

The downside to this tight coupling between theme and mechanics is the increase in difficulty of learning the rules. They create a lot of unfamiliar and superfluous terminology, obfuscating your understanding of the mechanics. Not normally a huge issue but due to the complexity already within the game, this additional layer wasn’t needed.

I’m going to side-track this review with a short argument on the difference between user interface design (how pleasing something is to look at) and user experience design (how easy it is to understand).

Cerebria nails the user interface design with its beautiful artwork, board, and components. It sells you the story of being inside someone’s head. But understanding how to play becomes quite difficult, as not only do you need to know the core rules, but also require an understanding of all the iconography.

An example of a game on the user experience design side of the spectrum is Terraforming Mars. The art isn’t amazing, or consistent, but they detail everything on the cards and on the map.

It’s a big deal, because while I haven’t played Terraforming Mars in months. I’m still confident that I’d be able to pull it off the shelf and play the game without the rulebook. Cerebria on the other hand, I played it last week and I’d still need the rule book to understand everything. 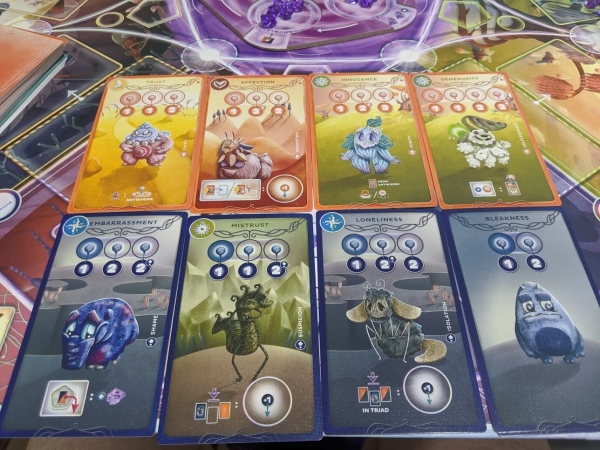 Love that art! It's so evocative. Also reminds me of pokemon...

This sidebar highlighted another sore spot: the rule book. It did a great job introducing the game, and the massive number of rules. But board game designers everywhere need to come together and agree on this one thing; if your rulebook is more than 10 pages – include an appendix.

The sidebar also highlighted one of the better parts of Cerebria as well. And that’s the components. Cerebria has a table presence. Throughout the game as objective cards are scored, you add these chunky block pieces to a central tower to represent your influence. It’s a very novel way of showing a scoreboard, feels great in the hand and is very interesting to look at. The other game piece worth mentioning is the centre brain. Contained around the outside are five pockets which you can absorb resources from throughout the game. The novel thing about this brain is that it’s a Lazy Susan, and that has direct impacts on gameplay. It’s fun, it’s flirty, and I love Mindclash Games for introducing it.

On the other hand of this table presence is the game’s size. Adding the character boards, as well as the main boards, your table needs to measure about 140x80cm for it to fit comfortably. It continues a worrying trend of sucking up space in board gaming and people with smaller tables are being shut out.

Do I recommend this game? Absolutely.

Do I recommend this game for everyone? Absolutely not.

As I said at the beginning, this game is damningly complex. Whether you even want to try this game at all depends on how much interest you have in handling this. And that’s a decision you need to make upfront, because it would be a travesty to buy this game without ever playing it.

For me, I saw that complexity as a challenge. Something to conquer, and in that spirit, I was able to enjoy the journey of learning. The reward for starting this journey was uncovering the deep and rewarding gameplay, the integrated and enjoyable theme, the tactile nature of the board, and the wonderous gaze of your friends as they watch you pull off the most incredible plays they’ve ever seen. Every time we played, I was sucked into its world for 2-3 hours. And I’d finish and wonder where the time went. It consumed me; a rare thing for games to do. And absolutely a commendation for the work that’s gone into this game.

jpat replied the topic: #305023 11 Dec 2019 13:24
Thanks for the quality review. Despite having backed Trickerion, which I consider very good, and Anachrony, which I think is even better, I thought I'd probably be instabuy for everything Mindclash, but to date I've given Cerebria a pass. I find myself drawn more to complex Euros these days than when Cerebria was offered on Kickstarter, but at the time I found Cerebria intriguing but opaque. I think I'm finding that that's a hallmark of even good complex-Euro design. Maybe I'd have a higher tolerance for it now. But while I was intrigued by the theme, I'll note, idiosyncratically, that at least back when the campaign was running I didn't want to play a game in which Gloom (one of the two opposing forces) could win. It just seemed like a real bummer.
Read More...