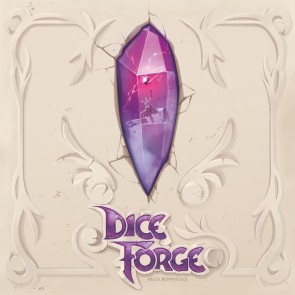 Have you ever played dungeons and dragons and wanted to change the odds of your next roll? Instead of rolling a 20-sided die, roll a die with 20 on all sides?

Well come into my dark alleyway, because I have the game for you.

Dice Forge is a dice rolling game, where you can upgrade your die by ripping off the sides you don’t like and replacing them with sides you do. To win it you’ll need to collect the most points om 9 or 10 rounds. Points can be purchased through cards and abilities or rolled with upgraded dice.

In terms of playstyle, think Machi Koro or Space Base.

You roll two dice on everyone’s turn collecting the resources shown. Then on your turn, you’re able to cash in. By buying new faces for your dice, or cards which either activate for a onetime bonus, or stick around and can be activated each turn. 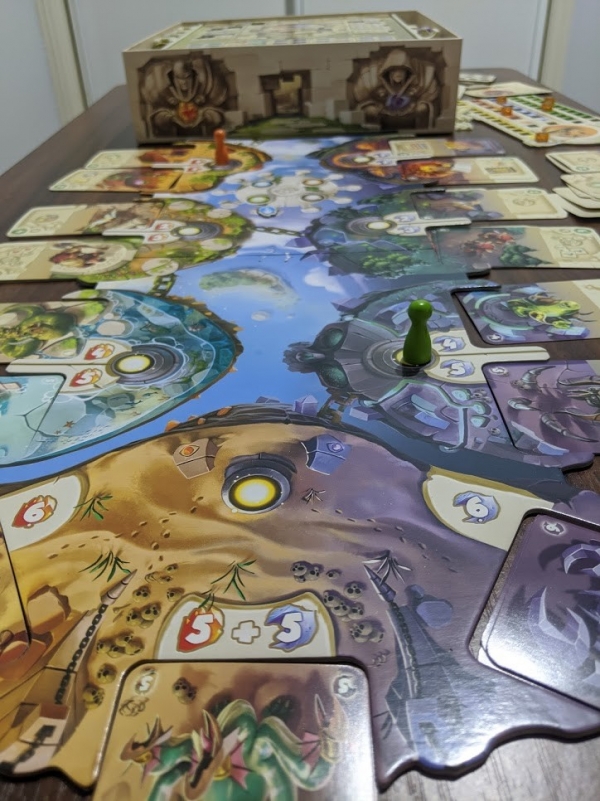 The marketplace, or island, or w/e it's called.

In terms of feel, it’s more akin to an old school deck builder.

You need to start the game with a strategy or engine already in your head, and then play out the game with only minor adjustments. Which is tougher than you think, given you’re relying on lady luck to have your back.

However, it feels this way because of the limited number of rounds. At max, you only get 10 turns of buying and activation. Making this a fantastic game to bring out with the family, but also a game that will disappoint anyone wanting a deeper experience.

Which to me, is the catastrophic failing of this game.

It’s such a disappointment to me, because there’s so much design legwork packed into branching strategies that never you never get explored because you just don’t get enough time for them to bloom.

One example was a strategy I call Triple-Mega-Points. And you’re right - I didn’t spend a long time thinking of that title. The idea was to put triple multiplier faces on one of my die, and point scoring faces on the other. In my head it was such a cool strategy. In practice, it turns out that one triple multiplier isn’t enough, as it only gives you a one in six chance. You need more; which isn’t cheap. I lost the game, badly, but I could see that given one or two turns more turns it could have been a different story. The only way I could reach that point sooner, is if I were to get lucky. 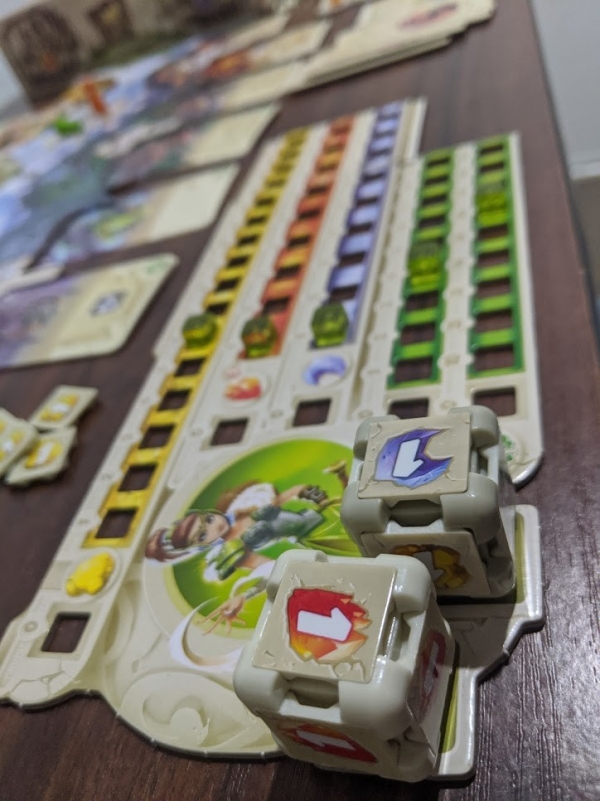 I love the use of tracks and counters. So clean!

Highlighting another problem with the shorter game time. Because you’re rolling less dice over the course of the game. The importance of each roll is increased. Making, or breaking any strategy you’ve thought of.

If this happens, and your strategy is broken because of luck, or because someone took the last card you were after. The game is too short for you to pivot or course correct. And with points open information, you could be in a position of waiting for the next game to begin. Because of this the game encourages you into having a singular strategy and focusing all your efforts towards it.

Now I’m specifically talking about competitive play here, and if you’re in the same headspace, you’ll be asking yourself the same question I did. And that’s: what is the best way to consistently gain points? Once you ask yourself this question, Dice Forge changes from having a lot of interesting strategies, to one where only a couple are viable. 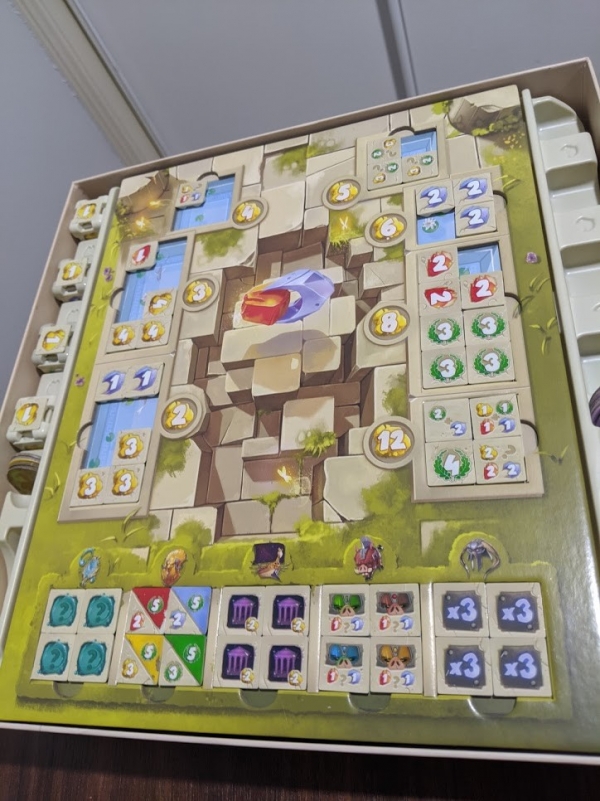 All the dice faces available.

Moving along, Dice Forge’s production is remarkable. They’ve done something I love, which is making the box part of the game. And instead of asking the players to baggie and containerize everything. They’ve done it for you. Making it a dream to setup, and store away.

Not to mention the components are beautiful to look at.

I need to give a special shout out to the card art which not only makes the game a joy to look at. But when placed correctly, blends seamlessly into the main board.

However, all that glitters isn’t gold. Perhaps it’s irony, but the worst component in Dice Forge is its core mechanic: the dice. The idea of modifying the sides of your dice is radically novel, and unlike any other game I’ve played. But a problem arises whenever someone changes their die sides. The flow of the game stops, and you’re forced to wait till they’re ready. While this doesn’t happen every turn. The difference between someone changing their dice and someone not, is the difference between driving on the autobahn and someone’s first drive in stick shift. 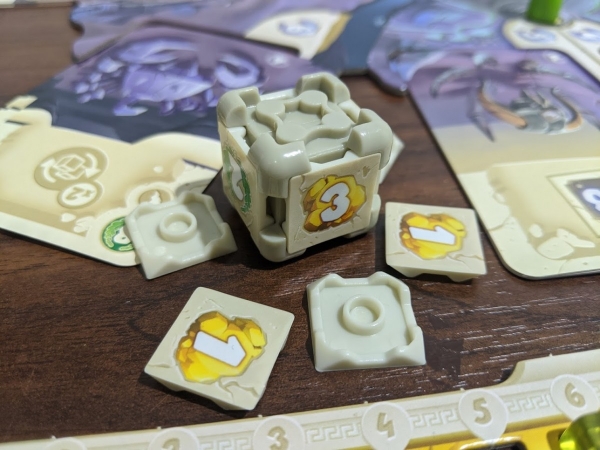 Now that I’ve said everything, where does that leave us?

Well, to a paragraph about perspective, because although for me who wants competition, I found the game to fall short. I’m not going to tell you this is a bad game. In fact, I’ll tell you just the opposite. This is a good game. And had I not played Space Base, a game I adore, I would be singing the praises of Dice Forge even with all its rough edges. So, while it’s not a game for me, I think it’ll be gangbusters for people newer to the board game scene, or those who don’t care about competition and just want to have fun.