Fingerboard! (It's not what you think!) 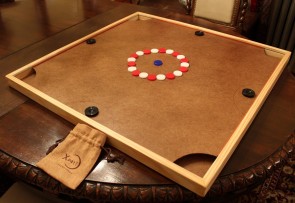 I love dexterity games, and “flicking” games in particular, so I was surprised to find that there is an old classic out there that I had never even heard of called Fingerboard.  Fingerboard, I have learned, is an old South African game first played many years ago by railroad workers who used wooden disks as playing peices, and a coin or button as the final peice (picture here as a blue disk).  The game has evolved over time and is now played on a beautiful wooden board and uses plastic disks called "coins".  The board that I played on was from Xpat Fingerboards and was framed in beautiful natural wood, with a very nice rubber “bumper” attached all along each inner side.  The slick play area seems to be made of masonite and comes with some very specific instructions for care.

Fingerboard has a simple set of rules that are really quite intuitive.  The game is basically a combination of Crokinole and Pool.  There are pockets in each corner and one team tries to sink all of the red coins while the other team tries to sink the white coins.  Like pool, there is even a blue coin, which is sometimes called the oumatjie, donkey, or decider, that needs to be sunk last in order to win the game.  Seems simple enough, but there were a number of very fun surprises.

The first surprise is in the way that you hit the red and white coins.  Each player has their own larger disc known as a “striker”.  The striker is much like the cue ball in pool as it is used to “strike” the coins into the pockets.  The differences are that you always shoot your striker from a defined half-circle area in front of each player, and in the way that the striker is propelled.  You do not “flick” the striker from behind the way you do in Crokinole, or ANY other flicking game I have ever played.  Instead, the striker has a hollowed out depression in the middle of the top.  A player puts a finger INTO the depression and then without moving any part of their arm, FLICKS the striker into play.    This was an entirely new skill to me and took some time to get used to.  I have played many times now, but still haven’t quite mastered it. Sometimes the striker goes flying off wildly in the wrong direction, but that seems to be part of the fun. 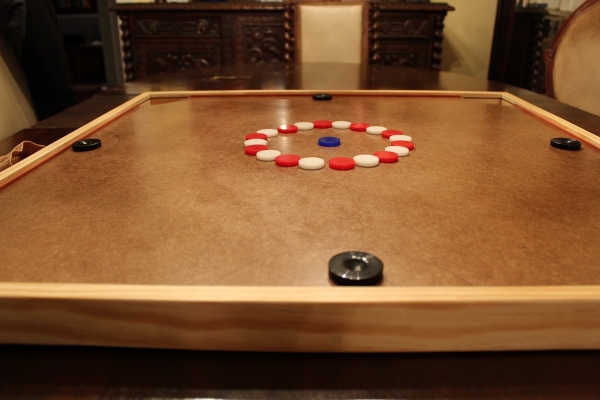 The other surprisingly fun thing about this game to me is how important good teamwork is to winning. Now, I love a good game of Crokinole.  It is one of my all-time favorite games.  But all you really want from your partner in Crokinole is good shots that score well.  Fingerboard is different because hitting coins that are far away from your striker is such a difficult thing to do.  Winning the game requires that your partner sometimes uses their turn in order to send coins over to your side so that an easy shot into one of the closer pockets is possible.  Certainly both games require strategy as well as flicking skills, but Fingerboard is much more dependent on teamwork.  The teamwork aspect of the game adds a whole new level play.  While the game states that you can play with two players, it is recommended that you play with four.  This is not only because of the added layer of teamwork, but also because without someone on each side of the board there are some very difficult shots that have to be made, and multiple misses leads to a very long game and a good deal of frustration.

I should add that while the rules were concise and easy to understand, my complete lack of familiarity with the game led to some unanswered questions.  I was able to learn more about the game by watching some videos on line of people playing, like this one:

Children playing. We were even less skilled than they are.

The children in this video are much better at the game than I am, so I guess the two player version is OK for them.  Also, they seem to know that this game is supposed to be played on the floor, rather than on a table.  Playing on the floor is difficult at my age, but seeing it played that way opened up my understanding a bit.  This game is not played like Crokinole where you are required to stay in your seat.  As a matter of fact it is important to realize that you can move around and put your body pretty much anywhere you want as long as you still start your shots from the designated area.  This makes shots to the side pockets much more possible.

After figuring out how to play correctly I was excited to try this game with some friends.  I had a couple of different groups including my board gaming friends and my band-mates try it out.  Every single play was a huge amount of fun with players laughing and swearing and intensely trying to make that perfect shot to the side.  We played on a table, but eventually got rid of the chairs since they just got in the way.  Every group I played with played multiple times.  This game really is too much fun to play just once and then put away.  We couldn’t help but laugh at ourselves and at each other as shots went shooting off in ridiculous directions or went bouncing crazily off of the rubber bumpers.  Personally, I enjoyed how bad I was at this new form of flicking as it kind of “leveled the playing table” when playing against folks who do not have the same ridiculous amount of Crokinole playing experience as I do.  Everybody seemed to start at about the same level of skill, though we all got a bit better the more we played.  Once we figured out that we did not have to stay in our chairs while playing, EVERYBODY became much better at the game.

Now be forewarned, this is not a cheap game.  They look to be on sale right now for a little over $100, but usually sell for about $120.  Not cheap, but not out of line at all in a world where many board games cost well over $100, with Kickstarter pledges verging on the ridiculous.  In this case you get a well-made high quality game made of real wood.  The board is not at the level of quality of the high end Crokinole boards, but it is also about a third of the price.  I found this to be a highly enjoyable, family friendly, fast and engaging game that brought a new and interesting challenge to the world of “flick”.

Skilled players on a waxed board.

December 18, 2019
Rating
4.0
South African Fingerboard
This game really is too much fun to play just once and then put away.
EA
engineer Al Top 100 Reviewer 2 reviews

I think it particularity shines with team play. Unlike Crokinole, when you play teams, you aren't always trying to make that sweet shot on your own every time. Instead you can set shots up for each other, or block an opponent's shot, or knock an opponent's coin out of a sweet position. I feel like there is a lot more going on than just trying to shoot coins into the pockets.

Plus, making rebound shots off those bumpers is sweet.

engineer Al replied the topic: #305304 19 Dec 2019 18:58
Well, if you do a search for fingerboard, you get pictures of those tiny skateboards being pushed around with a finger. Whenever I mention the name to friends they ask about tiny skateboards...

WadeMonnig wrote: Wait, if it is not what I was thinking, what was I thinking? I'm curious.

According to wikipedia this is a variant of Carrom.

ChristopherMD wrote: According to wikipedia this is a variant of Carrom.

Yeah, I poked the Board Game Barrage folks with this article, as one of them is South African. And yes, he said he's never heard it called "Fingerboard" but that he's played a lot of Carrom. I must say, this looks far more fun then Crokinole, but I doubt I'd have a opponents for this one.

moofrank replied the topic: #305338 20 Dec 2019 10:42
It is definitely a Carrom variant, although the strikers, the fixed location for the striker shots, and the final blue discs are different.

Carrom also has a few variants in structure. Older North American sets use small cues to hit the discs, and proper Indian sets have holes which are just a few millimeters larger than the discs. Watch a video of a high-level Carrom tournament and be terrified.

This does look nice, however, and FAR more playable.

moofrank wrote: It is definitely a Carrom variant, although the strikers, the fixed location for the striker shots, and the final blue discs are different.

Also, I think, the rubber bumpers make it different. At least I have never seen a Carrom board with rubber bumpers. Because of the fixed location for the striker, you have to learn how to used those bumpers.
Read More...