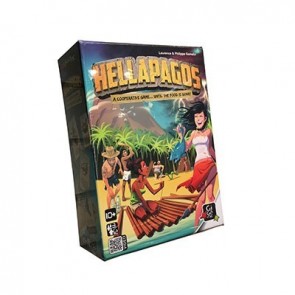 I wonder what the search party thought when they stumbled upon six fully made rafts. I wonder what they made of the four bodies ravaged by bullets. Or how they dealt with seeing the last two almost-survivors who died of starvation actually sitting on the rafts, hoping to push off and seek rescue. Holy shit, that sounds so dark when you type it out. How in the world can a game that can cause you to make such horrible decisions and that can end so bleakly generate so much laughter and be, well, fun?

Just sit right back and you’ll hear a tale, a tale of a fateful trip. That started from this tropic port, and ended when you pulled the black fish. Each game of Hellapagos begins the same: You are stranded on an Island. A Hurricane is approaching. You need to build one raft for every player while keeping yourselves alive and stowing away enough food and water for the trip. You can leave any time you have enough rafts and provisions but you have to be prepared to leave by the time the hurricane arrives.

Every player’s turn is simple: You can choose to Gather Water (how much you secure is based on the current weather card in play), Go Fishing (Pull a fish ball from the bag with either a one fish, two fish or three fish/a.k.a.the black ball) or hunt for wood to help build a raft (Either taking the basic one wood found on the edge of the jungle or risking a snake bite by putting a number on how many other pieces of wood you would like to attempt to gather and pull that number of fish from that same bag, only this time the black fish means you are bitten and poisoned). Or you can swim out to the wreckage and search for something useful (which allows you to draw an item card).

The item cards are the lynchpin to Hellapagos. At the start of the game every player is dealt a number of cards (depending on the number of players). The cards will give you items that range from the indispensable (such as the Fishing Pole, which allows you to draw two fish balls from the bag instead of the normal one fish ball.) to the Useless (a pair of underwear) to the morally tempting (a gun). What you want to do is make yourself a kind, contributing member of the group. Okay, maybe that is your first thought, but what you REALLY want to do is make yourself irreplaceable to the group. Sure, having the flask and being able to do the gather twice as much water as anyone else sure feels good. But, maybe more importantly, you are keeping that flask close to the vest and any stray bullets would render it useless. It’s a bit of insurance...life insurance in this case.

But it isn’t just the luck of the draw that sets up the game. You can trade or deal cards at any time. The gun is a tempting card but it is useless without bullets. But Nothing is stopping you from flipping a bullet card to your friend and saying “Shoot anyone...except me.” And nothing is stopping him from nodding politely, picking up the bullet and promptly shooting you. No deals are binding, no trades are off-limits, and prepared to be shocked by how much your “Hellapagos” life ISN’T worth to your friends.

The final hurdle that the survivors have to leap over is that you not only need supplies for the last day on the island but also enough items for the trip (one additional day of food and water). Some players will horde water or food with their facedown cards, revealing them only to save themselves if they are voted off. Others will throw them in for the good of the group, hoping to have enough to push off from the island and make their way to safety.

Hellapagos says it’s a cooperative game...until the food runs out. This is mostly true except that even in what could be considered a perfect storm game: where one survivor had the fishing pole (double fish), another with the flask (double water) and a final one toting the axe (and extra piece of wood when searching), we were still forced to leave someone on the island in order for the other five players to escape. My point is that the food almost always runs out...or the water...or there is not enough lumber. So, much of the game can be about who gets sacrificed. Sometimes the choice is justifiable (in your eyes), you vote for the one person who just kept selfishly making trips out to the wreckage.Sure, they said they were trying to get the Axe to help build rafts but did you really believe them? Other times, it’s the person who is currently poisoned while pushing their luck to get those last few pieces of wood to finish the raft. Thank you for your sacrifice, don’t mind us stepping over your body.

We all shared that look of shame after voting that someone be cut out due to lack of food...then playing a cannibalism card to turn them into rations for our escape.We all decided it is what they would have wanted...despite their protests to the contrary. Hellapagos might not always give that “We did it!” satisfaction of conquering a co-op but the “I made it out alive!” moments are even more memorable.

I remember watching a Danzig home video where Glenn Danzig quoted Friedrich Nietzsche as saying “Man is beast and his morals are relative to his needs.” I've never been able to confirm Nietzsche ever said it but it does have a nice ring to it and Hellapagos certainly gives you the chance to learn if that is true about your friends and family. Hopefully, you last just as long on the island as it took me to figure out the Galapagos/Hellapagos wordplay in this title. If not, feel free to join me with the recently deceased and morally corrupt in the region of Heckipelago.

December 31, 2019
Rating
4.0
Hellapagos
We all shared that look of shame after voting that someone be cut out due to lack of food...then playing a cannibalism card to turn them into rations for our escape.We all decided it is what they would have wanted...despite their protests to the contrary. Hellapagos might not always give that “We did it!” satisfaction of conquering a co-op but the “I made it out alive!” moments are even more memorable.
W
WadeMonnig Top 10 Reviewer 195 reviews

On the one hand, I feel a bit guilty because killing off all the young people is not how a good mom should behave.

But on the other hand, "Pwnd!"

charlest replied the topic: #306743 29 Jan 2020 13:56
One of my fondest memories is of a Max player count game where my buddy tried to shoot the youngest kid at the table (9 year old) but he blocked it with the metal sheet. We then let the attempted murderer starve to death.

ubarose wrote: I know a lot of people love Hellapagos, but the last time I played I had to kill all the children to win, and now I have ambivalence.

On the one hand, I feel a bit guilty because killing off all the young people is not how a good mom should behave.

But on the other hand, "Pwnd!"

You'll feel less guilty the next time you play with them and they spitefully revenge murder you even if it means they lose they game, I promise. It's a good game for nursing grudges and exacting sweet sweet revenge.

Road Judge replied the topic: #306874 05 Feb 2020 21:12
It would be interesting to start a game day with this game and then see the results spill over into the other games played that night.

I like the length of this game. I've played Lifeboats and it takes too long and just not that fun. This one sounds much more appealing.
Read More...