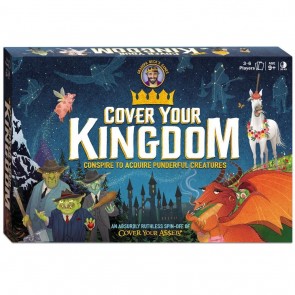 A vicious, fun, mean, family game...kind of rolls off the tongue, huh?

Cover Your Kingdom is about Magical Kingdoms that are lacking, well, magic. What they need are mythical creatures to move in and spread their magic, like pixie dust, across the land. This is done simply enough: Create a clan by placing two alike creature cards together. You can do this from your starting hand of six cards or one card from your hand and one from the discard pile. Once you have started a clan, you can add like monsters to the group, one at a time, as one of the two actions on your turn. Sounds all “happily ever after”, right? Well,the leaders of the other equally magic starved kingdoms are looking to lure your clans over to their kingdoms. They can simply play a card matching the type of clan in an effort to entice them away. You can block this by playing another matching creature card or one of the super-magical wild creatures. Win or lose, these cards are added to the clan, making it both more magically delicious and more enticing for others to attempt to steal...err...lure away. 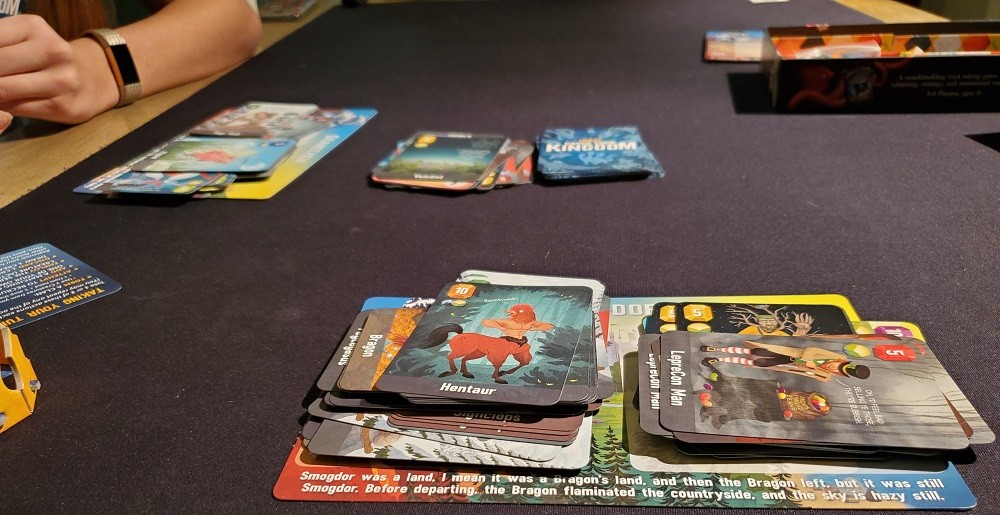 One of the key aspects of the game is that you want to quickly “cover” your point/magic heavy clans so that other players can not snag them. A clan must be on the top of one of your two stacks (The Grasslands or the Mountains) in order for someone to try to pilfer them. Slipping a new, weaker clan on top of them “Covers” them from any attempt to take them. Of course, there are cards in the deck that let other players subvert this. For instance, one lets players move your bottommost clan to the top. One of the best parts of the game is just how varied strategies can be: You can spend turn after turn trying to lure another player's powerful clan away.. Or you can hold cards in your hand hoping someone does attempt to lure your clan away, letting you add their cards (and the additional magic) to your clan if they fail. 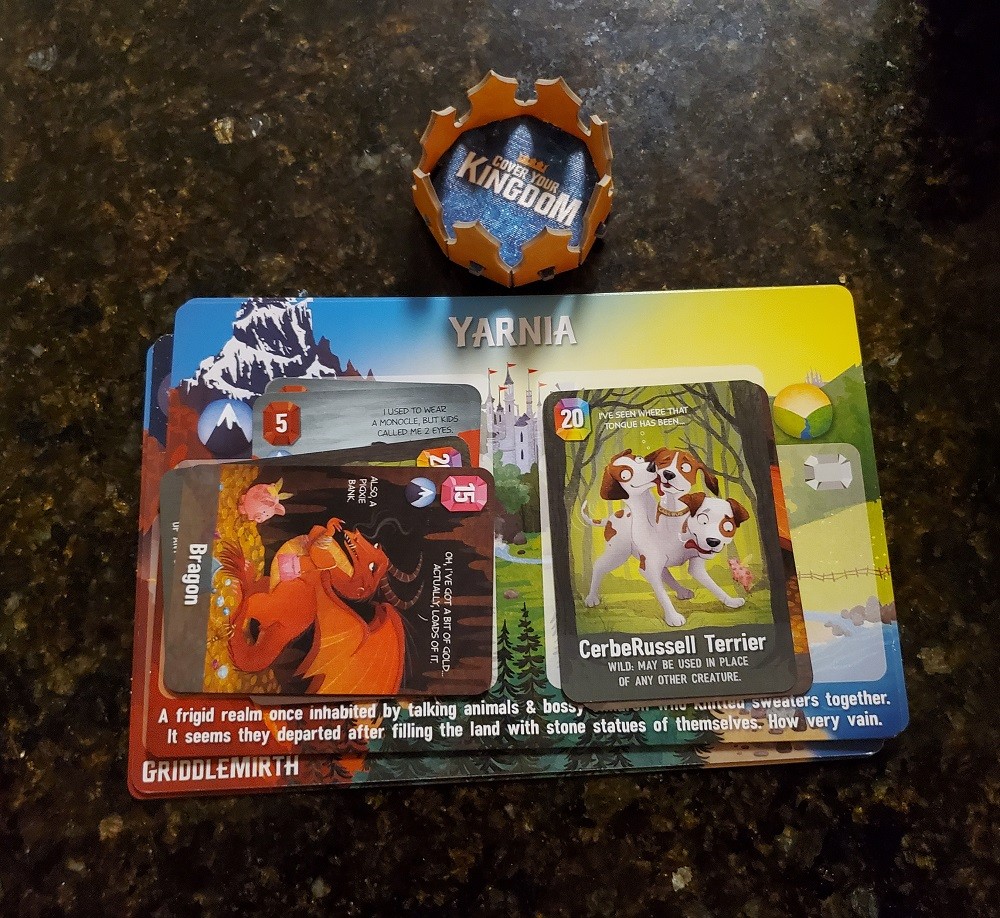 One of the other actions you can take on your turn is to simply discard a card and draw another, allowing you to attempt to cycle in fresh cards that will further your agenda. You can also tip the poisoned apple cart by playing the Action cards that allow you to freeze another player on their turn or draw three cards from their hand and replace them with three cards from yours. Despite all the interaction between players, there are safeguards in place that keep everyone in the game (like not letting you remove a player’s only clan). You do play through the entire deck of cards, so you will start to worry if you haven’t seen some of the sneakier cards come out in play early in the game (and breathe a sigh of relief if you see them discarded, and never activated, in order to try to get cards that are more beneficial).

While the creatures in Cover Your Kingdom are mythological, you definitely wouldn’t call them “High Fantasy.” Everything is done tongue-in-cheek and the puns are cringe-tastic (Double checks to make sure they didn’t actually use “cringetastic” in the game…..Okay, I’m in the clear). They almost make Munchkin’s puns look edgy. Creatures like the Emo “Sigh-Clops”, the shady “Leper-con-men”, and the mandatory (slightly off) Unicorns. Most of the cards have tiny differences to them, be it the quote or a change to the images. It’s cute and it gives players something to look for...and they are usually rewarded with another awful pun.It’s lighthearted enough as you are gathering goofy characters into clans and swapping them back and forth and it just “feels better' than amassing material things like those in Cover your Assets. The “Finish with the most magical kingdom!” win condition certainly sounds more fun than “Whoever dies with the most toys, wins!” Sure, there is a ton of "Take That" in the game but it is so prevelent, it doesn't really feel personal...most of the time. 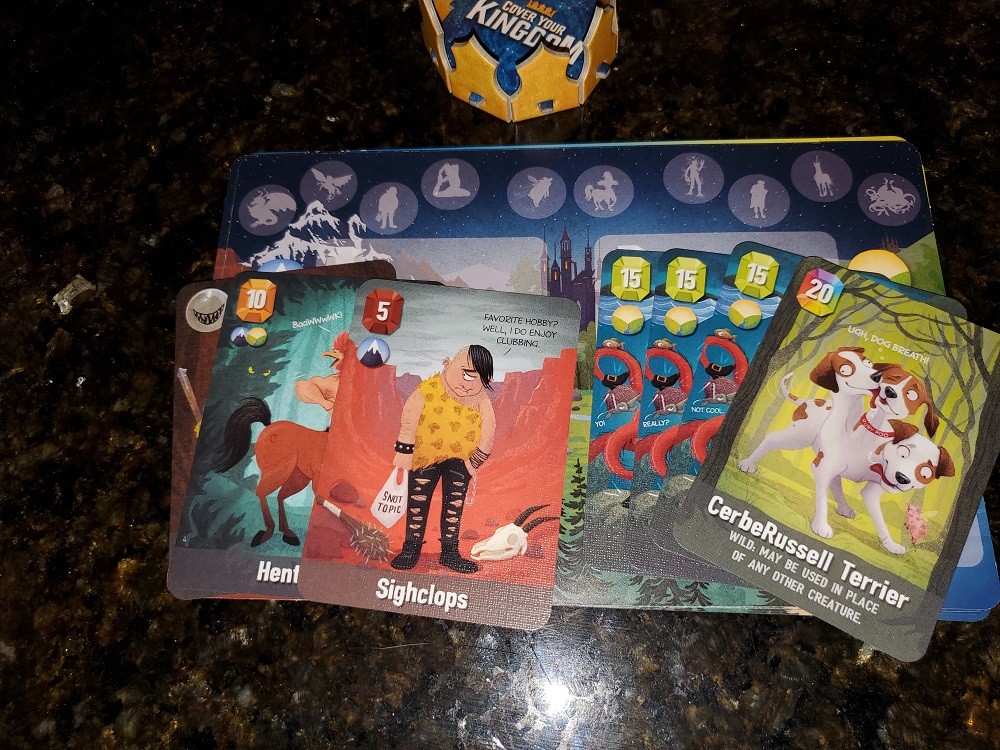 What starts as a basic retheming of Cover your Assets (I think we may have found the ground zero for where all these puns come from) becomes an enhanced version if you choose to break out the advanced variants. And the pun doesn’t stop there, even the advanced portion is riddled with silliness.(For a hint of this-one of the advanced rules is called the "Constellation prize.")

Like the other Grandpa Beck’s Games that I have played, they are upgraded versions of classic card games. Which means they are virtually perfect for pulling out in a family setting but they also add those slight steps “up” in “gaminess” that makes them more appealing for veteran gamers. You bring it out, teach the basic game to everyone and you can sneakily add in other rules if you are looking for that something extra. Expect to hear comments like “I HATE this game….let’s play it again.” This is my favorite Grandpa Beck game to date. It is family friendly while not requiring you to be friendly to your family.

January 16, 2020
Rating
4.0
Cover Your Kingdom
You bring it out, teach the basic game to everyone and you can sneakily add in other rules if you are looking for that something extra. Expect to hear comments like “I HATE this game….let’s play it again.” This is my favorite Grandpa Beck game to date. It is family friendly while not requiring you to be friendly to your family.

Jackwraith replied the topic: #306483 22 Jan 2020 09:29
Cool. Sounds like another decent "group" game, like For Sale!, which I was introduced to over the weekend. I'm interested to know details on more of the "advanced" rules, though. Now that people know the game, would you always add them in? (I feel like Jules in the car: "Example?" "Alright, you can walk into a movie theater in Amsterdam and buy a beer.")

WadeMonnig replied the topic: #306486 22 Jan 2020 10:18
Would I always add them in? No. Sometimes you just want the basic sit and chat version. In this case I think the added rules are something you add if someone wants more strategy or silliness.
Read More...