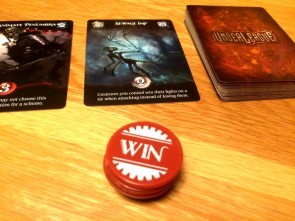 Your stable is ready. You've chosen three creatures from your selection of 30. There are the Chill Wraith, the Stasis Golem and the Skinling. You know that some of them will lose and some will win, which is fine. In fact, it's what you're betting on happening, because if you win your bet, irrespective of whether the creature wins or loses, it will give you a strategic advantage in the next round of combat. You also have a few trumps up your sleeves. The Iron Tusks, which you have kept back for now, will make one of the creatures even stronger, and you have pulled some strings behind the scenes, so you know that you can fix one of the matches in your favour. You are confident that you will come out on top in Underleague by Cogwright Games.

The theme of this game is a mix of steampunk, fantasy and horror. It's clearly a dystopian world where ruthless people control a stable of creatures and pit them against other players' creatures in combat after combat, not the death and not even for victory, but to match however you decided to bet the battle would end - win or lose. The betting phase in this game is actually what really brings it to life for me and makes it stand out from other games in the genre.

Here isn't the usual card battling game, where you buy equipment to make your fighters stronger or better protected. It's not a matter of building your deck, adding cards that have more power while weeding out cards that slow you down - even though there is a small element of this in Underleague as well, but I get to that later.

Instead, here is a card battling game where a weaker creature is not necessarily to your disadvantage. You can bet on it to lose its fight, because winning your bets is what gives you more strategy cards, as they're called in the game, in the next round. These strategy cards represent equipment that you can assign to creatures, or so-called schemes, which are basically like actions that can break the rules in a number of ways and therefore give you a last-minute chance to change things. So if you bet well and choose your battles wisely, you can be stronger in the next round, even if your creatures end up losing all their battles.

There is more though. All strategy cards can affect yourself, as well as others. Equipment cards in particular can be played on your own or an opponent's creatures. So you may intentionally weaken one of your own creatures to ensure it loses the battle, or buff an opponents creature, because you bet on it winning its battle, while everyone else bet on it losing. So as the combat round proceeds from player to player, a creature's equipment make-up can change over time, which can potentially change the outcome of battles completely.

Yet, you do want to win battles, because that's what gives you victory points, and it's only when someone has at least 20 points at the beginning of a round, that the game ends. The value of the creatures in your stable, which basically means your active creatures, plus any modifiers that the equipment of those creatures apply, also count to your victory point total. Of course, creatures that are powerful in combat have a lower value, so you do need to make sure they win their battles, while weaker creatures are worth more victory points, meaning that you can push towards victory by having three weak creatures in your stable with a lot of equipment attached to them, which can give you a large chunk of the required 20 points.

Underleague seems a bit complex to learn, but it all makes sense very quickly as you start playing. If you're used to card battling games, you will quickly feel at home. The game encourages a lot of table talk, secret scheming and clever play to ensure you manoeuvre yourself into a winning position. The game length seems quite long, but it will depend on how many of you there are and how much thinking time everyone needs. It's going to be important everyone plans their next turn as soon as they have finished their own, so they have time to think things through while other players have their go.

One thing I haven't mentioned so far are the dice. Battles are decided using dice rolls, which many people don't like. However, there are cards and creature abilities that allow you to mitigate the randomness of dice or even remove the chance altogether, by fixing the outcome of a battle. So I felt the randomness of the dice rolls was not an issue. In fact, it created many memorable moments when the dice just went against someone and all seemed lost, only for the result to be changed by a cleverly played strategy card.

So I am really looking forward to playing Underleague again. Cogwright Games have done a great job. You can see in my unboxing video that the components are really good and the artwork is wonderful. I would recommend you take a closer look at Underleague, if you love card battling games.