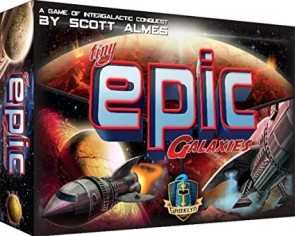 *Said in a sing-song sarcastic voice * I’m going to follow that action.

Welcome to “Extra Credit Critic.” During this time of Shelter in Place, amit cries of “I'm Bored” and “I'm Bored (read: anxious and filled with anxiety)” We thought it would might be fun/interesting/a good home school exercise to have some of our younger readers (a.k.a. our spawn) write up a review of some of thier favorite games. So, with an assist from myself, let me introduce you to Tegan Monnig, my 16 year old daughter and her thoughts on Tiny Epic Galaxies.

Wade: (To my daughter Tegan) Teegs, this is TEGs, TEGs this is Teegs.

Tegan: You...just introduced me to a Board Game…

Wade: But Teegs, this is TEGs. The readers need to know I’m also this strange in real life. A few months ago I (literally) introduced my 16 yr old daughter to Tiny Epic Galaxies.All of my family members are real troopers, they will play any game with me at least a couple of times. But when one really clicks, it gets added into our Game Night rotation. Tiny Epic Galaxies has not only been added to Game Night but also to the “We’ve got about a half hour before dinner, Would you like to colonize some planets?” rotation.

Wade: Being both Tiny and Epic is kind of a big promise but TEG fills those space boots.

Tegan: ...So do I! I wear a size twelve in womens, translating to a size ten in mens.

Wade: ...It is Tiny enough to take/play almost anywhere, it is also Epic enough to stand with games that are 10x its physical size...

Tegan: ...Yet another similarity we have in common.

Wade: As is the family trait of interrupting. You interrupt me almost as much as I do myself in reviews...and that is saying something (Kidding Tegan!). I think one of the keys of getting this to the table so frequently is that, in addition to the short playing time, it plays well at two-players. And, it still sings when you expand the player count all the way to its maximum of five players.

Tegan: Playing two players is more fun in my honest opinion, (opposed to my un-honest opinion? I never got that saying) it is much easier to strategize and define who to attack with various cards such as “Take a player down one step on their journey to colonize a planet”.

Wade: Let’s be truthful, no matter the player count, it is always “Let’s Attack Dad.”

Tegan: Wade/Dad is always the villian to everyone. He teaches the games, meaning he knows all the games inside and out. Subsequently, we all do whatever it takes to negatively impact Wade.

Wade: Meanwhile, back at the ranch - There are a two resources you can bank: Energy and Culture. Besides being used to upgrade your empire, Energy also functions to let you re-roll all of your dice. Culture, in my humble opinion the more interesting of the two, allows you to “Follow” another player's actions.If another player takes any action on their turn, you can spend Culture to “Follow” that action, allowing you to take it as well. The Follow action is a perfect way to keep players engaged when it is not their turn. Granted, you do need to have culture banked away to Follow another player’s move but, even when you lack the Culture, you play that “Would have/Could have” game in your head.

Tegan: This action is exactly how Wade mooches off others good luck to make up for his ability to only roll everything he DOESN'T need.

Wade: Excuse me Miss, but I do believe that we all have that exact.same.ability. Not only is it a game of “What is my best possible actions with these dice” but also “What is my best move that I know an opposing player won’t want to follow”. If moving a ship up on an Economy based planet is going to allow another player to do the same, and colonize that planet on your turn, maybe that isn’t the best move for the Empire. And it seems like there are plenty of two-pronged decisions to be made throughout the game: Should you Colonize a planet simply because you want exclusive access to that planet's power? Or Should you do it just to deprive someone else of that power?

Wade: My advice to players is always: Grow your empire and grow it fast. The bigger you get, the more dice you may roll and the more ships you send out into the Tiny, Epic Black.

Tegan: In my opinion, less is more. It gives less oppoutinity to moochers.

Wade: You are required to announce your VP at the end of each of your turns, which I actually love. It eliminates that “Oh, I didn’t realize you were close to winning” comments when someone hits 21 points. And since players state their exact point total, you can scheme to block them from the easier planet points that would push them over the finish line.

Tegan: At the beginning of the game, you receive a “secret mission” that can earn you a few points, if completed, at the end. Finding a way to both complete the card, as well as winning the race to 21 seems to be my biggest fault. Once nearing the end game, if you and an opponent are close, making sure you are getting those points becomes essential.

Wade: It is an easy to teach game, taking only a few minutes to explain all the actions but it is a few steps up from a Gateway game. My daugher, Piper, Grokked it quickly, but she usually does so with board games, and won her first game. (Probally because Teegs was picking on Daddy).

Wade: What's your favorite part of the game, Teegs?

Tegan: My favororite thing about TEGs is the length of time it takes to play, as well as the acceptable amount of stategy used. The game is built around the dice and the powers obtained by the planets. Although luck is a primary factor, it is able to be easily manipulated with rerolls and energy. Powers obtained can range from helping you to the destruction of others. This can fluxuate the length of the game, adding to the excitement of it. The planet drawings are pretty cool too!!!

Wade: Destruction of others?!? You make it sound like you can nuke them from orbit...probally the only way to be sure, honestly. I'm kidding (again), It is more the detriment of others. I like this game for all the same reasons that you do. I also appreciate the “convertor” option that lets you put two dice into the convertor and, then, convert the face of a third die into any side you want. Granted, I also have a problem pulling the trigger on this because at that point in the game when I would feel there was an advantge using it, I'd rather opt to spend the energy for a re-roll (but I appreciate it as a luck midagation mechanic).

...and here is where we break off from the conversation aspect of the review because Tegan became a bit hung up on how many stars to give Tiny Epic Galaxies. This lead us down a rabbit hole of ratings/scores, how we have a specific star rating guide at Therewillbe.games, and ended up with a trip over to BoardGameGeek. After a review of the top 100 games, she stated she was officially opting out of the "Board Game Community." (Proud Dad Moment). For the record, she rated Tiny Epic Galaxies a 4.5 and I agree with her...just maybe not for the reasons SHE gave it a 4.5 stars. But, hey, like she said, I think about board games way too deeply.


Extra Credit Critic features board game reviews and articles written by students (under 18) and published with permission from the student's parent(s).

Please show your support for these young writers and board gamers by leaving age appropriate comments.

Extra Credit Critic features board game reviews and articles written by students (under 18) and published with permission from the student's parent(s).
Please show your support for these young writers and board gamers by leaving age appropriate comments.

WadeMonnig replied the topic: #309500 22 Apr 2020 01:56
Despite how it may appear, there has not been a hostile Tiny Epic takeover of TWBG. Tegan just happened to pick TEG as her first review.