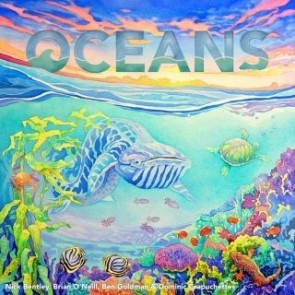 The world is full of diverse life from plants growing atop the highest mountain to creatures living in the depths of the ocean trenches of the planet. The ocean covers 70% of the planet, but remains mostly unexplored. According to the U.S. National Ocean service more than 80% of the waters of the world remain unexplored. There are still secrets to be discovered, creatures to meet, biomes to be researched. Oceans is a game that invites you into the deep, to guide the evolution of species, moulding filter feeders, scavengers, and predators into the best they can be. Given the power to create, what will you imagine?

Evolution, it’s what you need

Oceans is a spin-off of the Evolution series from North Star Games and designers Nick Bentley, Dominic Crapuchettes, Ben Goldman, and Brian O’Neill. The absolutely fantastic art is from Guilliaume Decos and Catherine Hamilton. I have not played Evolution but as I understand it Oceans follows the formula to an extent.

In the beginning there was nothing, apart from a large deck of cards, a bunch of fish counters (called population in the game) and some bits of cardboard. Then the players arrive and bring life to these mundane components, creating species to feast on the bounteous fish, and each other. 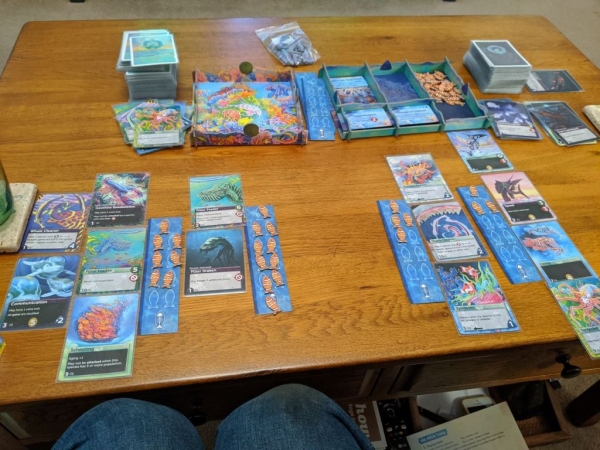 Looks pretty, but is it only on the surface or does it have hidden depths?

A simple hand of cards is all the godly power you need to breathe life into the aquatic species you will create. Each beautifully illustrated card is a single trait that you can imbue your creation with: Filter Feeder, Apex Predator, Transparent etc. Each trait twists the rules, allowing you to create a unique ocean dweller.

When you start out playing Oceans you are encouraged to only use the Surface deck, consisting of just 12 traits repeated 10 times each. This is a great way to get a handle on the rules and I was very impressed by the diversity of the species you could create with just this simple setup.

Of course being the godlike beings that you are, one species is never enough and over the course of the game you will breathe life into many new creatures, watch them live, thrive, consume, and die. Each round you will alter or create species, one of them will then feed and all will age. Feeding increases the population of a species and can be gentle, foraging from the reef, or vicious as you attack any other species for its delicious population. As each species ages it loses population, and you get points. 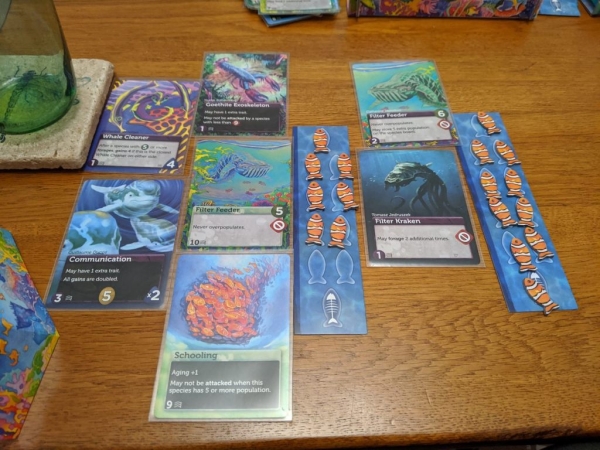 I went for a foraging strategy in this game. The purple bordered cards are from the deep deck.

This cycle of feeding and ageing is at the core of the game’s puzzle. Feed too much and you’ll overpopulate, losing momentum. Feed too little and your species will go extinct, forever wiped from the evolutionary map. As you can only feed with one of your species each turn, but must age all of them, figuring out how to keep all your species alive can be a real brain burner.

This puzzle becomes even harder with the arrival of the Cambrian Explosion, an event that occurs about halfway through the game as the oceans start to become drained of food. Now you can play two cards a turn instead of one, speeding up your species creation and alteration, allowing you to more dynamically respond to the changing game state. Ageing also accelerates, meaning more points but also more problems as you struggle to keep all your ocean dwellers alive. Maybe going deeper, down into the dark places of the world will give us answers to our problem.

Once you’ve gotten your brain around the basic flow of the game by playing through the Surface deck, things can get really weird. The deep deck is full of trait cards just like the surface one, but here every single card is different and powerful in its own way. Suddenly every species can have a totally unique trait, opening up new diversity and strategies. The Deep deck mixes the real with the fantastical, allowing the creation of Hydras, Leviathans, and more. It's a deck full of wonder, danger, and excitement and it really turns the game into a fantastic creative toolbox.

The Deep deck combined with the ever shifting scenario cards, changing the rules every time, makes every game of oceans unique, the parameters of the puzzle ebbing and flowing like the tide. I think by now you should have the impression that I really like the gameplay of Oceans, but that’s not to say that it is all pure, clear water. There is some pollution that we have to deal with first.

Oceans was funded through Kickstarter, and I picked up a limited edition copy at retail. This has components for five to six players and some extra shiny scenario and deep cards for about £55. The Kickstarter edition, also available at retail is £80 and included some card sleeves, plastic fish and bags for keeping your points in. I don’t need those, or so I thought.

On opening the game and cracking the cards open, I was really surprised at how poor quality a lot of the components were, especially the cards. The species boards are flimsy cardboard as are the miniscule screens for hiding your points behind. I could forgive this if the card quality was any good, but it is honestly some of the worst I’ve seen.

As someone who plays a lot of card based games, I am really fussy about cards feeling right. However you wouldn’t need to have my particular sensibilities to realise that the cards in Oceans are not up to the job. The card stock is extremely cheap, which feels flimsy and not up to the job of being shuffled. It’s so bad that all the cards have a slight upwards edge to them where they’ve been cut out of the sheet. For a game where the main component is cards this is simply not good enough and you are going to want to sleeve them before shuffling. 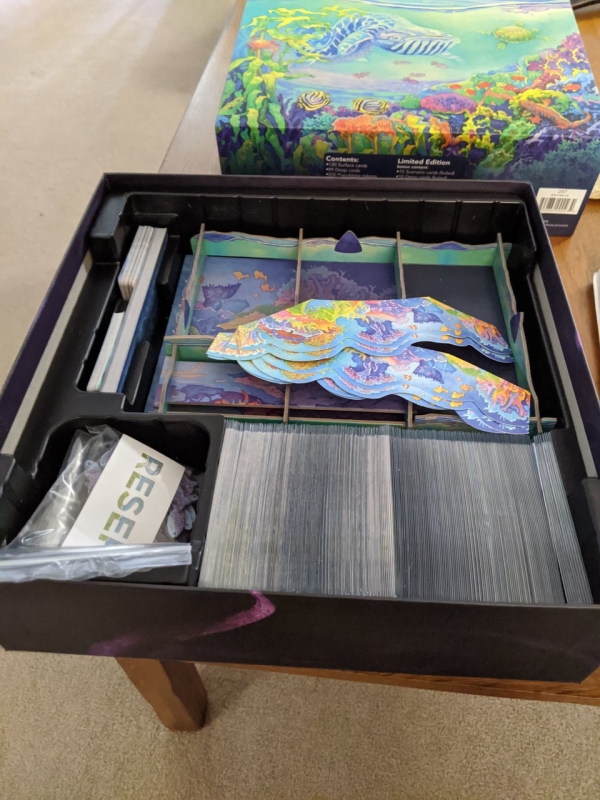 Why doesn't the weird insert hold everything. The rulebooks don't even sit flat. It's really odd.

The odd production decisions extend to the box. For a game mostly consisting of tokens and cards it is absolutely huge, with a really odd insert. Now you might think that there is room in this insert for expansions. No doubt there will be some, but I bought the version with components for 5-6 players, with extra species boards, tokens, and screens. The tokens are fine but the screens and species boards just have nowhere to go. The rulebooks don’t even sit in the box flat. The production decisions are just baffling.

For the most part I really like Oceans. It’s blistering fast and easy to teach, has loads of replayability, and every game feels genuinely exciting, every species bizarre and unique. It's a game that invites you to create, to dive into its waters, and tell us what you have discovered. I thoroughly recommend it with the caveat that you will want to sleeve the cards and that I really feel the game is let down by some poor production decisions.

I bought Oceans with my own money. I purchased the special edition that has the 5 to 6 player components in it but not the deluxe with the bags and plastic fish. Oceans was bought during the Covid-19 crisis of 2020 and has thus only been played 2 player at this time. I will update the review if I feel the experience of play at higher player counts is substantially different.