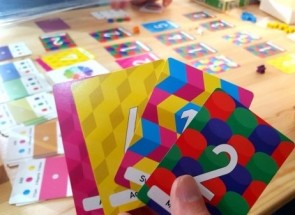 Theme in games is an emotive subject. Some gamers love theme tied strongly to mechanics, to others the theme is merely a surface layer to the crunchy mechanic centre, an artistic distraction and nothing else.

For me the theme is fundamental to my enjoyment of a game. I prefer mechanics to be tied strongly to the theme. More than that I want to see new, interesting themes and ideas that have never been attempted. Swatch is a game of mixing colours, a theme that I have never seen so I’ve been keeping my eye on it. Ever since meeting the designer Scott James at Tabletop Scotland, the game has intrigued me and Scott was nice enough to send us a copy for review.

A small box game, you know how I love those, Swatch is the first game from Scott and his imprint Minerva Games. The art and graphic design is also from Scott who is a graphic designer by trade. You can really tell that is the case with Swatch as everything about the game has nice, clean presentation and the information you need really pops out.

Consisting of a simple deck of cards and a bunch of counters, the aim in Swatch is to mix together Cyan, Magenta, and Yellow to create Red, Green, and Blue. Once created these RGB colours can then be used to grab a swatch of a particular pile from the central reserve (each of which is brilliantly named). Each player has their own hidden goal, and the first person to grab three swatches adhering to that goal is the winner. Sort of. We will come back to that. 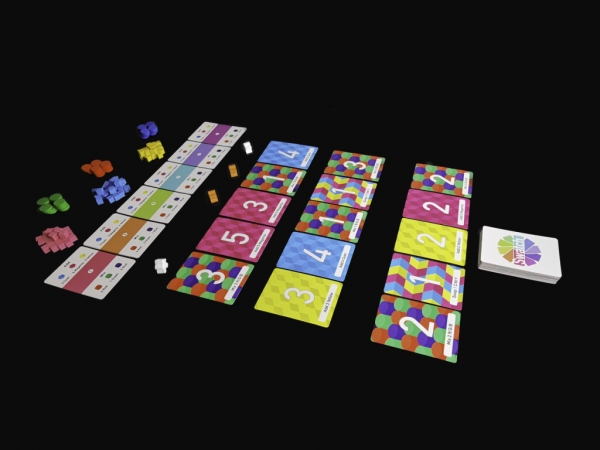 The field of battle (image provided by publisher)

Before you lies the arena of artistic battle; three rows of cards with numerous possibilities for obtaining the base colours you need, mixing them up, and swapping what isn’t mine for what you possess. Your palette of colours lies empty in front of you, begging to be filled with a rainbow of choices.

Rounds are very quick playing and there is very little in the way of downtime. When it comes to your turn, you plonk down an artist under one of the cards in the current active row and now you make a choice. Do you play the card for its effect, do you discard it, or take it into your hand for use later?

Despite the cards that allow you to swap colours between players, it is actually in these rows where the true player interaction of the game takes place: Jamie has tucked a card away for later, Iain has pushed into the next row (something you can do if you are the last player in a round) grabbing something I was planning to take. Always you are planning a couple of rows ahead, trying to make the most of your moves. On top of that the turn order is always in order of who is furthest left to who is furthest right along a row, a consideration that can make or break a play as you try to make the best move. This central puzzle alone would have been enough to make Swatch a compelling proposition.

The cards you are tucking away for later, and you get one each turn as well, can be played after you place your artist, giving each player an opportunity for surprises, dramatic swings, and the occasional gut punch to an opponent. 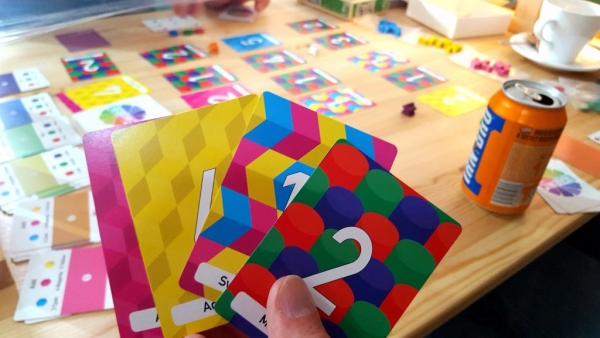 Iain C contemplates his next move (he won the game)

On the surface what I am describing here is a simple resource management game, with a worker placement-ish mechanic and a frisson of player interaction to spice things up. To leave you with that impression would be to do Swatch a disservice though. Swatch does throw resources at you, showers you with colours and big actions. You are reach the end, you claim your third objective, victory is within your grasp. Hang on a moment.

You see what Swatch asks of you is not to just manage your actions, to make the best choice at the time, but to make them as efficient as possible. To end with no resources at all. If you do not then you have to watch as the resources slowly drip away from you, one resource per turn. When the resources run out, then you can win but in the meantime everyone else keeps playing. This happens agonisingly slowly. Like watching paint dry.

Your opponents are now on a timer, but maybe they’ve played better than you. Maybe they’ve planned things out exactly whilst you swam in colours. Swatch is a resource management game, but it wants more than that. It wants you to be precise with its generosity, to only accept what you need and no more. To be wary of avarice. It is a game of resource efficiency, not just management.

I’ve played swatch at some different player counts and although it can take 2, it really shines at 3 and 4 and I would say that is the number you should look to hit. My only other slight negative is that we found a couple of the goals a little confusingly worded, but a recent update on the KS showed some new version of the goal cards that seem much clearer.

Swatch is a confident design from a new company that approaches its theme with enthusiasm and precision. The combination of a compelling central puzzle, simple but smart card play, and a drive for efficiency make for an interesting game that ties its theme strongly to its mechanics. For a first time designer this is a great calling card and I’ll be keeping an eye out for Scott James in the future.

Update: The Swatch Kickstarter has been cancelled recently, but I am sure Scott will be back soon.

The Giant Brain received a prototype copy of Swatch for review from Minerva games. Final product may vary.

August 12, 2020
Rating
4.0
Swatch
Swatch is a game of colour mixing and resource efficiency from new publisher Minerva Games. It's a confident design with some really interesting mechanics and a unique theme.
T
thegiantbrain Top 50 Reviewer 36 reviews