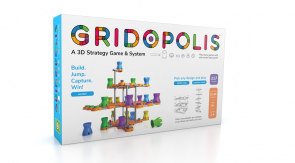 Building toy meets game but satisfies as neither.

Frankly speaking, I should have known better than to accept a review copy of Gridopolis. I’m withholding a star rating and I’m heavily qualifying my comments on here because it is not a game that we should have covered, but as I accepted the review copy I gotta make good on my end of the deal and I’m going to do so honestly and without reservation regardless of the comped game. It’s a rare negative review from me because I curate what I cover very carefully, and although I honestly did think this game looked interesting (which is why I took it on) it just doesn’t’ make the grade.

Here’s the deal. Gridopolis is the kind of game that you’d find at Zany Brainy or whatever “learning toy” store is still in business these days. It’s the kind of game hapless grandparents see and think “oh look, that looks fun AND educational!” And if anything sells toys to hapless grandparents (and parents, and aunties and uncles, and birthday present shoppers for that matter), it’s the illusion that what they are buying includes bonus learning. This starts even with toys for the very youngest children randomly imprinted with A-B-C or 1-2-3 as if plastic embossed with those letters and numerals is the seed from which a lifetime of academic success will grow. But of course, Gridpolis has that magic word “STEM” on the box so it automatically matriculates into the very highest echelon of edutainment toys. What parent or guardian doesn’t instinctively reach for their wallet when they see STEM these days?

Now, playing Gridopolis, I felt very much like a child who has been tasked with having fun with an unasked for STEM gift. I’ll pull no punches here – the basic game that is provided in the rules is absolutely dreadful. It’s sort of a multi-dimensional Checkers variant but with teleport pads, “Kingerizers” and a multi-tiered board with 3D jumping. The excitement (?) is that the board is constructed with a modular building set that is in no way as interesting or compelling as any of the leading brands in the construction toy field. I played it with my kids, right in the target age group for this game at 9 and 10, and I think they despised it only slightly less than I did. It’s simply not fun, and the multidimensional movement, teleporting, chain-jumping, and shifting boundaries led to gameplay that was far more capriciously frustrating and confusing than strategic or tactical. 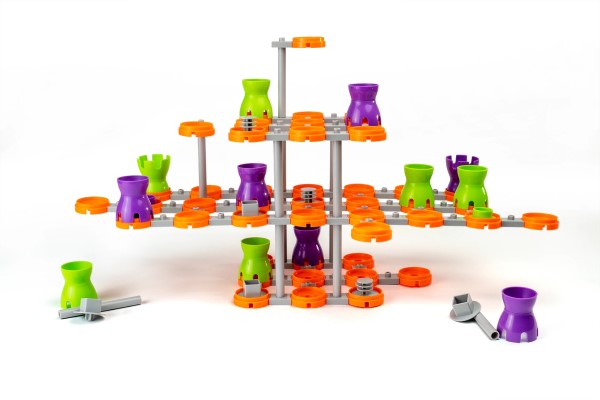 So the game in the box is bad, but Gridopolis is really sold as a game-building kit and the kids are supposed to use the connectors, beams, and assorted pieces to come up with a game of their own. There are also some example games you can play on the game’s web page. My kids fussed around a little with this aspect of the game, but really everything they came up and downloaded to build with was some variant of Checkers-style jumping, capturing, and traversal because that’s really what the format sort of wants to lock you into. I’m sure a more motivated, enthralled child could come up with something else- maybe even using the enclosed die to work up a Combat Results Table (CRT) or whatever, but the likelihood of them coming up with a decent game worth actually playing is quite restricted by what is on offer here.

As an abstract game it is a complete failure. Compared to the learning games on the shelf at Zany Brainy or wherever, it might hold its own and it likely will stand out when Grandma and Grandpa come a-shopping because it seems like a can’t miss prospect, with bespoke DIY game design promised on the box and all of that STEM big brain stuff packed in the box. But on this web site and in the hobby market, it is up against masterpiece abstract titles like Santorini, Kris Blum’s brilliant series, Blokus, Hive, Einfach Genial, War Chest, The Duke, FITS, Ubongo, and so forth. All brilliant, simple games derived from foundational abstract gameplay concepts but fixed in their genius. All of these are better, more innovative, and compelling games that are also accessible and appealing to kids.

Perhaps it’s not fair to hold Gridopolis up against these superior games as we are effectively talking about designs far beyond its league, but this is my frame of reference as a critic and I am not inclined to cut the game any slack because it’s a STEM activity or because it is built to encourage kids to make their own games. Sure, these are admirable goals and I support them. But most kids could likely design a more interesting and thoughtful game without the box full of plastic pieces that this game offers. I think back to some of the little games my kids have made without a box telling them to do so, using markers, posterboard, and a handful of random bits – a half decent auction thing called “Dino Zoo”, a Legend of Zelda-inspired adventure game – and then I watched them struggle to have fun coming up with anything using Gridopolis.

Thing is, this learning toy really wants you to have fun with it. It’s bright and colorful and when you set it up, it’s big and looks really cool. There were definitely some “oh wows” when we opened it up, but the gameplay just was not compelling for a family that is accustomed to hobby games and after a very brief honeymoon period of interest it’s sitting on the shelf unloved and unattended. But, remember, I am not the target market for this game and if you are reading this review coming from anywhere other than a Google search, you aren’t either. It may very well dazzle and delight kids in families where the most complex or intricate game on the shelf is Chess or for folks looking for something beyond Checkers.