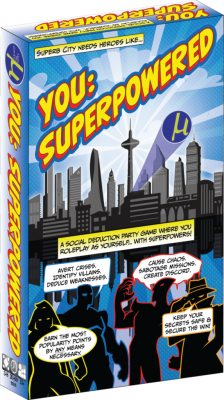 “A social deduction party game where you roleplay as yourself...with superpowers.”

You: Superpowered is a game that is constantly at odds with itself. It states it is social deduction party game but, it doesn't really work when you pull it out and drop it on the table during a party with casual gamers. Trust me, I tried multiple times. The game are too front loaded with fiddly rules and explanations. Even with groups who have played similar werewolf/resistance titles, the roles and execution just make it awkward.

The game has up to four roles, depending on the number of people playing. They are: Hero, Villain, Undercover Hero, and The Rogue. Heroes are bound by the above mentioned Hero code as they head out on missions to claim popularity points. That's right: the judge of how good of a superhero you are is based on ratings. Villains want to sabotage missions and have low popularity points. The Undercover Hero pretends to be a villain while still following the superhero code and The Rogue helps the heroes but wants to make sure they have the most fame for themselves by any means necessary.

The game really doesn't reward role playing. You are required to lay our your plan to complete a mission using your superpowers in 30 seconds or less. The “Judges”are the other players not currently on a mission. And if those judges are the villains or the rogue, they can vote to their their advantage while the Heroes must judge honestly. But what's that mean? If a player's solution honestly sucks and you are hero, you should fail them, right? But, at the same time, you want them to succeed as a hero. So, the gameplay and roleplaying are at odds with each other. And since the “characters” you play are literally yourself with superpowers, its easy for players to take it personally when you fail them on a mission.

Most of the deduction is done by simple memorization. If a player draws a Malite (the games version of Kryptonite) card of the color they are weak to when setting up a mission, they instantly lose the mission and must tell everyone that they lose (Bad luck, ole chum, looks like the luck of the draw revealed your weakness to everyone at the table). So, memorize that for later. And when you pick a sidekick for a mission, you show each other your weakness cards (file that information away as well). And hope you aren't playing a 7 or 8 player game, unless super memory is one of your real life superpowers because my idea of a party isn't sitting down with a pad and paper and taking notes.

Other portions of the game also just don't add up. During the missions phase the Undercover hero must still obey the superhero code. To appear like a villain, they are encouraged to ask questions or make comments that appear suspicious but ACT like a hero. HOWEVER, during the endgame (where, depending on the mission outcomes, either the heroes or the villains try to guess the role and weakness of each opposing player) the Undercover Hero is suddenly allowed to lie to conceal their secret identity. So, if we are going with Superman's old credo “Truth, Justice and the American Way” we can take out truth since you can lie when the game says you can. Justice is also optional since you still have to judge fairly (if you are a hero) even if you suspect another player is the Rogue or a Villain. So, it's Just the American Way, the American Way and the American Way? Do you want Homelander? Because that is how you get Homelander.

Even at it's best, with the right group and the right player count (which isn't easy to achieve), You: Superpowered never excels as a roleplaying game, a social deduction game or a party game.

January 03, 2021
Rating
2.0
You: Superpowered
Even at it's best, with the right group and the right player count (which isn't easy to achieve), You: Superpowered never excels as a roleplaying game, a social deduction game or a party game.