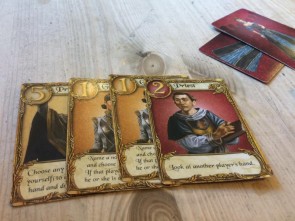 I had to get my message to the Princess. It was vitally important that she would hear this, but I had to be extremely careful. Many people were plotting against her, and against me, so nobody could be trusted. I had to try and get past the guards, the handmaiden and others to reach her. My heart was beating in my throat and my emotions were welling up. I tried to keep it together, because I was so close to delivering to her my Love Letter by Z-Man Games.

I know, Love Letter is almost a classic game, being eight years old. Yet, it still exudes a lot of charm and is a great game to introduce people to modern board games. It's really easy to teach and learn and relatively quick to play. Everyone starts with a single card and on your turn, you draw a card and then play one of the two cards you have in your hand now. It couldn't be easier really.

Of course, it's not quite as simple as that. The cards portray different characters from the royal court, such as guards, handmaidens, all the way up to the king - but the highest card of all is the princess. The aim of the game is to end a round with the highest card - and not be killed or otherwise die during the game. You keep playing until one player has won a certain number of rounds, depending on the number of players.

When you play a card, you get to carry out an action. One type of card allows you to swap hands with another player or make them, or yourself, discard their card and draw a new one. Another protects you from other cards, which is often very important, because a lot of the cards are about ousting other players.

You can try and guess what card someone has in their hand and if you're correct, they are out. You can also secretly compare cards with another player and if you have the higher card, they're out. In fact, most of the time you're trying to knock the other players out of the game and if you're the last player left, you win the round.

Each round in Love Letter is very quick, so even if you're removed early on, you don't have to wait long, because you're back in the game in the next round. Player elimination really isn't a problem in the game.

As you can probably tell, Love Letter is a bit of a memory game, because to play it well, you need to know what cards are still in play. Mind you, we always play it open, revealing which cards were played, making it a lot easier. Personally, I don't like the memory element in games where it's really just a matter of card counting, so we remove that element and it makes the game more accessible to a wider range of people as well.

Love Letter has a large luck element to it, levelling the playing field further, but it's not all about luck. You do need to consider which card to play and a bad decision can have fatal consequences.

There is also a good amount of social deduction in the game, because when you play with the same people regularly, you can probably tell if they've drawn a certain card and you do need to try and keep a poker face on as much as possible, so that you don't give away when you draw the princess for example.

The fun in Love Letter really comes from that social element for me. Drawing a card and deciding which of the two cards to play is great, but ultimately it's watching other players' reactions as they draw cards or when you announce that you want to compare hands with another player to decide who has the higher one. You keep an eye out for subtle tells to help you choose the player who has a low card and will therefore be removed from the round.

If you want a quick, fun game that is easy to teach and quick to play, then you can't go wrong with Love Letter.

January 16, 2021
Rating
4.0
Love Letter
If you want a quick, fun game that is easy to teach and quick to play, then you can't go wrong with Love Letter.
O
oliverkinne Top 50 Reviewer 47 reviews

Shellhead replied the topic: #319352 19 Feb 2021 12:56
Love Letter is a lovely product, but the player count should be increased by one. It is a crashing bore as a two-player game, but shines nicely with three or four players. The theme made it harder to get on the table, so I made my own set, re-themed for vampires in the World of Darkness. I also added some additional cards so that the game could scale up to six players. I haven't played Love Letter with six yet, but it plays well with five.

Ah_Pook replied the topic: #319364 19 Feb 2021 17:11
Agree @Octavian, my wife and I love Love Letter at 2. Super quick, super silly card game you can play on the porch while the weather is nice and you're drinking some drinks (or what have you). I think it's alright at 3, and wouldn't choose to play it above that. The fancy edition that they released that upped the player count to like 6 or 8 seemed like a poorly thought out product

jason10mm replied the topic: #319366 19 Feb 2021 18:25
I don't know if there are enough for their own article, but some of the LL variations, like the Marvel Thanos one, have a nice spin to it and play well with 3-5 players. Really nice hip-pocket lunchtime game!

jason10mm wrote: I don't know if there are enough for their own article, but some of the LL variations, like the Marvel Thanos one, have a nice spin to it and play well with 3-5 players. Really nice hip-pocket lunchtime game!

I ended up with the Batman version. It adds an VP if you play a Batman (1 card) and guess correctly the other person's card. Can't guess Robin. It also comes in a nice pouch that we just throw in a suitcase when travelling. Lord of the Rings themed one also has a Ring Card (and they are huge cards) don't remember that mechanic. The theme of the original is uninspiring and should be retired, no reason anyone should buy that one.

DarthJoJo replied the topic: #319402 20 Feb 2021 19:43
Never played it, but I did buy a batch of the marriage edition as gifts in that three-year span when all my friends got married. Original art but white pouch, the princess was in a wedding dress and everyone else in white?

The nice thing is that you don't automatically win if you have the best number at the end. You have to point out the treasure. There is a bit more information management that happens in the game. Also, one of the expansions really changes it, so that the winner is the one with the most points in their discard pile at the end (with a lot of card effects that mess with discard piles).
Read More...