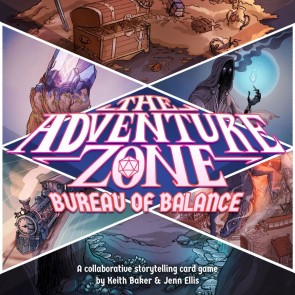 If you listen to podcasts, you may have heard of The Adventure Zone. The McElroy family put together a podcast chronicling their adventures in a Dungeons and Dragons (D&D) campaign called The Bureau of Balance. It was a smash hit that spawned graphic novels and a huge fan following, and now, a game. This game.

What is The Adventure Zone?

The Adventure Zone is a massively popular fantasy/comedy podcast run by the McElroy family. It started off as a pretty standard D&D campaign, but very quickly took a more story-oriented direction. The characters they created and the campaign settings grew their own universe, lore, and fanbase, and it’s incredible. I absolutely loved the Bureau of Balance arc, which spanned three years of episodes. The guys are funny and engaging, and the world and stories Justin McElroy created are amazing. Seriously, if you haven’t heard it yet, you should listen.

The show grew so popular that it spawned three graphic novels, and in an act of coming full circle, there’s now a game. That’s right, a game based on a podcast, that was based on a game. A bit like when you play with a Lego set based on the Lego Movie, which is a film about Lego.

And to think, they say creativity is dead. 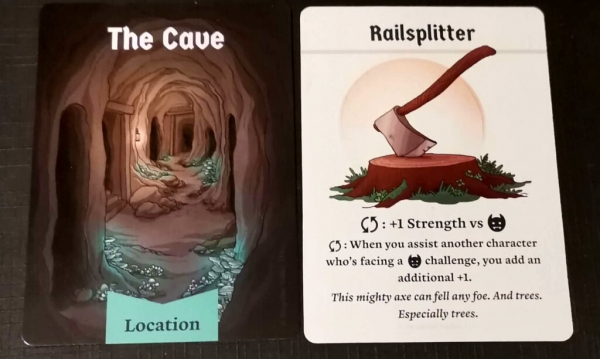 The artwork is great, and the iconography is clear and simple.

What you’ll be pleased to hear (if you came here to read reviews about board games and not RPGs that is), is that this game isn’t a reinterpretation of D&D. It’s not even close. It’s a game about the thing the podcast does so well: story-telling.

Once upon a time…

I believe that story-telling is woefully under-represented in board and card games. A few have made a worthwhile attempt at it, games like Tales of the Arabian Nights for example, but for the most part your options are extremely limited. I can understand why. So many games are built around the concept of a score and determining winners and losers, that something as fluffy and abstract as ‘telling a story’ is hard to incorporate. Nemo’s War 2nd Edition did a good job, but it’s still possible to play while totally blanking over the flavour text.

The Adventure Zone game immediately deals with the first of those problems, by making it a co-operative game. Everyone wins, or everyone loses. The second problem, that of scoring a story, is also handled well, but I’ll come to that later. 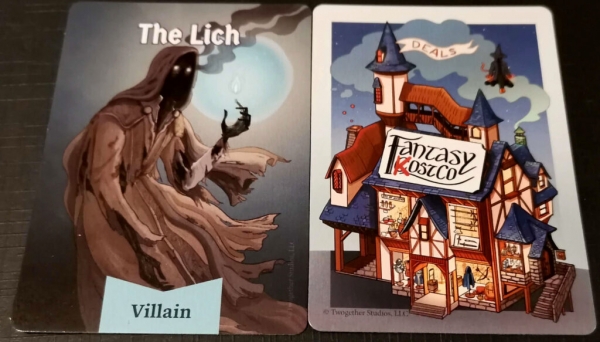 Fans of the podcast will recognise a Lich and Fantasy KostCo, home of Garfield, the Deals Warlock.

The game begins by choosing a villain, a relic and a location. Each has its own deck of cards, which are placed on their spots on the board. On a player’s turn they choose one of the face-up cards on the top of one of the piles, and try to resolve it. That card is something the team are trying to overcome, and to do that they add up the strength from their character sheet, any additions from items or other players assisting them, and the roll of a special D20. That number is compared to the big number printed on the card, and if the total is the same or higher, the players win. Any failures knock their health track down a step or two. (note: there seems to be an omission in the rule book around the numbers in arrows on the challenge cards. If the arrow on the card adjacent to the one you’re taking on shows ‘+1’, then you need to add 1 to that card’s strength)

Once the players get through the relic deck and either one of the other decks, they win. Hoorah! You might think that all sounds pretty lightweight as a game, and you’d be right, it is. Roll a die, compare some numbers, take a card. Not the sort of thing I normally go for at all. But to go into The Adventure Zone with the mindset of ‘this is a game to win’ would be missing a big part of what the game does, and does really well. 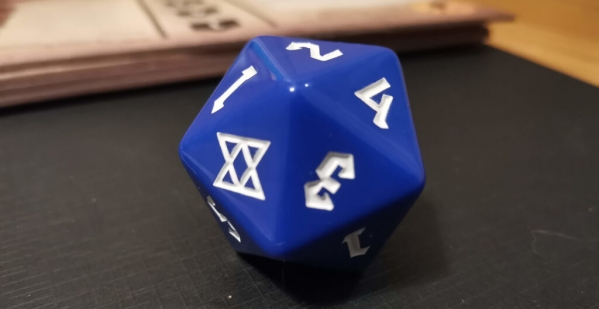 The TAZ D20, with its critical hit symbol – a guaranteed win.

The Adventure Zone is a mechanism to tell stories, first and foremost. To facilitate that, every game needs someone to act as the Team Leader. That role is akin to something like a Dungeon Master, and their job is to help create and steer the story unfolding on the table in front of them.

Each player takes a sheet for their character, in one of the five classes available, and gives them a name. They then answer three questions which have prompts on the sheet. There are some choices on the backs of the sheets for this, or you could roll the die to choose one, or even just ignore them and make up your own. This does a great job of getting the players invested with what’s going on, and sows the seeds of getting involved with the story. There’s even a space to doodle a picture of your character, which I suggest doing. No matter how bad your drawing ,might be, it adds to the immersion. 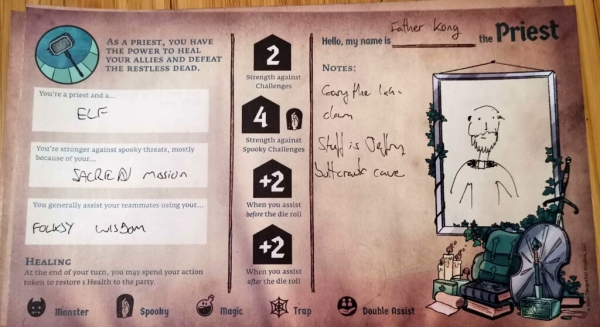 One of my player character sheets. This is Father Kong, the elven priest.

The team leader reads the descriptions of the villain, relic and locations, and creates the bare bones of the story, and why those three things are together. The players then decide on names and other details. The leader does the same thing whenever a new face-up card is revealed. It’s not enough to just say “There’s a terrifying illusion, a maze of realities, and a garbage pit“. Their job is to weave this all together into part of the narrative, so you end up with something more like “Deep in the bowels of this stinking garbage pit, we find ourselves trapped in a maze. Who would ever build a maze in a garbage pit, and why? And more importantly, what are we going to do about that terrifying illusion in the middle of it!?” Every time a new card is revealed, the story changes slightly, and it’s the players who keep the story going with their imaginations.

There’s a chance that you – the person reading this now – hate the idea of being called on to explain a part of a story. Maybe you don’t feel comfortable speaking in a group, or dislike having attention focused on you. Maybe you have difficulty articulating what’s in your head, or struggle with imagination. Keith Baker and Jenn Ellis, The Adventure Zone Game’s designers, recognise this, and there’s an entire section in the rule book devoted to being a good team leader. It explains how to get people involved when they find it difficult, by doing things like asking leading questions.

This is my favourite part of the whole game, well done designers.

Importantly though, it also recognises that some people are never going to want to come out and talk a lot, and it explains how to deal with that. I was so happy to read this section, it’s something I think is incredibly important when it comes to inclusivity and making people feel comfortable around a table. This level of care, and recognition that players aren’t just cookie-cutter games players (whatever that is) is something I really admire the creators for.

If players can be coaxed into talking and pushing the story along, it ends up benefiting them. Some of the cards in the game give prompts which, when acted on, add 1 to their strength for the encounter. For example, the card might be called ‘while opening the Sealed Vault‘, and the prompt on the card states ‘Who does this vault belong to? What stories have you heard about it?‘ If the player manages to explain this, they get that +1 bonus. If players are struggling with this elaboration, this is where the art of being a good team leader comes into play, moulding the game around the group at the table so that nobody feels uncomfortable. Asking open-ended questions, giving prompts, and interjecting if necessary. 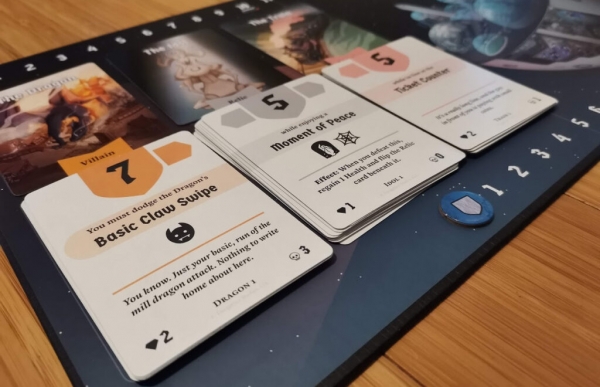 The board is nothing spectacular, but gives everything a place. This game is setup with the players trying to take an idol from a dragon, who’s got it hidden on a train for some reason. Let your imagination go wild.

This game follows the Bureau of Balance arc from the podcast, so let’s touch on balance for a bit. While there are rules in the game, and a way to play it to-the-letter with the right group, the beauty in this game comes with choosing where to ignore those rules. I’ve played this with my wife and eight-year-old son, and what he got from the game was the fun of making his character, and making up silly names. We took on Gary the Lich in Buttcrack Cave, and had to have a five minute break while he created a character sheet for our dog in the middle of the game.

That sort of situation is where this game shines. Did we follow the rules completely? Heck, no. Did we have a lot of fun because we ignored them? Absolutely! When done right, The Adventure Zone is brilliant. It’s so funny, the stories you create are elaborate, twisting and crazy, and it’s such a good way to spend time in the company of people you like. We’ve spent hours playing games of this when we might otherwise have been staring at a screen. That’s an absolute godsend at times like these when we’re all stuck at home with the same people.

This next part is important. If you’re going into this game expecting some kind of dungeon crawl experience, rolling dice, casting spells, you’ll probably be disappointed. I can’t stress enough that this is a game for making stories, it is not a standard board game. Set your expectations accordingly.

That being said though, this game will have a permanent place in my collection now, for The Future Times. I can see this being such a good ice-breaker for new players to a group, or for groups springing up after the pandemic. If you don’t like a rule, leave it out, or cheat and roll again. Who cares? Along the way you’re going to meet Barry Bluejeans, Steven the Goldfish, and go shopping at Fantasy Kostco, and you’re going to have a great time doing it.

Review copy kindly provided by Twogether Studios. Thoughts and opinions are my own.