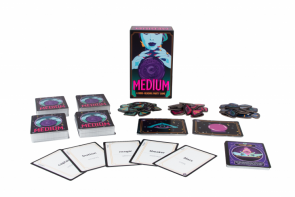 You look into your webcam and form a connection with a person. Across the ether you reach out, feel the formation of a word in your mind. A voice counts down from 3. As 1 is reached you both say a word, perfectly in time, perfectly attuned, proving that psychic connections exits. Aye, right.

Medium is a ‘mind-reading party game’ from design studio Storm Chaser games, art by Sarah Kelly and published by Greater than Games.

At its core Medium is a very simple game. Each player has a hand of cards, and on each card is a single word. Each round one player puts out a card face up and the player to their right follows doing the same. Now those two players reach out with their minds, both projecting a word that they think is the link between the two cards but does not feature on either. The connection is made and a countdown begins and on a 1 the two players say the word they have in their minds. If it is the same word they score a high value token, but if not they must try once more to reach out into each other’s minds. 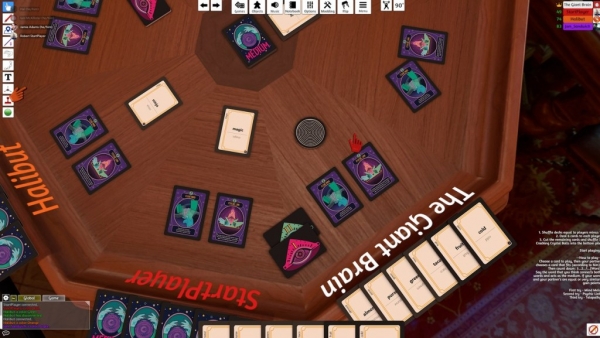 What word would you use to combine these two? Is your partner thinking the same thing?

A failure on the second attempt leads to the third and final go at forming a connection. You’ve guessed it, you can’t use any of the written or spoken words from the previous two rounds! Have you doubled down and dug even deeper, or is there a faint light of hope peeking over the rim of the pit you are in? Each attempt sees you taking points from piles with less and less points, so you should get it right the first time. Simple.

However attempt three goes the game moves to the next pair round the table made up of the person who played their card first last round and the person to their left. The game proceeds like this until three crystal ball cards are drawn from the bottom of the pile. Points you accumulate are between the various pairs around the table, and the team with the most will be deemed ‘Most Psychic’ or something.

It’s a simple concept, beautifully executed and delivered in a nice little package (although I did play the game on TTS due to ‘the situation’). You get 15 sets of cards which you combine some of to make your deck each time, giving a lot of variety in the cards that are being matched. It is a slightly odd setup, given the quick playing nature of the game but I suspect it is a design issue to make sure that there is a good spread of words amongst sets and to not have ideas repeat too much in a given collection of words. 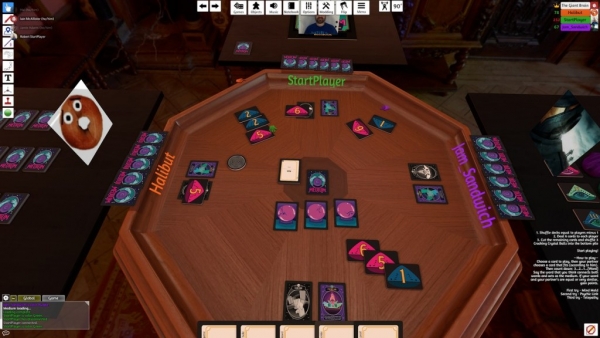 There is even an expanded game where you get some powers to play with, adding a little bit of tactics to the proceedings. Each player has two powers, worth points at the end of the game if they aren’t used. One of these allows you to discard your hand of cards and draw a new one, giving you more options to match but also hastening the end of the game as you hurtle towards the last third of the deck where the end game cards lie. The other allows you to jump into another pairings guess, scoring points for yourself if you match as usual. These points are yours and are added to the scores of both pairings you are a part of. Three way psychic connections are even more hilarious than two it turns out.

I was a little sceptical of yet another party word game, but this felt fresh with beautiful moments of elation and defeat. It’s fun to be part of a pair that gets it dead on, just as much as it is to fail repeatedly. We found ourselves even writing down guesses for other pairings and then showing what we guessed at the end; we were involved even when we were not actively playing. Medium is simple to teach, fiendish in execution and I can’t wait to play it in real life. Psychic connections are just weaker over the internet. Everyone knows that.

A physical copy of Medium was provided by Greater Than Games. Iain played the game on Tabletop Simulator due to current Covid restrictions in Scotland.

April 09, 2021
Rating
4.0
Medium
Iain puts his fingers to his temples, reaches out to your mind, and tries to tell you what he thinks about Medium via Telepathy. He also wrote it down, just to be sure.
T
thegiantbrain Top 50 Reviewer 36 reviews